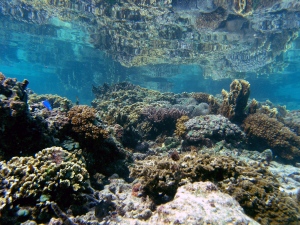 Researchers have uncovered a pattern of gene activity that enables some corals to survive in higher temperatures. The finding suggests a way to predict how different corals will fare in the warmer waters expected to result from climate change over the coming decades. Such information could help to focus future conservation efforts, the researchers say.

Some of the Acropora hyacinthus corals in the back reef of Ofu Island, American Samoa, are able to thrive in pools that experience daily heat fluctuations of up to 6 °C. To find the molecular basis of this resilience, the researchers compared gene activity in heat-resistant and heat-sensitive A. hyacinthus corals by measuring their ‘transcriptome’ — the complement of RNA molecules transcribed from the genes — under different temperatures.

The findings, published in the Proceedings of National Academy of Sciences today1, reveal a suite of genes that — though present in both populations — are more highly expressed in the temperature-resilient corals. These genes code for antioxidants and other proteins that organisms deploy in response to heat shock.

“We’re applying techniques that were basically developed for human-disease diagnosis to wild coral”, says the study's lead author Daniel Barshis, a marine molecular ecologist now at the Institute of Marine Science at the University of California in Santa Cruz.

The authors found that the expression of hundreds of the corals’ genes changed in response to their tank water being heated from the control temperature of 29.2 °C to 32.9 °C. But in the heat-resilient corals, around 60 of these genes were already more highly expressed at the control temperature. The authors think that this ‘front-loaded’ gene expression could be what gives these corals a survival edge in changeable conditions.

Study co-author Stephen Palumbi, a marine ecologist at Stanford University's Hopkins Marine Station in Pacific Grove, California, describes the back reef of Ofu Island as a training ground for climate change. “The corals here are exercised by low tides and high temperatures, and as they experience those high temperatures, they become tougher and tougher.”

“Climate change is happening rapidly, so it’s important to understand how organisms can respond to rapid change,” comments Ove Hoegh-Guldberg, a marine biologist at the Global Change Institute at the University of Queensland in Brisbane, Australia. He says that the results are a useful confirmation of the complexity of genetic response to thermal stress. But that complexity, he warns, “suggests that we’re not going to see corals rapidly evolving over the next decades in response to 1–2 °C changes in temperature.”

The team is now investigating whether the pattern of front-loaded genes is shared by other temperature-resilient coral species, with the aim of better understanding the process and potentially developing a diagnostic test to identify sites around the world where coral might stand a better chance of surviving global warming.

As they grapple with the inevitability of climate change and other threats such as development, some ecologists are beginning to embrace a pragmatic approach to conservation. “You can’t completely stop the bulldozers, and warming is going to happen", Palumbi says. "So you may as well at least try to keep the bulldozers away from areas where the coral can withstand the warming.”