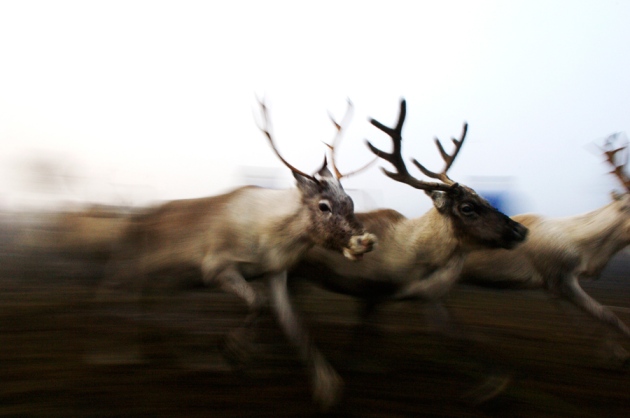 Arctic reindeer can detect ultraviolet light released from power lines, which may explain their avoidance of these structures.

Many animals, including some mammals and birds, are known to avoid power lines in remote regions. Now scientists propose that this behaviour may result from the sensitivity of some Arctic animals' eyes to ultraviolet (UV) light emitted from the cables.

Although some humans may find power lines and pylons aesthetic eyesores, the huge flashes of UV light they emit are beyond the limits of human vision.  However, to animals that can see in this visual range, power lines and pylons appear as “horrendous” structures sending “massive flashes across the sky”, says Glen Jeffery, a neuroscientist at the Institute of Ophthalmology at University College London.

Jeffery and an interdisciplinary team including an animal behaviourist and a physicist who specializes in power lines outline their theory in a letter published this week in Conservation Biology1. They propose that some animals, reindeer, rodents and birds, detect UV discharges as ‘corona’ of light along power cables and also as intermittent bright flashes from cable insulators — and that this may explain why reindeer avoid power lines.

“The animal knows ‘that part of town is bad news, and I’m not going there’,” says Jeffery, who researches the UV vision of animals with a special interest in how Arctic animals deal with the extended periods of light and dark that they are exposed to in the far north.

He and his colleagues note that although reindeer do not have UV-specific proteins in their eyes, their retinas nonetheless do respond to UV light2. These animals may also be more likely to react to UV flashes because of the increased sensitivity of their eyes, which are adapted to seeing in the long, dark Arctic winters. In addition, UV light is strongly scattered and reflected off snow, which may make the coronas appear brighter.

The hypothesis could have potentially serious implications. If power lines do represent a barrier to wildlife, they could prevent populations from mixing and limit migrations, says Jeffery. Evidence already exists that this may be a problem in some regions, but the underlying mechanism has remained unclear.

“The power industry has to think about where it’s putting its cables in relation to the ecology around it,” says Jeffery. Shielding around sections that create coronas and flashes may be needed, to create “safe” passing spots for wildlife, he suggests.

“The animal knows ‘that part of town is bad news, and I’m not going there’.”

The proposed explanation for why some animals avoid power lines is “a plausible suggestion, rather than a convincing theory”, says Michael Land, a neurobiologist who studies vision at the University of Sussex.

“Reindeer almost certainly can see UV (weakly) when dark adapted [to the extended Arctic winter darkness], and may well be able to see power lines in the dark,” says Land. “The fact that they also avoid them during the day, when UV light is everywhere, is puzzling, and it isn't clear why they should want to avoid the discharges anyway.”

Jeffery suggests that the animals learn to avoid the power lines and simply become conditioned to avoid them all the time. To test their theory, his team has developed a machine that generates a corona. Their next project is to transport this to the Arctic and study what response they get from animals.