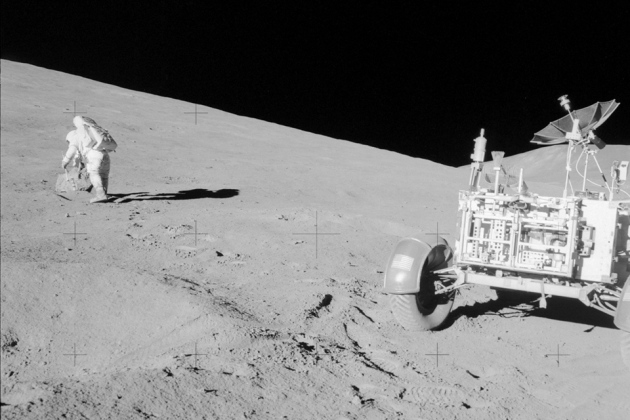 An Apollo 15 astronaut collects a soil sample on the Moon in 1971.

James Carpenter just needed some fake Moon dirt. Carpenter, a lunar-exploration expert at the European Space Agency (ESA) in Noordwijk, the Netherlands, works on a drill designed to hunt for buried ice on the Moon. His team recently ordered half a tonne of powdery material to replicate the lunar surface from a commercial supplier in the United States. But what showed up was not what the team was expecting. “The physical properties were visibly different,” says Carpenter.

His experience underscores a longstanding problem with artificial space soils, known as simulants: how to make them consistently and reliably. But now there is a fresh effort to bring the field into line. Last month, NASA established a team of scientists from eight of its research centres to analyse the physical properties and availability of existing simulants. And, for the first time, an asteroid-mining company in Florida is making scientifically accurate powders meant to represent the surfaces of four classes of asteroid. It delivered its second batch to NASA on 28 June.

“NASA is trying to conquer the Wild West of simulants,” says Philip Metzger, a planetary scientist at the University of Central Florida in Orlando.

Such materials are meant to mimic the mix of dust and broken rock that covers the surfaces of planets and asteroids. Engineers use the artificial soils to test space-exploration technologies such as drills and rovers, and to determine whether astronauts could make structures by feeding space dirt into 3D printers or by compressing it1. Scientists use simulants to explore geological processes such as how rocks weather in space.

The dirt on dirt

Over the years, space agencies and research groups have tended to make their own artificial soils as needed from mixtures of ash and grit, sand and crushed bricks, and even glass beads. This has led to a wild proliferation of soils; there are more than 30 lunar simulants alone2. “There are a lot of people out there creating their own simulant with no geology or materials-processing background,” says Jennifer Edmunson, a geologist at NASA’s Marshall Space Flight Center in Huntsville, Alabama.

Researchers do not always pay attention to those limitations, says Clive Neal, a lunar scientist at the University of Notre Dame in Indiana. “We have no accreditation in terms of what this can be used for and what it can’t be used for,” he says. “If you use it for the wrong thing you end up with misleading results.” 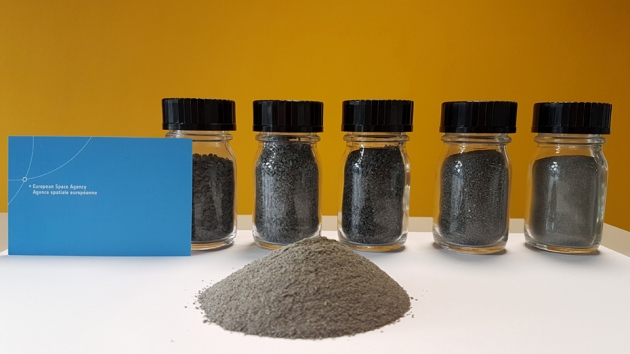 The European Space Agency produced this lunar simulant at its European Astronaut Centre.

In 2010, a panel of lunar scientists recommended that NASA develop a database that researchers could use to compare the characteristics of different simulants and pick the best one for each use. But the agency had no money to support such a project. The new working group aims to outline how much it would cost to produce a database covering simulants for all types of planetary bodies. “Hopefully, we’ll be able to develop this repository,” says Brad Bailey, associate director of NASA’s Solar System Exploration Research Virtual Institute, who is based in Washington DC.

The database would include the four new asteroid simulants being made by the Orlando office of Deep Space Industries, an asteroid-mining company. NASA has ordered five tonnes over the next two years. Each simulant is based on a different class of meteorites called carbonaceous chondrites, which are thought to be chunks of asteroids.

To make fake asteroid dirt, technicians mix various minerals — including bronzite, which is sourced from jewellery suppliers as polished stones — compress them into bricks and then pulverize them. “We have to do something that is basically equivalent to hitting a solid rock with thousands of meteorites over a long period of time,” says Stephen Covey, the company’s director of research and development.

Deep Space Industries delivered 512 kilograms of the first simulant to NASA in March, and 532 kilograms of the second type in June. The agency plans to use it in work on missions such as OSIRIS-REx, a spacecraft that is making its way to an asteroid to collect a sample and bring it back to Earth.

In Europe, Carpenter and his colleagues are still hunting for their perfect lunar soil — but they have given up on ordering it commercially. The researchers, who need 700 tonnes for a planned lunar habitat at ESA’s astronaut-training centre in Cologne, Germany, are looking much closer to home. They have decided to grind up rocks from the nearby basalt mines of the Eifel region.