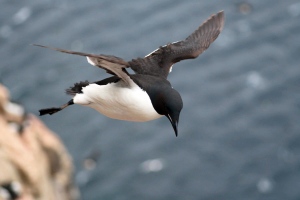 Murres are well adapted to diving but when it comes to flying their wings are some of the most energetically inefficient.

Like many birds, penguins must travel a long way between their feeding and breeding grounds. But rather than fly, they swim. It is a hard journey that has left biologists scratching their heads over why the birds did not keep their ability to fly as their diving ability evolved. A new study argues that birds cannot be both masterful divers and flyers, because flying abilities must weaken as the animals adapt to diving.

Rather than looking at penguins, a team led by biologist Kyle Elliott at the University of Manitoba in Winnipeg, Canada, examined species of diving seabirds that still have some ability to fly. These included the pelagic cormorant (Phalacrocorax pelagicus), a species that propels itself underwater with webbed feet, and the thick-billed murre (Uria lomvia), which flaps its wings underwater to swim.

The researchers tagged murres with recorders that measured the time of dives as well as depth and temperature, and cormorants with data-loggers that measured depth, temperature and acceleration changes during dives. They also injected isotope-tagged water into the birds. When the researchers tested the birds later, the tags enabled them to work out just how much carbon dioxide and water vapour the birds had expelled since the water was introduced, and thus to calculate the energy expended for diving and flying.

The team then compared their results to some that had already been collected for birds such as geese and penguins. They found that both cormorants and murres must spend exceedingly large amounts of energy to fly — the highest known among all flying birds.

When it came to diving, the energy costs for the foot-propelled cormorants were much higher than expected for a similarly sized penguin. The wing-propelled murres had diving costs lower than those of cormorants, but still 30% greater than those experienced by penguins of the same size. The results appear in the Proceedings of the National Academy of Sciences1.

The findings reveal a snapshot showing that murres are sitting on an evolutionary knife edge. Elliott and his colleagues speculate that because the wings of a murre are still built for flight, they create drag underwater. Furthermore, their small bodies, which are just light enough for them to take off, cool down more quickly than the bulkier bodies of penguins.

“Basically, they have to reduce their wings or grow larger to improve their diving, and both would make flying impossible,” says Robert Ricklefs, an ornithologist at the University of Missouri–St. Louis and co-author of the paper.

“The problem here is that the murres and cormorants lose heat in very different ways,” says ornithologist Rory Wilson of Swansea University, UK. “Murres carry a lot of air in their feathers and emerge from dives dry, while cormorant feathers get soggy,” he says. Wilson adds that cormorants may actually be reasonably efficient flyers but seem inefficient in this study because they are using a lot of energy to cope with cold wind blasting their wet bodies.

Others agree with Elliott's team. “It is great to so clearly see that flight is sacrificed for improved diving ability,” says James Lovvorn, an ornithologist at Southern Illinois University in Carbondale. “Now what we really need is an experiment that specifically takes the costs of staying warm into consideration.”