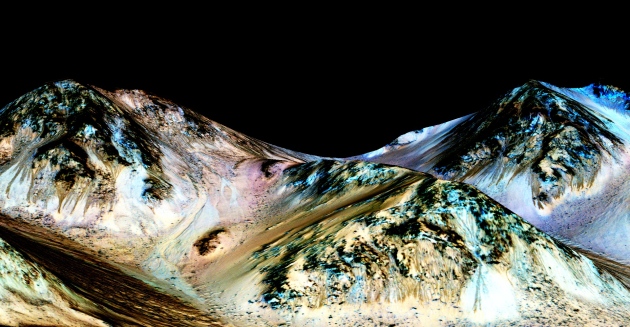 NASA scientists announced today the best evidence yet that Mars, once thought dry, sterile and dead, may yet have life in it: Liquid water still flows on at least some parts of the red planet, seeping from slopes to accumulate in what might be life-nurturing pools at the bases of equatorial hills and craters. These remarkable sites on Mars may be the best locations in the Solar System to search for extant extraterrestrial life — but doing so will be far from easy.

Examining potentially habitable regions of Mars for signs of life is arguably the primary scientific justification for sending humans there — but according to a new joint review from the US National Academy of Sciences and the European Science Foundation, we are not presently prepared to do so.

The problem is not exploding rockets, shrinking budgets, political gamesmanship or fickle public support — all the usual explanations spaceflight advocates offer for the generations-spanning lapse in human voyages anywhere beyond low Earth orbit. Rather, the problem is life itself — specifically, the tenacity of Earthly microbes, and the potential fragility of Martian ones. The easiest way to find life on Mars, it turns out, may be to import bacteria from Cape Canaveral, Florida — contamination that could sabotage the search for native Martians. The need to protect any possible Martian biosphere from Earthly contamination, the review’s authors wrote, could “prevent humans from landing in or entering areas” where Martian life might thrive. Although this sentiment is not new, its frank, formal acknowledgement in such an authoritative study is rare indeed. NASA is planning to send humans to Mars as soon as the 2030s; that such missions may unavoidably pose extreme contamination risks is understandably not something the agency is eager to highlight, even as it actively researches possible solutions to the problem.

Historically, in the context of Mars such “planetary protection” has primarily concerned robotic exploration. The risk of contamination is an issue even for machines, which, unlike humans, can endure being fried with radiation and bathed in harsh chemicals prelaunch to eradicate bacterial stowaways. Microbes that stubbornly refuse to die nonetheless turn up with regularity in NASA’s supposedly sterile clean rooms for preparing interplanetary spacecraft. Apollo astronauts even found bacteria on the Moon that had survived an almost total vacuum inside the robotic Surveyor 3 lander that had touched down more than two and a half years earlier. If terrestrial microbes could live in places like that, why not in some of the more habitable parts of Mars?

The United Nations Outer Space Treaty of 1967 forbids the “harmful contamination” of other worlds with Earth's biology, and an international organization called COSPAR (the Committee on Space Research) sets the planetary protection protocols for the United States, Europe, Russia and other signatory spacefaring nations to follow. To protect Mars, since 2002 COSPAR has designated restricted “Special Regions” on the planet where conditions are warm and wet enough to possibly support extant Martian life — or to allow Earthly invaders to gain a flagella-hold. Because of rapid, ongoing progress in our knowledge of the Martian environment and the fundamental limits of Earthly biology, the precise definitions for Special Regions remain works in progress that are officially revisited every two years. The new joint review, released last week, recommends revisions to the findings of a 2014 report on COSPAR’s Special Regions from NASA’s Mars Exploration Program Analysis Group.

The closer planetary scientists look at Mars, the more Special Regions they think they see. Special Regions pepper the planet’s equator and mid-latitudes, in eroded gullies and in steep, rocky slopes of hills and craters, where new evidence published September 28 in Nature Geoscience indicates that briny water flows and pools from aquifers during Martian summers. Special Regions can also be found in caves, beneath the polar ice caps and in geothermal hotspots of seismic or volcanic activity. As little as five meters below the surface, where groundwater may persist as ice, vast areas of the planet could be considered a Special Region, just waiting to be transformed into a welcoming, watery microbial Eden by the heat from a new-formed impact crater or the operations of a recently arrived spacecraft. Special Regions should also exist, the new review notes, at the still-unknown sources of mysterious methane emissions recently detected on Mars. On Earth it is generated chiefly by microbes but detectable quantities of the gas could also arise on Mars from abiotic sources, although those lifeless production routes would also require liquid water.

But knowing for certain whether any of these places are actually special probably requires visiting them — something that is very difficult to do under current protocols. Before a spacecraft can visit a Special Region it must in part or in whole be stringently sterilized according to strict rules, potentially adding years of development time and many millions of dollars onto a mission’s bottom line. Even then, the protocols may not be strict enough — current techniques are incapable of entirely cleansing a spacecraft of microbes, and no one really knows the threshold conditions for bacteria to create viable, self-sustaining colonies on Mars — or on Earth, for that matter.

The agency’s first — and to date only — missions to Mars explicitly in search of life were the twin Viking landers, which landed on the red planet in 1976. All others since have focused on finding signs of life from Mars’ ancient past rather than its present. If even sterilized robots cannot be trusted to venture into Special Regions, what about microbe-riddled humans? If astronauts shall only be allowed to visit subpar locales to search for life on Mars, can NASA or any other entity justify the tens to hundreds of billions of dollars required to send them there? If a human crew lands in an area thought unpromising for biology but discovers habitable conditions or even something living there, would they have to immediately relocate, or even pack up their rocket and launch back to orbit? These and other unanswered questions show how in many ways, discovering a present-day Martian biosphere could be both the realization of NASA’s wildest dream and its worst nightmare. They explain as nothing else can the otherwise inexplicable fact that in the quest for extant life on Mars NASA has been judiciously avoiding the very places where it may most likely be found.

Carl Sagan famously mused that if life is ever found on the fourth rock from the sun, “Mars then belongs to the Martians, even if the Martians are only microbes.” In this view the planet would become a sacrosanct sanctuary, forever off-limits to encroaching humans. An alternate perspective holds that planetary protection efforts are futile, perhaps even naive: Thanks to likely contamination from earlier spacecraft, as well as ancient exchanges of material blasted between the planets by massive asteroid impacts, Mars has probably already experienced many waves of Earthly invaders — each of which could have been easily repulsed by any native, more adaptively fit biosphere.

Amid all the uncertainty, the new review notes, one thing is very clear: “The planetary protection implications of sending astronauts to Mars raises profound questions at the intersection of science, engineering, technology, project management and public policy.” The statement’s true meaning for NASA and other space agencies should be equally clear: Although inconvenient, the planetary protection issues associated with crewed missions to Mars are too severe to be dismissed, dodged or downplayed. Now is the time to begin addressing them. Otherwise, human voyages there may at best prove to be nonstarters and at worst become fiascos that forever extinguish hopes of studying pristine examples of Martian life.