History is rich with 'eureka' moments: scientists from Archimedes to Isaac Newton and Albert Einstein are said to have had flashes of inspiration while thinking about other things. But the mechanisms behind this psychological phenomenon have remained unclear. A study now suggests that simply taking a break does not bring on inspiration — rather, creativity is fostered by tasks that allow the mind to wander.

The discovery was made by a team led by Benjamin Baird and Jonathan Schooler, psychologists at the University of California, Santa Barbara. The researchers presented 145 undergraduate students with two 'unusual uses' tasks that gave them two minutes to list as many uses as possible for everyday objects such as toothpicks, clothes hangers and bricks. 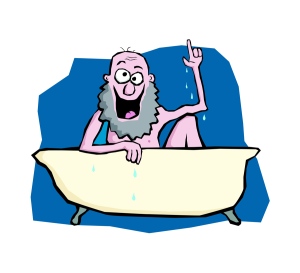 Archimedes made his breakthrough discovery of displacement while relaxing in the bath.

After the two minutes were over, participants were given a 12-minute break, during which they rested, undertook a demanding memory activity that required their full attention or engaged in an undemanding reaction-time activity known to elicit mind-wandering. A fourth group of students had no break. All participants were then given four unusual-uses tasks, including the two that they had completed earlier.

Those students who had done the undemanding activity performed an average of 41% better at the repeated tasks the second time they tried them. By contrast, students in the other three groups showed no improvement. The work will be published shortly in Psychological Science1.

“We’ve traditionally found that rapid-eye-movement sleep grants creative insight. That allowing the mind to wander does the same is absolutely fascinating. I think they are on to something really interesting here,” says Sara Mednick, a psychologist at the University of California, Riverside.

“This finding really plugs a hole in the literature,” agrees John Kounios, a psychologist at Drexel University in Philadelphia, Pennsylvania.

Participants who engaged in the undemanding task did not do any better than others on unusual-uses tasks that they encountered for the first time in the second round. “The implication is that mind-wandering was only helpful for problems that were already being mentally chewed on. It didn’t seem to lead to a general increase in creative problem-solving ability,” says Baird.

The upside of zoning out

As well as revealing that breaks on their own do not encourage creative thinking, Baird’s work suggests an explanation for one of psychology’s great mysteries: why we zone out.

From an evolutionary perspective, mind-wandering seems totally counterproductive and has been viewed as dysfunctional because it compromises people’s performance in physical activities. However, Baird’s work shows that allowing the brain to enter this state when it is considering complex problems can have real benefits. Zoning out may have aided humans when survival depended on creative solutions.

“There is a real possibility that mind-wandering is so common because evolution has selected for it over time, but before we can come to that conclusion we have to ascertain whether it’s genetically determined,” says Kounios.