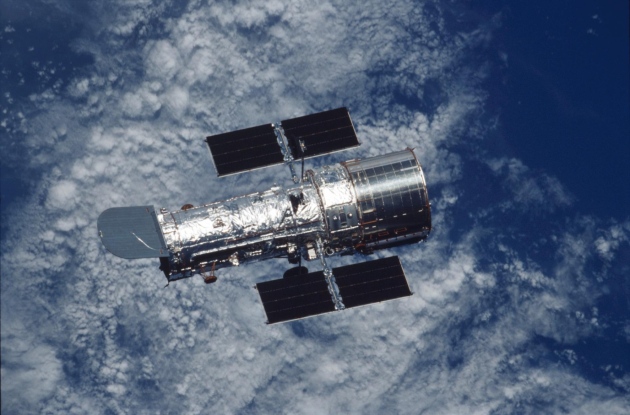 The Hubble Space telescope will set its gaze on a possible exomoon later this year.

The high-profile quest to spot moons orbiting distant planets has been a series of let-downs, with each hint of an ‘exomoon’ fading under closer inspection. So astronomer David Kipping, at Columbia University in New York City, didn't want to reveal his team’s detection of another possible exomoon, until they could confirm it using the Hubble Space Telescope.

That plan was abandoned a few days ago, after news of the team’s request for Hubble time rocketed around social media. It culminated in the announcement that “exomoon candidate Kepler-1625 b I” had been observed orbiting a planet 4,000 light years (1,230 parsecs) from Earth, in an arXiv preprint1 posted on 27 July. That paper, reporting the results of a 5-year search for exomoons, was hastily amended to include the exomoon claim.

Kepler-1625 b is a candidate planet that Kepler, NASA’s flagship exoplanet mission, had previously observed. Periodic dips in the host star’s brightness indicated that a massive object was crossing the line of sight from the star to Earth; but the dips were lopsided, suggesting that perhaps instead of one object there were two: a Jupiter-sized planet with a Neptune-sized moon in tow. If this were indeed an ‘exomoon’, it would have been a long-awaited discovery. But it was still a big if.

“It wasn’t something we were planning on announcing, because at this point it’s only a candidate,” says Kipping, who would have preferred to be more cautious with the news. “It really only takes the slightest misstep in our language to miscommunicate the reality of what we have.”

But his hand was forced this week, when another astronomer noticed that Kipping’s team had requested time on the Hubble Space Telescope in October and shared the news on Twitter. Kipping is one of the most prominent astronomers in the hunt for exomoons. So if he wanted to use the Hubble, there was only one possible reason.

Kipping says he does not blame the colleague for tweeting about something that was in the public record. But then, on 25 July, his phone started to ring: journalists were wondering whether Kipping had made the big discovery he had focused his whole career on.

So, to pre-empt speculation, the team decided to be transparent about what it had found — and about what it hadn’t. “We figured the only option we had was to get ahead of the story,” says Kipping. As news reports appeared, one of the authors of the arXiv preprint, Alex Teachey, wrote a guest-blog post for Scientific American to explain his team’s decision.

“Let’s be clear: we’re not just trying to save ourselves from embarrassment,” Teachey wrote. “The announcement and subsequent retraction of potentially ground-breaking results has the effect of eroding public trust in science over time, and we are chiefly concerned with not contributing to that problem.”

Jean Schneider, an exomoon hunter at the Paris Observatory, says that the authors were right to make this candidate public. Now, he says, “other people can re-analyse the Kepler data for Kepler-1625 b and make their own opinion”.

Astronomer David Bennett at the University of Notre Dame in Indiana agrees. “I don’t consider it to be terribly controversial to put a paper on the arXiv before it is peer reviewed,” he says. “It is often the case that the journal doesn’t really find the best person to review the paper,” he adds. “If it is posted on arXiv.org, then you might get much more useful comments from a real expert who wasn’t picked by the journal to review the paper.”

Astronomers have spotted potential exomoons before, only to find after gathering more data that the orbs weren't really there. “I’ve seen moons evaporate,” Kipping says. In the past, confounding factors such as instrumental glitches have been found to mimic the signature of an exomoon. He considers the latest prospect exciting because, so far, it has survived all the tests that have shot down previous contenders.

After they look at the star again in October with Hubble, Kipping says that he and his team will take around six months before they announce the result of their observation. Unless, perhaps, the news gets ahead of them again.