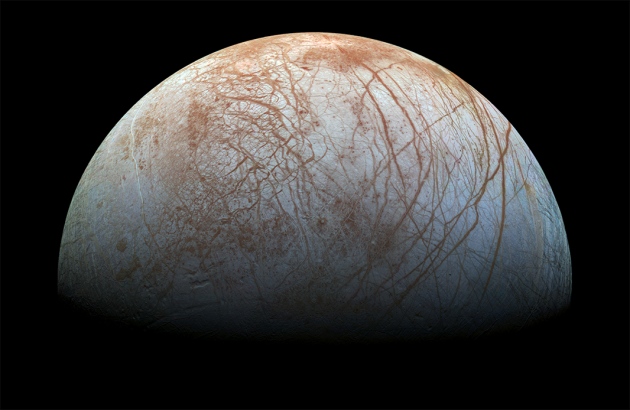 Sometime in the early 2030s, NASA hopes to attempt a landing on Jupiter’s moon Europa. A four-legged spacecraft would descend towards the icy surface, ready to hunt for signs of alien life in a buried ocean.

But Europa could be a treacherous place to land. Its surface may be unexpectedly hard — or so porous that the probe might sink into it. And giant crevasses threaten to swallow any visitor. With an extremely thin atmosphere, low gravity, and bone-chilling temperatures of just 100 kelvin (–176 °C), Europa poses formidable challenges to spacecraft engineers.

“We really just don’t know enough,” says Cynthia Phillips, a planetary scientist at the Jet Propulsion Laboratory (JPL) in Pasadena, California. She and others are discussing ideas for a Europa lander this week at the Lunar and Planetary Science Conference in The Woodlands, Texas.

Prompted by the US Congress's enthusiasm for visiting icy worlds, NASA is working on a pair of spacecraft concepts for exploring Europa, to launch in the 2020s. The first, an ongoing project named Clipper, would fly to the Jupiter system and loop past Europa multiple times, photographing it and creating a new high-resolution map of the world. The second spacecraft — not yet formally approved, and left out of President Donald Trump's recent budget proposal for NASA — would follow perhaps several years later and land on the moon.

One challenge is finding a suitable landing site. Europa’s surface is riven by crevasses, possibly with geyser-like plumes of water occasionally spurting up through the cracks. One of the top candidates for a landing site is an area called Thera Macula, where iceberg-like blocks jostle against one another in what is evocatively known as “chaos terrain”.

Arriving there could be like trying to touch down on a glacier in Greenland spawning ice chunks, says Catherine Walker, a planetary scientist at JPL. “I don’t know if you really want to land on that,” she says. 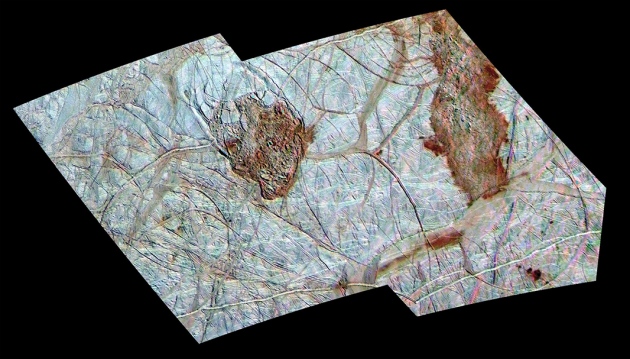 The Thera Macula region is one site where NASA could one day send a Europa lander.

If there are at least 100 cells of extraterrestrial organisms in every millilitre of Europan ice, the lander’s instruments could detect them, according to a NASA report released last month. That’s comparable to the number of microbes in the ice overlying Antarctica’s buried Lake Vostok.

“For the first time in the history of humanity, we have the tools and capability to go and do this great experiment of seeing whether or not biology works beyond Earth,” says Kevin Hand, an astrobiologist at JPL. He co-chaired the new report, which is being discussed this week at the Texas meeting.

But so little is known about the surface properties of Europa that planning a lander is like planning the first Moon landings, Phillips says.

Temperatures are so cold that ice grains on Europa behave very differently from on Earth. Phillips and her colleagues, led by Jamie Molaro at JPL, have been studying how Europan ice grains might 'sinter' or merge together, becoming more dense. Theoretical modelling and lab experiments, intended to grow tiny chunks of Europa-like ice, show how the ice grains begin to stick together over time. That process will affect how the lander's footpads interact with the surface, Phillips says.

The lander has to survive intact enough to burrow 10 centimetres into the ice, collecting five samples in 20 days and then analyzing them for signs of life. Current mission designs call for a four-legged lander with a flat belly, able to land on rough ice with unknown properties. It would be the first touchdown in the outer Solar System since 2005, when the European Space Agency’s Huygens probe parachuted onto Saturn’s moon Titan.

“When Huygens was built, we had no idea if Titan had a liquid or a solid surface,” Phillips notes. “That was a crazy engineering challenge.”

Europa engineers are facing much the same thing today.