As jellyfish pulsate, they a produce spinning vortex of water (red/orange) that gives them an extra boost.

The sockeye salmon is a sleek torpedo that uses its strong muscles to leap up waterfalls. The moon jellyfish (Aurelia aurita) is a flimsy blob that drifts along like a gently pulsating bell. The salmon is obviously the more powerful swimmer, but a study has revealed that the jellyfish outclasses it in efficiency. For its mass, the jellyfish spends less energy to travel a given distance than any other swimming animal.

Brad Gemmell at the Marine Biological Laboratory in Woods Hole, Massachusetts, has found that the moon jellyfish has a unique way of recapturing some of the energy spent on each swimming 'stroke'. It uses the technique to give itself an extra push without moving its muscles, travelling farther at no added energy cost. The findings are published this week in Proceedings of the National Academy of Sciences1.

Gemmell started studying moon jellyfish as part of a US Navy-funded project to look at unusual methods of locomotion in marine animals. As he analysed their movements, he noticed that they picked up a little burst of speed at a point when their bodies were still. “We first discounted these blips, but every species and every run we looked at had them,” he says. “They clearly weren’t noise in the data.”

To study this speed boost, Gemmell paralysed some moon jellyfish with magnesium chloride solution, which blocks nerve signals from reaching their swimming muscles. He then pushed them forward with a mechanical rod, analysing how water flowed around them.

When moon jellyfish contract their umbrella-shaped bells, they create two vortex rings — doughnuts of water that are continuously rolling into themselves. The creature sheds the first ring in its wake, propelling itself forward. As the bell relaxes, the second vortex ring rolls under it and starts to spin faster. This sucks in water, which pushes up against the centre of the jellyfish and gives it a secondary boost (see video above). 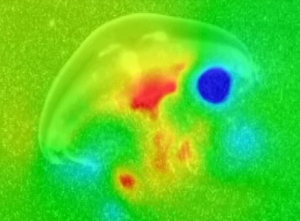 A spinning vortex of water creates a region of high pressure (red/orange) under the jellyfish.

The bell is so elastic that it relaxes automatically, which means that the speed boost costs no extra energy. It allows the jellyfish to travel up to 80% farther for nothing.

These results contradict the typical view of jellyfish as inefficient swimmers, and might help to explain why large blooms of them can sometimes displace shoals of fish. But the jellyfish's technique works only at low speeds and relatively small body sizes, says Frank Fish, who studies swimming animals at West Chester University in Pennsylvania. Moon jellyfish might be efficient, but they cannot beat fish in terms of speed, acceleration or manoeuvrability. “Performance must be balanced with energy cost,” says Fish. “I have a motor scooter that gets 100 miles to the gallon, but I cannot drive it on the highway when I want to get somewhere fast.”

Still, Gemmell says that the moon jellyfish's energy-saving trick might be useful when designing ocean-going machines — from floating buoys to autonomous underwater vehicles. “You could deploy them for longer without extra batteries, size or maintenance,” he says.