Phantom clinical trials are a well-known phenomenon in biomedical research. Trials are conducted, but the results never see the light of day. To tackle this, the World Health Organization (WHO) released a statement in PLoS Medicine1 on 14 April calling for full disclosure of clinical-trial results — a stand that drew wide support from commenters on social media. Antonietta Filia, an epidemiologist at Italy’s National Institute of Health in Rome tweeted:

Joseph Hayes, a psychiatrist at University College London, suggested in a tweet that such a policy would uncover many less-than-spectacular results. 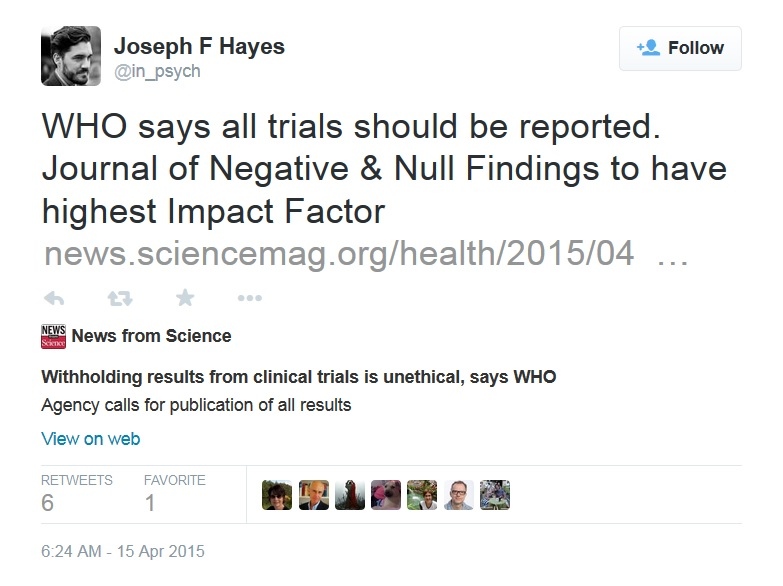 The WHO statement called for every clinical study to be publicly registered before the trial even begins. Within one year of the study’s completion, researchers should publish key outcomes in a public registry and submit the main findings to a peer-reviewed journal. Incomplete disclosure of results, the statement explains, leads to poorly informed decisions about research funding, regulations and public health.

Pressure to make clinical-trial results public has been mounting over the past few years as more organizations — including the World Medical Association and the US Food and Drug Administration — have made similar calls or have proposed or mandated the reporting of results in various clinical-trial registries. The WHO statement goes further by calling for studies to be published in a journal with open access or otherwise be made available to the public within 24 months of the trial’s completion, and by urging publication of results from past trials that have remained unreported.

Such requirements are often ignored. A 2013 study in the British Medical Journal showed that out of 585 large clinical trials, 171 studies involving nearly 300,000 patients were still unpublished some 5 years after completion.

To boost compliance, funding agencies, industry sponsors and research institutions need to conduct routine audits, wrote Ben Goldacre, a research fellow at the University of Oxford, UK, in a companion piece in PLoS Medicine2. “We need to audit all trials to see which companies, researchers and institutions are the biggest offenders,” he said in an interview. Goldacre, a long-time advocate for full reporting of clinical-trial results, added that when possible, researchers who withhold data should be denied access to patients for future studies.

Steven Novella, a clinical neurologist at Yale University School of Medicine in New Haven, Connecticut, agreed in a blog post that enforcement will be key. “The WHO statement is a step in the right direction, although it needs to be backed up with more teeth,” he wrote on the Science-Based Medicine blog.

WHO representatives admit that it won’t be easy to ensure full disclosure. As they wrote in their companion piece in PLoS Medicine, “incentives and legislation are needed to achieve compliance.”