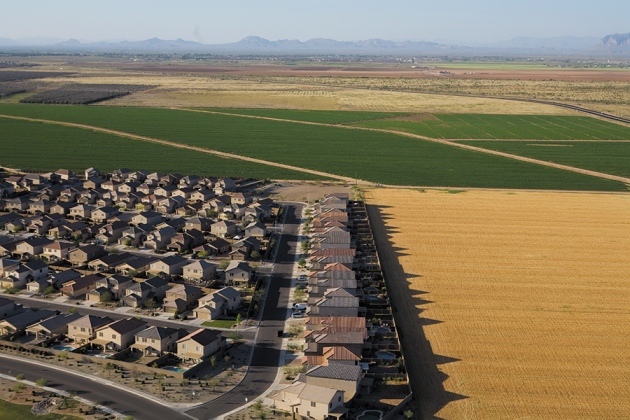 Urban-region plans need to maximally sustain farmland and nature, while creating viable communities instead of sprawl.

By 2030, 1.1 billion more people will live on Earth — bringing the total to about 8.5 billion. Most of them will arrive in dense Asian and African cities, exacerbating pollution and resource shortages1. Urban expansion alters a city's 'big seven': natural vegetation; agricultural land; clean water; jobs; housing; transport; and communities. Rapidly growing cities such as Kano, Niamey, Sikasso and Bobo-Dioulasso in sub-Saharan West Africa, for example, are already converting woodlands into irrigated farmland to feed their rising populations2.

A new approach to planning cities is called for: one that is both global and regional. It must consider which areas are best placed to support higher populations without greatly increasing the already heavy ecological footprint on our finite Earth.

Globally, planners should prioritize development in the most suitable (or 'least bad') areas. That rules out regions that are populous, resource-poor or hotspots for native biodiversity. It points to places that have the warm and moist climates amenable to growing crops, such as grassy and forested lands in temperate and tropical regions. We see promise in large areas in the Americas, central Africa and Asia as well as pockets of Oceania.

Second, metropolitan regions need to manage where they absorb new arrivals. Currently people often concentrate in cities or areas of urban sprawl (see Nature 467, 900–901; 2010). Instead, compact settlements along the urban fringe and in surrounding satellite cities and towns should be encouraged. This provides space for sustainable communities and limits the loss of valuable land. Managed satellite-city growth can be seen around Barcelona, Spain, and compact communities have been established around Portland, Oregon, and Canberra, Australia.

Such a vision demands worldwide coordination. It will require international and national policies for environmental protection, urban development and human migration. And each city must develop an urban regional plan.

A working visit by one of us (R.T.T.F.) to Barcelona in 2002, including a memorable helicopter ride, showed how such planning can work3. Below, the city's chief planner had gathered mayors and leaders from across the region. Their conversation went something like this: “We're wasting land! We're all in this place together. No American sprawl wanted here. Save and improve our tight water supply. Rein in the floods. Stop shrinking our parks and conservation areas. Don't stick band-aids on our transportation system. We need long-term economic strategies. Tourists and grapevines will not like our warming climate.” Such conversations are needed to galvanize support for planning whole urban regions.

Like a tsunami, urbanization moves powerfully and swiftly across the land. City limits bulge; satellite cities grow; strip developments and sprawl spread. These last two are the most detrimental to the environment3, 4. The reason why expansion is so damaging harks back to the origins of cities. Most settlements began on good agricultural soil near a body of fresh water and natural vegetation4. Buildings, cultivation, pasture and woodland often evolved in concentric rings. Episodes of urban expansion therefore cover or pollute once-valuable natural resources at ever increasing range. Meanwhile, the exploding urban population is inundated with solid waste, wastewater, heat and pollutants.

This pattern applies to cities of all sizes, from small (fewer than 500,000 people) to mega (more than 10 million people). Around the edges of the small and mid-sized US cities of Salt Lake City in Utah, and Denver in Colorado, for instance, good agricultural soil has been covered with houses. Expanses of natural ecosystems have shrunk and become fragmented and degraded. Semi-wild wooded recreation areas lie farther from the city's people. Wells have lowered the water table, dried out streams and wetlands and made wildlife scarcer. Similarly, Seoul has converted a greenbelt into a ring of parks that is separated by highways and new communities. Urban sprawl has taken place around cities across China at unprecedented scale and speed.

Climate change makes things worse by increasing the number and severity of heat waves, droughts, floods and days of bad air quality5. Expansion of coastal cities — such as Guangzhou, Mumbai, New Orleans, Osaka and Vancouver — puts more people at risk of flood damage from sea-level rise. The urban poor are among the most vulnerable.

Meanwhile, global food production will need to increase enormously. Feeding 1 billion new mouths only 14 years from now without drastic changes to the food system could require a few hundred million new agricultural hectares, an area about the size of Greenland, even India6.

To see which areas of the world have physical conditions that could theoretically accommodate an extra billion people sustainably, we overlaid maps of seven variables from The Atlas of Global Conservation7. We ruled out regions with extreme or high water stress; other arid areas; tundra and ice; centres with species unique to a region; and regions with population densities that exceed 100 people per square kilometre, namely much of Europe, the Middle East, India and China and the western United States.

That leaves large areas of South America; parts of southern Canada and the northern and eastern United States; south-central Africa; parts of Asia north of the Himalayas and from the Black Sea to north China; and scattered parts of Oceania (see 'Habitable zones'). Some moist tropical areas could support crops such as cacao, coffee, oil palm, rice and maize (corn). But development should be prohibited in biodiversity hotspots such as Borneo, northern Queensland in Australia and parts of the Amazon basin. 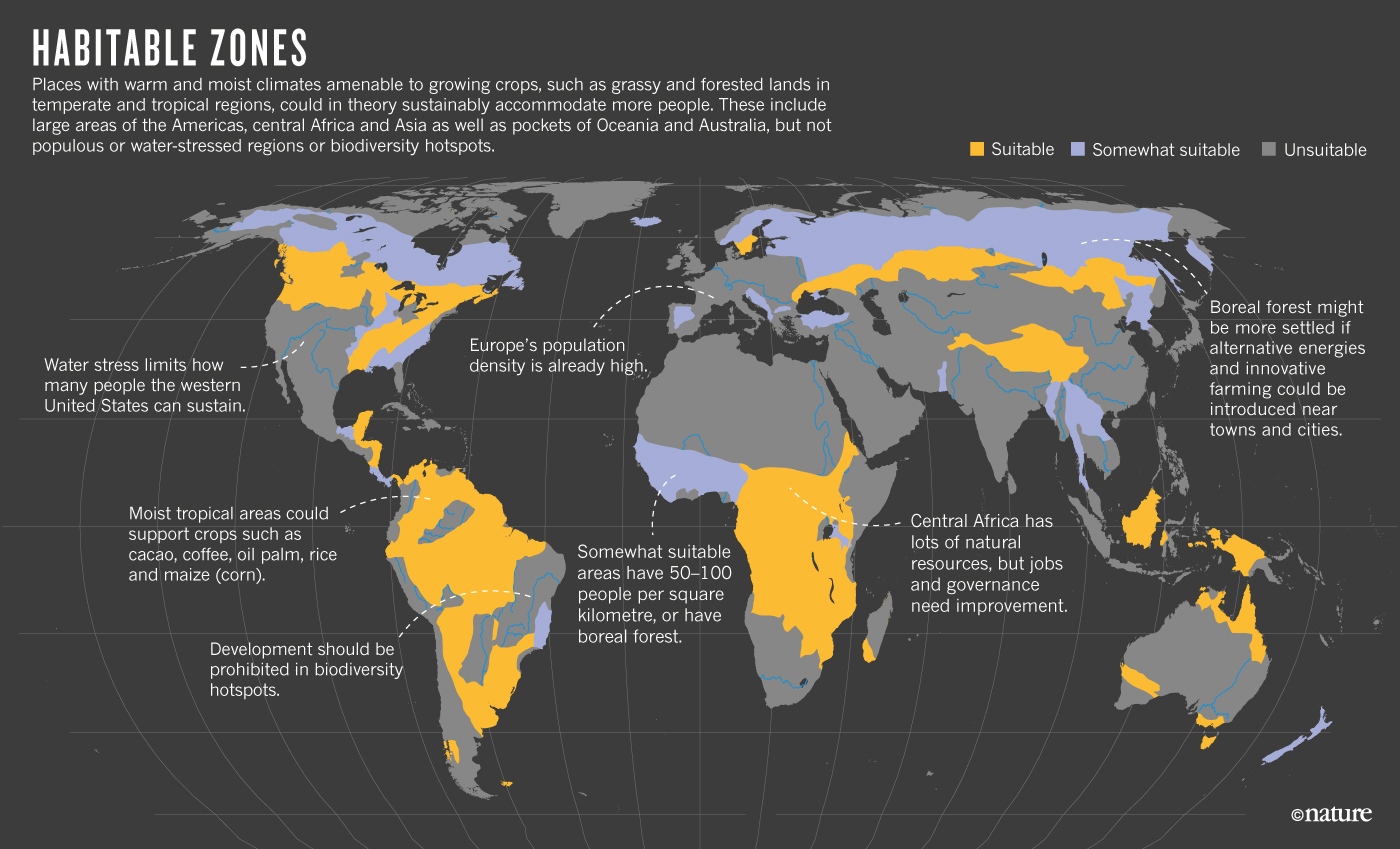 The fact that these amenable places differ from regions where population growth is most rapid raises the issue of whether migration to more suitable areas will increase, especially as the impacts of climate change hit harder. Most people prefer to stay in their own nation. The costs of migration are high: breaking cultural and social ties, transport and rebuilding of communities and infrastructure. But staying put becomes less feasible as a population becomes more dense and environmental resources more limited. As the flight of refugees from today's Middle Eastern conflicts shows, the migration of tens or hundreds of thousands of people will challenge communities along the travel routes as well as in the source and recipient regions, which are mainly urban.

Of course, many more factors affect where people can or want to live, including job availability, quality of government, conflicts and secondary effects of population growth such as air pollution, wastewater, urban heat and loss of natural vegetated land.

And there are alternatives to settling more suitable regions. For instance, we could move everyone into compact cities; pump more water from deeper wells and aquifers; build thousands of desalinization facilities; apply agricultural genetics to accelerate food production; or let climate warming turn boreal forest into farmland. But such ideas will be unsuccessful in the long term without widespread land, water and urban planning.

Cities are so enmeshed in their surrounding regions that it no longer makes sense for them to be the sole focus of sustainable planning4, 8. Satellite images reveal patchworks of communities, industrial zones, farmland and natural ecosystems threaded by a web of transport links. For people and nature to thrive, the arrangement of land systems and water across the urban region (typically 70–100 kilometres in radius) must be managed holistically3. Urban region plans outline areas where water-supply protection, new compact communities, local food production, industrial centres and so forth are and are not appropriate, rather than pinpointing specific streets, developments and industries. They aim to sustain people and resources within the city and surrounding rings3, 8.

Some areas can accommodate more people better than others can. Inner cities and suburbs have too little land. Although city centres can be made more dense, for example by building upwards, they tend to have little green or outdoor space for families and suffer from excess heat, pollution and other environmental problems4. And unplanned growth beyond the city limits can destroy ecologically valuable land.

“Fit built structures around, rather than on, the valuable natural resources.”

We suggest that growth be concentrated in four places: the outer suburbs; existing low-density sprawl areas just beyond the suburbs; satellite cities; and towns and villages within adjoining farmland. These peripheries are ripe for economic investment in jobs, parks, local public transport, water systems and housing3, 8. Compact communities facilitate neighbourhood ties, whereas scattered housing and roads characterize bad sprawl. Local officials and decision-makers will need policies and incentives to encourage sustainable development in these zones, particularly in rural villages, which tend to empty out as residents move to cities for work.

Focusing on the region instead of the city will help to protect natural areas, water supplies, food-growing areas, air quality and natural resources. For example, New York protects land around its reservoirs to prevent water pollution; Sapporo in Japan guards its mountain slopes to provide cooling, erosion control, tourism, recreation and wood; so does Stuttgart in Germany, but for ventilation with clean air. Portland has set a limit for sprawl, and London enforces a greenbelt. Expanses of market gardens adjoin Valencia in Spain, and waste-water food-growing thrives next to Kolkata, India. Chicago has regional clean-air regulations; Edmonton, Canada, sites its industrial areas down-wind.

Yet urban region planning is scarce today. For good reasons — the areas are big and involve numerous jurisdictions, sectors and key societal functions. City planning is commonly done by experts in city centres or by architects focused on buildings. Typically the environment is addressed near the end of a planning process, and mainly to meet regulations.

The process needs to be reversed. Built structures should be fitted around, not on, valuable natural resources.

Global-scale land planning and human migration issues should be linked to international agreements on water stress, clean water and environmental degradation. The source and target areas of human migration should receive particular attention. Such agreements might highlight groundwater quantity and quality in urban regions; riverside or floodplain protection; and development and irrigation in areas needed to protect water supplies for cities. Immigration policies should encourage development and growth in environmentally suitable regions.

National governments must put teeth into policies mandating urban region plans. Funding for planning, implementation and measuring progress should be allocated by the different levels of government and beneficiaries.