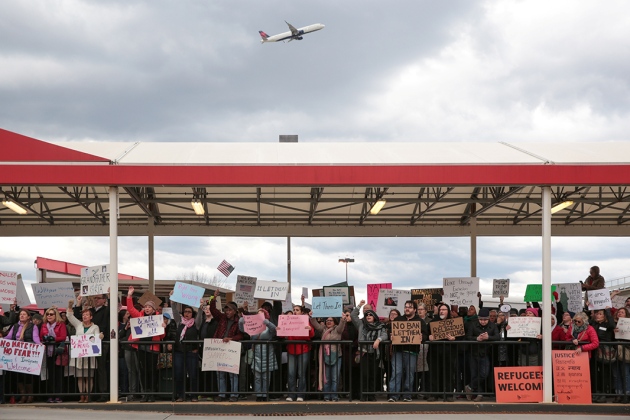 US President Donald Trump has signed a revised version of his controversial travel ban.

The policy, issued on 6 March, exempts citizens of Iraq and people who were issued US visas before 27 January — including those with green cards. Like the first order, which Trump signed on 27 January, the revised policy bars citizens of Iran, Libya, Somalia, Sudan, Syria and Yemen from entering the US for 90 days.

Trump administration officials told reporters today that the ban is intended to protect the United States from terrorism, but it is not clear whether that reasoning will stand up to legal scrutiny. The first travel ban has been blocked indefinitely by federal courts, pending an ongoing lawsuit, and the revised ban seems certain to face similar challenges.

Many scientists affected by the first policy have struggled to understand whether it is safe for them to leave the United States to visit family, attend scientific conferences or conduct research. The revised policy might not offer these people much comfort, says Stefano Bertuzzi, executive director of the American Society for Microbiology in Washington DC. “I think there’s so much uncertainty that even if they could [travel], I don’t think they would,” he says.

There are many scientists whose movements will still be restricted under the new ban, which takes effect on 16 March. Among them are researchers who need to renew their visas, or those who are working or studying in the United States on a single-entry visa, says Brendan Delaney, an immigration lawyer at Leavy, Frank & Delaney in Bethesda, Maryland. Although the 6 March order allows US immigration officials to grant waivers on a case-by-case basis, he adds, it is not clear how this process would work — or how often such exceptions would be allowed.

Those for whom a waiver may be appropriate, the order says, include “landed Canadian immigrants” and people with busines or professional obligations in the United States.

Some scientific societies worry that the ban will be seen as a sign that the United States does not welcome foreigners — even those who are not from the six banned countries. “It’s not a chilling effect — it’s a reality,” says Benjamin Corb, director of public affairs at the American Society for Biochemistry and Molecular Biology in Rockville, Maryland. Already, some international students and scientists have begun to reconsider working or studying in the United States, Nature has reported.

At the same time, the Trump administration has moved to restrict the popular H-1B visa available to highly skilled immigrants, including many scientists. On 3 March, the government moved to suspend “premium processing” for the visas, which allows employers to pay a fee to have a visa application processed in 15 days instead of the usual 3–6 months. The suspension takes effect on 3 April and could last up to six months.