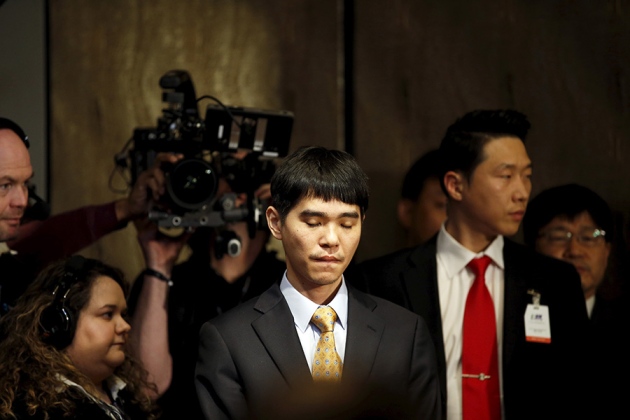 Following the defeat of one of its finest human players, the ancient game of Go has joined the growing list of tasks at which computers perform better than humans. In a 6-day tournament in Seoul, watched by a reported 100 million people around the world, the computer algorithm AlphaGo, created by the Google-owned company DeepMind, beat Go professional Lee Sedol by 4 games to 1. The complexity and intuitive nature of the ancient board game had established Go as one the greatest challenges in artificial intelligence (AI). Now the big question is what the DeepMind team will turn to next.

AlphaGo’s general-purpose approach — which was mainly learned, with a few elements crafted specifically for the game — could be applied to problems that involve pattern recognition, decision-making and planning. But the approach is also limited. “It’s really impressive, but at the same time, there are still a lot of challenges,” says Yoshua Bengio, a computer scientist at the University of Montreal in Canada.

Lee, who had predicted that he would win the Google tournament in a landslide, was shocked by his loss. In October, AlphaGo beat European champion Fan Hui. But the version of the program that won in Seoul is significantly stronger, says Jonathan Schaeffer, a computer scientist at the University of Alberta in Edmonton, Canada, whose Chinook software mastered draughts in 2007: “I expected them to use more computational resources and do a lot more learning, but I still didn’t expect to see this amazing level of performance.”

The improvement was largely down to the fact that the more AlphaGo plays, the better it gets, says Miles Brundage, a social scientist at Arizona State University in Tempe, who studies trends in AI. AlphaGo uses a brain-inspired architecture known as a neural network, in which connections between layers of simulated neurons strengthen on the basis of experience. It learned by first studying 30 million Go positions from human games and then improving by playing itself over and over again, a technique known as reinforcement learning. Then, DeepMind combined AlphaGo’s ability to recognize successful board configurations with a ‘look-ahead search’, in which it explores the consequences of playing promising moves and uses that to decide which one to pick.

Next, DeepMind could tackle more games. Most board games, in which players tend to have access to all information about play, are now solved. But machines still cannot beat humans at multiplayer poker, say, in which each player sees only their own cards. The DeepMind team has expressed an interest in tackling Starcraft, a science-fiction strategy game, and Schaeffer suggests that DeepMind devise a program that can learn to play different types of game from scratch. Such programs already compete annually at the International General Game Playing Competition, which is geared towards creating a more general type of AI. Schaeffer suspects that DeepMind would excel at the contest. “It’s so obvious, that I’m positive they must be looking at it,” he says.

DeepMind’s founder and chief executive Demis Hassabis mentioned the possibility of training a version of AlphaGo using self-play alone, omitting the knowledge from human-expert games, at a conference last month. The firm created a program that learned to play less complex arcade games in this manner in 2015. Without a head start, AlphaGo would probably take much longer to learn, says Bengio — and might never beat the best human. But it’s an important step, he says, because humans learn with such little guidance.

DeepMind, based in London, also plans to venture beyond games. In February the company founded DeepMind Health and launched a collaboration with the UK National Health Service: its algorithms could eventually be applied to clinical data to improve diagnoses or treatment plans. Such applications pose different challenges from games, says Oren Etzioni, chief executive of the non-profit Allen Institute for Artificial Intelligence in Seattle, Washington. “The universal thing about games is that you can collect an arbitrary amount of data,” he says — and that the program is constantly getting feedback on what’s a good or bad move by playing many games. But, in the messy real world, data — on rare diseases, say — might be scarcer, and even with common diseases, labelling the consequences of a decision as ‘good’ or ‘bad’ may not be straightforward.

Hassabis has said that DeepMind’s algorithms could give smartphone personal assistants a deeper understanding of users’ requests. And AI researchers see parallels between human dialogue and games: “Each person is making a play, and we have a sequence of turns, and each of us has an objective,” says Bengio. But they also caution that language and human interaction involve a lot more uncertainty.

A world where everyone has a robot: why 2040 could blow your mind

DeepMind is fuelled by a “very powerful cocktail” of the freedoms usually reserved for academic researchers, and by the vast staff and computing resources that come with being a Google-backed firm, says Joelle Pineau, a computer scientist at McGill University in Montreal. Its achievement with Go has prompted speculation about when an AI will have a versatile, general intelligence. “People’s minds race forward and say, if it can beat a world champion it can do anything,” says Etzioni. But deep reinforcement learning remains applicable only in certain domains, he says: “We are a long, long way from general artificial intelligence.”

DeepMind’s approach is not the only way to push the boundaries of AI. Gary Marcus, a neuroscientist at New York University in New York City, has co-founded a start-up company, Geometric Intelligence, to explore learning techniques that extrapolate from a small number of examples, inspired by how children learn. In its short life, AlphaGo probably played hundreds of millions of games — many more than Lee, who still won one of the five games against AlphaGo. “It’s impressive that a human can use a much smaller quantity of data to pick up a pattern,” says Marcus. “Probably, humans are much faster learners than computers.”