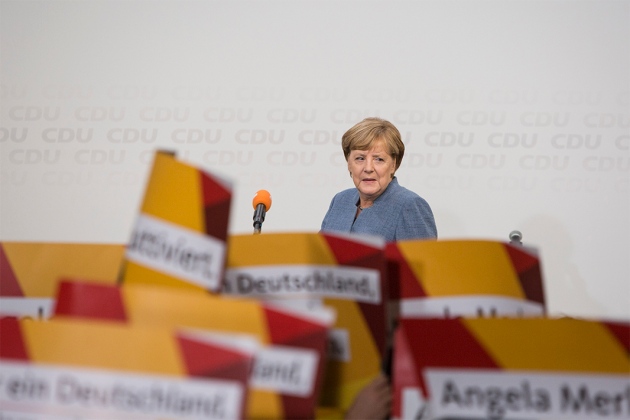 Angela Merkel is set to continue as Germany's chancellor, but is negotiating to form a new governing coalition.

As Germany reels from an unexpected surge for the far right in the 24 September elections, researchers don’t expect much effect on the country’s generous support for science. But with smaller parties standing to gain political influence, battles over issues such as the regulation of gene-edited organisms and how to cut greenhouse-gas emissions could grow fiercer.

Angela Merkel is set for a fourth term as Germany’s chancellor and will lead negotiations with other parties to form a coalition government, after her centre-right Christian Democratic Union (CDU) won the largest share of the seats in parliament, albeit with a diminished lead. Her coalition partner in the last government, the Social Democrats (SPD), came second, but it, too, lost support, and has pledged to move into opposition. Other minor parties are instead expected to enter government, in negotiations that Merkel hopes to complete by the end of the year.

Merkel has ruled out — as being too radical — partnerships with the far-right AfD (Alternative for Germany) party and the socialist Left Party. Most expect her to strike an agreement with the Green Party and the liberal Free Democrats (FDP). That would form a ‘Jamaica coalition’, named as such because the parties’ colours match the green, yellow and black of the Jamaican flag. (A fourth party, the CSU, shares a platform with Merkel's CDU; it campaigns only in Bavaria).

The negotiations are expected to focus on hot political issues, such as Germany’s handling of the refugee crisis. All four parties strongly support science, but there are some key differences. The Greens want the same strict regulation for organisms that have been gene edited with precision technologies such as CRISPR, as has been put in place for those modified with conventional, less precise techniques. But the other three parties have hinted that they may support a more liberal form of regulation.

Overall, Germany already tightly regulates research on genetically modified organisms (GMOs), and animals in general, and is unlikely to tighten that further under a new government, says Tobias Erb, a director at Germany’s Max Planck Institute for Terrestrial Microbiology in Marburg. “But I do expect that it will remain complicated, and might even get more complicated, to release GMOs — and in particular GM plants — if the Greens become part of the next government coalition,” he says.

Germany’s climate and energy policies could be another area of conflict within a future coalition, says Oliver Geden, a policy expert with the German Institute for International and Security Affairs in Berlin.

The Greens want to shut down the country’s dirtiest coal power plants, and support a climate-protection law to help Germany meet its plans to reduce greenhouse-gas emissions by 80–95% from 1990 levels by 2050. But the FDP, a pro-business party in favour of free-market economics, advocates against detailed central planning to force cuts to carbon dioxide emissions — of the sort that has previously been proposed both by the Greens and by the outgoing CDU/SPD coalition. The FDP does favour eliminating “inefficient” subsidies in the energy sector and strengthening the European emissions-trading scheme. “We should expect a lot of ambiguity, even hypocrisy, when it comes to climate policy,” says Geden.

The strong presence of the AfD in parliament will make for noisy debates. Having won 13% of votes, the party is now the third largest after the SPD and CDU/CSU. The AfD did not make election statements on science, and declined to answer Nature’s questions before the election, but party leaders have previously expressed climate scepticism and distrust of genetic engineering.

The AfD’s rise means that for the first time, a party is represented in parliament that opposes Germany’s plans to cut greenhouse-gas emissions by moving to renewable-energy sources — termed the ‘Energiewende’, or energy transition. But its sceptical stance on climate and energy issues is unlikely to sway the next government, Geden says.