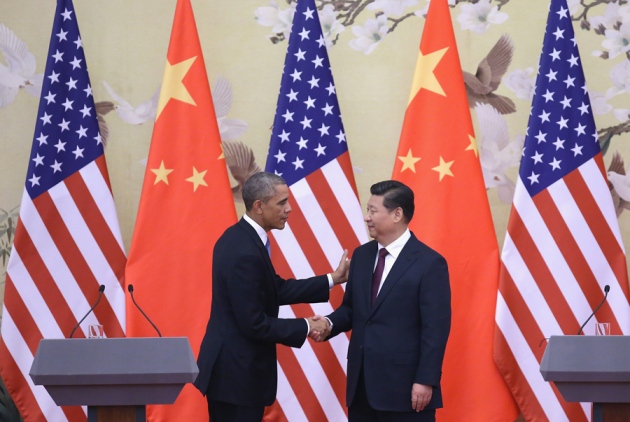 China and the United States announced plans on 12 November to substantially reduce their greenhouse-gas emissions, in what might signify a historic breakthrough in international efforts to limit climate change.

Speaking at the Asia-Pacific Economic Cooperation summit in Beijing, US President Barack Obama pledged to cut total US greenhouse-gas emissions by 26–28% below 2005 levels by 2025. At the same time, President Xi Jinping said that China will stop its emissions from growing by 2030 at the latest. This is the first ever such commitment by China, the world’s biggest polluter, to an upper bound on its soaring greenhouse-gas emissions.

“We agreed to make sure that international climate-change negotiations will reach an agreement as scheduled at the Paris conference in 2015,” Xi told a press conference in Beijing.

Obama called the agreement a major milestone in the US–China relationship. “By making this announcement today, together, we hope to encourage all major economies to be ambitious — all countries, developing and developed — to work across some of the old divides so we can conclude a strong global climate agreement next year,” he said.

Nature explains the nuances of the two countries' pledges.

How surprising is the timing of this announcement?

It comes unexpectedly early. Parties to the United Nations Framework Convention on Climate Change face a March 2015 deadline to submit their greenhouse-gas reduction pledges to a planned global climate agreement that is to take effect in 2020.

The details of that agreement — a successor to the 1997 Kyoto Protocol — are to be finalized in December 2015 at UN climate talks in Paris. Most policy analysts would have expected China and the United States to reveal their targets closer to the March 2015 deadline.

How ambitious are the plans?

To achieve its goal, the United States will need to double the pace of its emissions cuts. It had pledged to a decrease of 1.2% per year during the 2005–20 period; it has now committed to further cuts of 2.3–2.8% per year between 2020 and 2025. "This is an ambitious goal, but it is an achievable goal," Obama said.

China’s pledge to stop its emissions growth by 2030 is a politically significant expression of goodwill. But the plan is somewhat ambiguous: China has not set a level at which its emissions will peak, nor has it said whether emissions will plateau after 2030 or actually decline — and if so, at what rate.

How do the United States and China plan to achieve these emissions targets?

In the United States, Obama's existing proposals to reduce greenhouse-gas emissions from existing power plants and enact new standards for vehicle fuel-efficiency and energy efficiency are expected to help the country to meet its climate commitment. Carbon capture and storage could also play a part, but that technology is still in development.

Will they be able to pull it off?

Some experts doubt that the United States will fulfil its ambitions. Congress, which will come under Republican control in 2015, is unlikely to approve any new legislation in the next few years to reduce US greenhouse-gas emissions.

Obama can circumvent this to some degree, by using an executive order to enact changes in US climate policy. He chose this path to propose new regulations for greenhouse-gas emissions from existing power plants, for example. But such action can be, and often is, challenged in court.

It also remains to be seen whether the next US president will choose to continue Obama's environment-friendly course. Obama will finish his second, and last, term in office in January 2017.

By contrast, China's less-ambitious plans might be much easier to achieve, not least because of that country's political structure, which allows more centralized, top-down decision-making.

How do the targets compare with the European Union’s climate goals?

Not as unfavourably as it might appear. EU leaders agreed last month on a set of climate and energy policies that require the bloc’s 28 member states to cut their collective emissions by at least 40% by 2030, relative to 1990 levels. But that target is less ambitious than it sounds. The bulk of the cuts have already been achieved, partly thanks to the sharp economic downturn in the 1990s in former communist countries.

Brussels has kept open the possibility of adopting more-ambitious targets in response to strong action by China and the United States.

The US–China announcement seems certain to trigger a debate as to whether the European Union should respond with stricter climate goals. But the chances of Brussels actually doing so seem slim: EU member states that oppose such regulation — such as Poland, which depends heavily on coal — have a de facto right to a veto.

What about other large emitters?

Governments can no longer point to China and the United States to justify their own inaction. Political pressure will increase on large polluters to adopt domestic emissions regulations and contribute in a meaningful way to a future international agreement.

Among emerging economies, Mexico is pushing most vigorously towards reducing emissions. But the focus will be on India, which has so far been reluctant to engage in the climate-policy debate. How Russia might position itself amid rising East–West tensions is still anyone’s guess.

What are the experts saying?

“Given that the announcement includes an ambitious new quantitative target for emissions reductions from the United States, plus a commitment for the first time of emissions peaking in China by a specific year, this agreement is potentially one of the most important developments in international climate negotiations in more than a decade,” says Robert Stavins, who leads the Project on Climate Agreements at Harvard University in Cambridge, Massachusetts. “For China and the United States to jointly announce quantitative targets means that the likelihood of success in Paris is greatly enhanced.”

"By announcing to stop its CO2 emissions from growing by 2030 or earlier, China is turning the steering wheel of that huge vessel which is international climate policy,” says Hans Joachim Schellnhuber, director of the Potsdam Institute for Climate Impact Research in Germany. “But for its emissions to peak at a tolerably low level, China will urgently need to reduce the use of coal for electricity generation. This could have a welcome domino effect on other coal-based economies, such as Australia’s and Germany’s.”