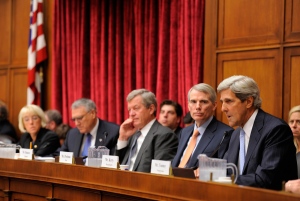 US Senator John Kerry of Massachusetts speaking at a meeting of the Joint Select Committee on Deficit Reduction in September.

The failure, however unsurprising, of the US Joint Select Committee on Deficit Reduction to accomplish its goals has set up a troubling scenario for federally funded research. Across-the-board cuts to all discretionary federal spending, beginning in 2013, are becoming increasingly probable. Such cuts would affect all of the major US research agencies, which last year received some US$60 billion in funding. With many details still to emerge, Nature considers the implications of the committee’s impasse.

What is the committee and what was their goal?

The bi-partisan 'super-committee', made up of 12 US congressional representatives, was engendered by the 2011 Budget Control Act and tasked with finding ways to reduce the nation's deficit by at least $1.2 trillion over the next ten years. The committee was required to issue a formal deficit-reduction recommendation by 23 November, but did not reach an agreement.

Under the provisions of the Budget Control Act, the failure to reach an agreement will trigger a round of automatic ‘sequestration cuts’, which will be applied to all federal departments and agencies beginning on 2 January 2013 and total some $1.2 trillion by 2021. (Because of the lag time between appropriations and expenditures, among other reasons, the Congressional Budget Office has estimated that the actual net savings to the US government would be around $1.1 trillion.)

How will the cuts be distributed?

The law requires that the cuts be divided equally between defence and non-defence programmes. The non-defence cuts will be spread across the discretionary programmes, which include most science and technology agencies. Each programme will be cut by approximately 8%.

How will the different science agencies be affected?

The final outcome of this week's impasse is unclear, and more detailed budgets are unlikely to be available for another several months. However, some assessments predict damaging effects on the research community. According to a 14 October letter from the Democratic House Committee on Appropriations, sequestration would lead to 2,500–2,700 fewer grants from the National Institutes of Health (NIH) and 1,500 fewer from the National Science Foundation (NSF). The NSF cuts mean that the foundation will fund some 18,000 fewer students and staff than it did in 2011.

The allowed flexibility in applying the cuts will probably vary from agency to agency, depending in part on the committees who write the instructions for making the cuts, the constituents who elected the committee members, and the political climate.

Who is most vulnerable?

Scientists early in their careers may feel the cuts more strongly than established researchers. Acceptance rates for new grants will likely go down, as existing grants are much more difficult to excise. Some 80% of the NIH budget, for example, is tied up in four-year grants. The cash that remains supplies new grants, suggesting that fewer new research ideas will be funded than in previous years.

Can the cuts be avoided?

Congress could pass a bill to change how sequestration will unfold, but President Barack Obama has said that he will veto any legislation that seeks to dodge the automatic cuts to domestic or defence spending. This is certain to raise the political pressure on legislators as the 2012 election year unfolds. But there is time for Congress to alter the across-the-board nature of the cuts, and advocates for federally supported science are likely to shift into high gear to try to aim the budget scythe away from research.