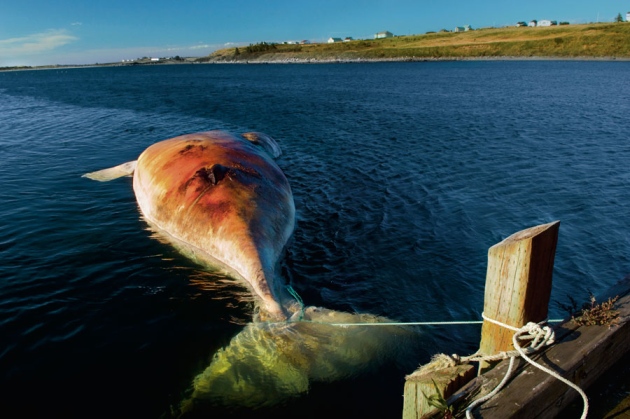 Collisions with ships can be deadly for right whales.

Human activity is still killing right whales, one of the most endangered animals in the ocean. An analysis of four decades of whale deaths shows that attempts to prevent them have not had a demonstrable impact.

Only around 460 North Atlantic right whales (Eubalaena glacialis) are thought to be swimming the waters off the eastern seaboard of Canada and the United States. The governments of both countries have implemented several measures to protect whales from becoming entangled in fishing gear or being hit by ships, such as the US ‘ship strike rule’ that limits vessel speeds in certain areas. That rule came into force in 2008 and is due to expire next year.

Marine-mammal researchers Julie van der Hoop and Michael Moore, both at the Woods Hole Oceanographic Institution in Woods Hole, Massachusetts, and their colleagues, analysed all known deaths of eight species of large whale in the northwest Atlantic between 1970 and 2009. During that time 122 right whales died, along with 473 humpbacks (Megaptera novaeangliae), 257 fin whales (Balaenoptera physalus) and scores of whales of other species. When the authors were able to assign a cause of death, ‘human interactions’ was the most common, appearing in 67% of cases. Entanglement in fishing gear was the main cause of death in this category.

The protection measures seem to have had no impact on whale deaths, according to the study published online in Conservation Biology1. Although several of the rules were implemented only towards the end of the study period, Moore still admits that the finding is “hugely disappointing”.

But Moore also notes that the study was a very “broad brush” analysis. There are specific local efforts — such as moving shipping lanes in the Bay of Fundy between the Canadian provinces of New Brunswick and Nova Scotia — that “undoubtedly” helped the conservation of right whales, but which would not show up in a wider view.

The analysis also points out where future protection efforts could be focused. Van der Hoop notes that their estimates of where vessel strikes occur show a large spike in the waters around Cape Hatteras, just north of Morehead City in North Carolina. Almost no measures have been implemented in this region to reduce whale deaths, so a focus on preventing vessel strikes here could be hugely valuable.

Greg Silber, a marine-mammal researcher at the US National Marine Fisheries Service, headquartered in Silver Spring, Maryland, says that this latest work “helps to reinforce the need for thoughtful, science-based and well-balanced approaches to reducing human-caused mortality of large whales”.

Silber and his colleague Shannon Bettridge, also from the fisheries service, concluded in a report earlier this year2 that it was too soon to tell whether the ship strike rule was effective. Compliance with the rule was poor after it was implemented, Silber notes, but it has improved more recently. Their report called for speed restrictions to be continued, and suggested that these could be extended to include smaller ships.

Moore has also seen tentative signs that things have improved since 2009. His team has funding from the US government to perform autopsies on right whales. “I’ve had a hard time spending the money in the past few years,” he says, “and that’s a really positive sign.”