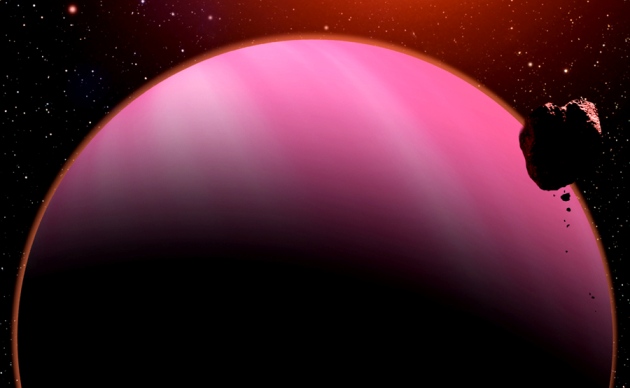 An artist's conception of exoplanet HAT-P-11b orbiting its star 122 light years from Earth.

The smallest exoplanet yet found to contain water is about the size of Neptune — and a rare glimpse at its atmosphere reveals clear conditions. The handful of other small planets whose atmospheres have been studied all have cloudy skies.

“It’s the smallest planet that we’ve seen anything in the atmosphere besides clouds,” says Jonathan Fraine, an astronomer at the University of Maryland in College Park. “The fact that it’s clear at all is significant.”

Fraine and his colleagues describe the atmosphere of the planet in the 25 September issue of Nature1. Known as HAT-P-11b, the body is about 38 parsecs (124 light years) away, in the Cygnus constellation.

Astronomers have been piecing together details on the atmospheres of several alien worlds, trying to find an Earth-like world with an Earth-like atmosphere. So far, however, clouds have generally obscured their view.

HAT-P-11b is different. Fraine’s team used the Hubble and Spitzer space telescopes to monitor the dimming of its star’s light as the planet passed in front of it, along with spectral details of the light during those transits. The astronomers could briefly glimpse its atmosphere twice, as the planet moved onto the disk of the star and then off it..

After observing how hydrogen and oxygen absorbed particular wavelengths of starlight, the scientists concluded that there was water vapour high in the planet’s atmosphere. To their surprise, the strength of the signal suggested that the atmosphere is free of clouds, at least as deep as Hubble can see.

Finding clear skies on HAT-P-11b took Fraine and his colleagues by surprise: “We got lucky with this one,” he says.

There could still be clouds closer to the planet’s surface, he adds. If pilots could fly through the atmosphere of HAT-P-11b, they might see low-lying puffy clouds below them but clear skies above.

It is no surprise to find water in the atmosphere. But the unobstructed view also allows astronomers to deduce how much rock and ice is in the planet’s interior, says Kevin Stevenson, an exoplanet astronomer at the University of Chicago in Illinois. The location of the water rules out several possible explanations for what is inside HAT-P-11b. It points astronomers towards a model in which the planet started out with a rocky or icy core, then accumulated hydrogen gas over time.

HAT-P-11b is about four times the size of Earth but has 26 times its mass. Team member Björn Benneke, of the California Institute of Technology in Pasadena, will soon be using the Hubble telescope to probe the atmospheres of other small exoplanets. The hope is that at least some of them will also be clear.