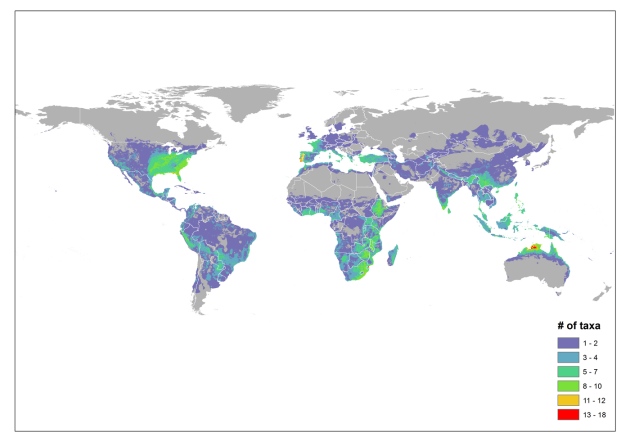 In an effort to breed better crops, a global survey has identified geographical regions where the wild relatives of 29 crops are in greatest need of collection if their genetic diversity is to be conserved — with notable hotspots in northern Australia and Portugal.

Faced with climate change, plant breeders are increasingly turning to the genomes of the wild, weedy relatives of crops for traits such as drought tolerance and disease resistance. But a global analysis of 455 crop wild relatives has found that 54% are underrepresented in gene bank collections — and that many, including ones at risk of extinction, have never been collected.

The findings, released on 22 July by the International Center for Tropical Agriculture (CIAT) in Cali, Colombia, will guide the largest international initiative so far to conserve crop wild relatives. The effort — which is being spearheaded by the Global Crop Diversity Trust, based in Bonn, Germany, in partnership with the Millennium Seed Bank at the Royal Botanic Gardens in Kew, UK — is deemed urgent at a time when one in five plants faces extinction.

Plant breeders are keenly interested in securing the genetic diversity needed to breed new varieties that will withstand the droughts and elevated temperatures expected in the future as a result of climate change. Crop wild relatives are one of the most valuable genetic resources to improve crops, but they are threatened because of habitat loss as well as gene flow from domesticated plants through cross-pollination, says Paul Gepts, a plant breeder at the University of California, Davis.

The analysis identified crop species — including potato, apple, aubergine, carrot and sunflower — that have high numbers of relatives yet to be collected. And it identified some crops, such as sorghum and bananas, that have few, if any, relatives secured in collections.

Many of the countries that are home to the most under-collected crop wild relatives — including Cyprus, Turkey, Bolivia and India — are located in regions where agriculture first originated. But two notable exceptions are northern Australia and the eastern United States, which also house many species that are still in need of collection.

The analysis and weed maps by the CIAT “will help us prioritize species of interest and use the scarce resources available to find important new sources of diversity”, says Susan McCouch, a rice geneticist at Cornell University in Ithaca, New York.

To prioritize species for conservation, researchers at the CIAT first identified all known wild relatives of 29 globally important crops. The team then spent two years scouring gene banks, herbaria and museums to document what is currently housed in collections and to gather other data, such as recorded sightings in the wild. From the data, the team identified species that are a high priority for collection and where conservationists should target those efforts.

“It’s by far the largest, most comprehensive information database on the distribution of wild relatives around the world,” says Colin Khoury of Wageningen University in the Netherlands, who co-led the research. The team plans to analyse the wild relatives of a further 60 crop species — incorporating essentially all the major crops — by the end of the year.

The Global Crop Diversity Trust will use the resulting maps — which illustrate where wild relatives of these 29 crops are in greatest need of collecting — to create partnerships with conservation organizations in countries such as Portugal and Italy, as well as in conflict-ridden regions such as Pakistan and Sudan.

Ehsan Dulloo, head of conservation at Bioversity International, an agricultural-research organization in Rome, says that securing samples for placement in gene banks is important to protect species from destruction by natural calamities or war, for example.

Khoury notes, for instance, that wild relatives of the faba bean, found only in war-torn Syria, are of conservation concern, and that habitat destruction threatens wild maize (corn) in Mexico. Dulloo adds that complementary efforts to conserve the plants within their native habitats should also be pursued to allow crop wild relatives to continue evolving, thereby protecting the potential for the emergence of even more genetic diversity.

One hurdle, Dulloo says, is bridging the divide that exists between environmental and agricultural interests. “The problem is that the conservation of crop wild relatives in the wild is under the jurisdiction of the environmental people, but is of much more interest to the agricultural people — yet the two sectors seldom talk to each other,” he says. He is leading a two-year Bioversity initiative to bring the interests together so that they can identify weed conservation strategies in partnership.