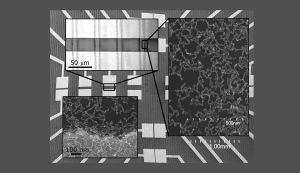 Think of it as a medical monitor for the cell. Researchers have developed a microscopic device that can detect the ebb and flow of electrons within an alga as it photosynthesizes. The device is known as a single-electron transistor, and its inventors hope that it could be used to measure the performance of biofuel-producing organisms, or to test the effects of drugs on individual cells.

A transistor acts like a switch in an electrical circuit: a voltage at the transistor’s ‘gate’ terminal allows current to flow through a semiconductor inside the device. If the semiconductor is small enough — a nanoparticle, for example — a single electron can switch the transistor on, amplifying a tiny signal into a much larger current in the main circuit.

The first single-electron transistors were built in the late 1980s1, but most require very low temperatures — otherwise, the electrons gather enough energy to ‘tunnel’ through the semiconductor, and current leaks through the switch. A handful work at room temperature (by using carbon nanotubes to detect electrons, for example2), but they cannot operate in water — a serious obstacle to using such devices in living organisms.

In 2008, materials scientist Ravi Saraf at the University of Nebraska–Lincoln and his colleagues built a room-temperature single-electron transistor using a different approach3. They strung together thousands of gold nanoparticles, each 10 nanometres across, into long ‘necklaces’. These can form a tangled network that connects two electrodes some 30 micrometres apart.

Roughly 5% of the gold nanoparticles have defects that prevent current from flowing from one electrode to the other. But if an electron settles on a defective nanoparticle, it makes it slightly easier for current to flow, and the transistor switches on. “Saraf takes advantage of the fact that these one-dimensional arrays are not perfect,” says Ulrich Simon, a nanoscience researcher at the RWTH Aachen University in Germany.

Now, Saraf’s team has shown that the nano-necklace device works in water and can monitor a cell’s vital signs. “That’s something really new,” says Simon. The cells sit on the surface of the gold nano particles, where subtle changes in the charge distribution across the cell membrane can bridge the defects and switch the transistor on. Their results are due to appear in Advanced Materials.

The device can fit about five green algae cells between the electrodes. Shining a light on the cells triggers a cascade of biochemical reactions that transfer electrons along a chain of molecules — and switches the transistor on. Adding more carbon dioxide, or using wavelengths of light that are easily absorbed by chlorophyll, increases the rate of photosynthesis and produces a larger current through the transistor.

Other researchers are trying to repurpose the biochemistry of green algae to make biofuels, and Saraf thinks that his device could monitor how efficiently the new strains photosynthesize. He also hopes to test the effects of candidate drugs on the metabolism of human cells, by monitoring pH changes, for example. “Now that we can do this in water, we want to try mammalian cells,” Saraf says.