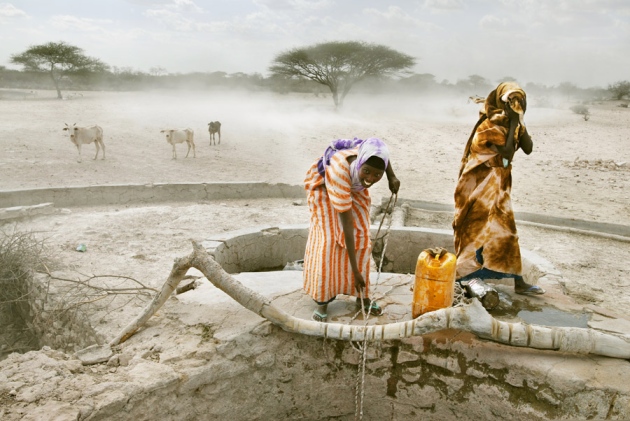 Water scarcity in parts of Africa could become worse, according to a complementary set of climate projections.

When pondering the best way to study the impact of climate change, researcher Hans Joachim Schellnhuber liked to recall an old Hindu fable. Six men, all blind but thirsty for know­ledge, examine an elephant. One fumbles the pachyderm’s sturdy side, while others grasp at its tusk, trunk, knee, ear or tail. In the end, all are completely misled as to the nature of the beast.

The analogy worked. Although many researchers had modelled various aspects of the global-warming elephant, there had been no comprehensive assessment of what warming will really mean for human societies and vital natural resources. But that changed last year when Schellnhuber, director of the Potsdam Institute for Climate Impact Research in Germany, and other leading climate-impact researchers launched the Inter-Sectoral Impact Model Intercomparison Project. This aims to produce a set of harmonized global-impact reports based on the same set of climate data, which will for the first time allow models to be directly compared. Last month it published its initial results in four reports in Proceedings of the National Academy of Sciences1–4. These suggest that even modest climate change might drastically affect the living conditions of billions of people, whether through water scarcity, crop shortages or extremes of weather.

The group warns that water is the biggest worry. If the world warms by just 2 °C above the present level, which now seems all but unavoidable by 2100, up to one-fifth of the global population could suffer severe shortages.

“Water and all that relies on it, from food to sanitation and public health, is an emblematic aspect of climate change whose urgency people tend to instantly understand,” says Schellnhuber.

To assess what a warmer world might mean for the human race, 30 groups from 12 countries have run thousands of simulations, using a standardized set of scenarios for greenhouse-gas emissions. They made projections of future water availability from a set of global hydrological models in conjunction with five state-of-the-art climate models1 that combined projections of changes in temperature and precipitation with data on variables such as regional water cycles, river run-off and population.

The multi-model assessment suggests that, in vulnerable regions, climate change will significantly add to the problem of water scarcity that is already arising from population growth. The modellers found that climate-driven changes in evaporation, precipitation and run-off will result in a 40% increase in the number of people worldwide who must make do with less than 500 cubic metres of water per year — a commonly used threshold to signify ‘absolute’ water scarcity.

The spread between individual models was large — some suggested that global exposure to water scarcity will double; others predicted only modest change. But no matter what the spread, the greatest effects were seen between the present-day climate and a 2 °C warmer world.

Despite the ambiguities, the exercise will make climate-risk analysis substantially more robust, says Johan Rockström, an expert on water resources at the University of Stockholm and director of the Stockholm Resilience Centre, who was not involved in the project.

“Impact models will never be able to provide the level of detail that ultimately matters for making a city or coastline climate-proof,” he says. “But they do serve as a first approximation to the severe problems deficient regions and nations are facing.”

Regions most at risk from water scarcity include parts of the southern United States, the Mediterranean and the Middle East. By contrast, India, tropical Africa and high latitudes in the Northern Hemi­sphere can expect to receive more water in a warming world.

“We are facing problems that result in domestic instability and migration.”

The projected changes in water availability have knock-on effects in other areas that rely on water. The group that modelled the response of crops to climate change found negative impacts on yields of major crops in many agricultural regions2.

In addition, drought conditions are likely to become more frequent and severe in some parts of South America, western and central Europe, central Africa and Australia, another project team reports3. Flood risk is less clear-cut, but river-flow simulations from global hydrology and land-surface models did show an increase in flood hazard in more than half of the world4.

Despite their uncertainty, the findings are “a stark reminder” that even moderate warming has the potential to cause severe natural, social and economic disruptions, says Rockström. “We are facing problems that result in domestic instability and migration.” Rethinking international trade with a view to giving the most needy nations better access to the global food market will be essential, he says.

Uncertainty, adds Schellnhuber, is no excuse for inaction. “Those who might say, ‘Come back when you’ve narrowed down the risk’ should be reminded that climate change is a treacherous gamble,” he says. “We don’t quite know the odds, but the chance of losing heavily might be a lot bigger than many tend to think.”