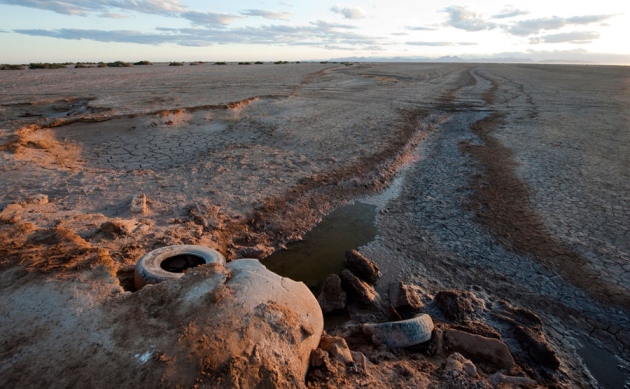 Water diversions in two countries mean that the mighty Colorado River peters out before it reaches Mexico’s Gulf of California.

One of North America’s most iconic rivers is about to undergo an unprecedented experiment in ecological engineering.

On 23 March, operators at the Morelos Dam along the US–Mexico border near Yuma, Arizona, will open the gates and begin releasing water downstream. The goal is to dampen broad swathes of the arid Colorado River delta for the first time in decades, allowing new cottonwood and willow trees to germinate and restore small patches of riparian habitat.

The move, which follows bitter international battles over water rights, will mark the first time that the United States and Mexico have put water back into the parched riverbed for environmental purposes. It is both a practical and a symbolic victory for conservationists who have fought to restore what was once 800,000 hectares of lush wetlands, as well as a rare opportunity for ecologists worldwide to watch what happens.

The mighty Colorado rises on the western slope of the Rocky Mountains and drains seven US and two Mexican states along its 2,300-kilo­metre course (see ‘River run’). Before the 1930s, when dams began to throttle the river, its water ran unfettered into the Gulf of California. But most was soon diverted to slake the thirst and agricultural fields of millions of people in the American Southwest. A 1944 international treaty granted Mexico just 10% of the river’s original flow; vast delta wetlands shrivelled to patches of vegetation clinging to sandy plains. 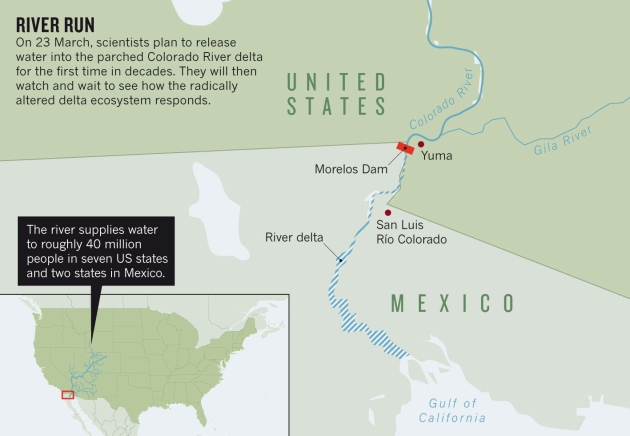 In 2012, officials drew up an addendum to the original water treaty. Known as Minute 319, the agreement lays out how the United States and Mexico will share water surpluses and shortages until the end of 2017. But it also mandates the experimental release of what it calls “water for the environment”.

That was the call to action for a group of researchers from universities, government agencies and non-governmental organizations who had been working for years on delta conservation (E. P. Glenn, K. W. Flessa and J. Pitt Ecol. Eng. 59, 1–6; 2013). They calculated how much water should be released, and over what period of time. As a result of their recommendations, over nearly eight weeks, dam operators will allow some 130 million cubic metres of water to travel downstream.

That is less than 1% of the river’s average annual flow, but it is still significant, says Francisco Zamora Arroyo, director of the Colorado River Delta Legacy Program at the Sonoran Institute in Tucson, Arizona. “It’s going to allow us to learn from this event and better determine the water needs for the delta in the future,” he says.

Most of the flow will come in a three-day pulse, from 27 to 29 March, which is meant to mimic a small-scale spring flood (K. W. Flessa et al. Eos 94, 485–486; 2013). “It’s structured so that we hopefully get a big pulse crossing over into places that have a lot of restoration potential,” says team co-leader Karl Flessa, a geoscientist at the University of Arizona in Tucson. “And we hope that the groundwater doesn’t recede too quickly after that.”

In the days and weeks after the water pulse, monitoring teams will descend on the delta, because no one is entirely sure how long the water will last or what its exact course will be. Hydrologists will gather data on changes in surface water and groundwater; ecologists will count saplings and determine whether that new habitat is attracting birds.

The experiment could benefit the almost 400 bird species that live in the delta, says Osvel Hinojosa Huerta, an ecologist with Pronatura Noroeste, a conservation group with offices in San Luis Río Colorado, Mexico. Every year, about 400,000 migratory waterbirds also pass through the region, an important stop on their flyway along the Americas.

In recent decades, invasive saltcedar trees have crowded out much of the native habitat. The water pulse is designed to create broad expanses of moist sand in which native cotton­woods and willows can germinate, says Patrick Shafroth, a plant ecologist with the US Geological Survey in Fort Collins, Colorado.

The challenge will be to keep those newborn trees alive. Shafroth helped to lead related experiments on a Colorado River tributary, the Bill Williams River in Arizona, in 2005 and 2006. He says that timing is critical for getting seeds distributed to sites where they can take root and grow quickly enough to survive. Thanks in part to such lessons, the delta pulse flow is designed to try to keep the water table from dropping by more than 2.5 centimetres per day, the rate at which cottonwood roots can keep up.

In addition to the eight-week pulse flow, dam operators will also release a ‘base flow’ of 65 million cubic metres, on a schedule that is yet to be determined. The idea is to try to nourish and maintain any new growth that appears this spring.

Team leaders acknowledge that plenty of things could go wrong. Water might vanish into unexpected places, seeping deep underground where it does little good. Trees might not germinate if their seeds do not spread properly. And many saplings could perish if the summer is particularly brutal. But a successful experiment could build support for future releases to the delta, although only one is provided for by the Minute 319 agreement.

Whatever happens during the experiment will almost certainly come as a surprise, says John Schmidt, an ecologist at Utah State University in Logan, who also heads the US Geological Survey’s Grand Canyon Monitoring and Research Center in Flagstaff, Arizona. In 1996, Schmidt helped to lead some larger engineered floods much higher up the Colorado. The goal was to restore sandbars and beaches in areas such as Grand Canyon National Park, but early attempts failed because the newborn beaches quickly eroded (see Nature 420, 356–358; 2002).

“We don’t really know what’s going to happen,” says Flessa. “If we did, we wouldn’t be doing the experiment.”