Some people say they never forget a face, and they aren't alone — the golden paper wasp can also recognize the faces of other members of its species. In humans, this cognitive feat is thought to rely on specialized brain areas evolved specifically for the task, and work published today in Science1 suggests that the same may be true for these wasps.

“Fifteen years ago, if people had claimed [face recognition] existed in insects, others would have thought they were mad,” says Lars Chittka, a behavioural and sensory ecologist at Queen Mary University of London who was not involved in the study. But in 2002, Elizabeth Tibbetts, then a graduate student at Cornell University in Ithaca, New York, demonstrated that the golden paper wasp, Polistes fuscatus, can recognize individuals of the same species from their facial markings2. 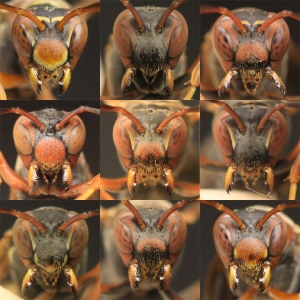 Look carefully, do you recognize the wasp that stung you?

However, scientists have long debated whether mental abilities such as face recognition are evolutionary adaptations or simply skills learned over an organism’s lifetime. So Michael Sheehan, a graduate student in Tibbetts' lab at the University of Michigan in Ann Arbor, explored this question by comparing two species of wasp.

The faces of P. fuscatus have clearly variable features, and the organism’s social structure depends on individuals being able to tell one another apart. Often several queens form a nest together, and then establish a strict social hierarchy; individuals must be able to recognize each others’ status to avoid fights. Sheehan and Tibbetts compared this wasp’s face-recognition abilities with those of a closely related species, Polistes metricus. P. metricus wasps have much less recognizable facial markings and live a less socially complex lifestyle, with just one queen ruling a nest of underlings and no need to differentiate between one another.

The researchers first used pairs of images to train wild-caught P. fuscatus to find their way to a safe zone in an electrified maze. The wasps quickly learned to discriminate between images showing faces of either species, but fared considerably less well when the maze markers showed caterpillars — which the wasps prey on — or simple black-and-white patterns. P. fuscatus were also slow to learn the difference between faces that lacked antennae, or whose facial features had been rearranged. Notably, P. metricus showed the reverse profile — wasps of this species were better at discriminating between the other images than the faces.

The findings suggest that, in P. fuscatus, “there must have been some tweaking of pattern-recognition circuitry specifically for the purpose of recognizing conspecific faces, because they are particularly good at that”, says Chittka.

“What’s cool about this is that these insects show the same type of specialization that’s found in vertebrates,” says Sheehan, which could mean that there are “many more cases of animals which have evolved specialized learning abilities” waiting to be found.

But although the researchers “make a very compelling case” for such a specialized system in P. fuscatus, says Nancy Kanwisher, a cognitive neuroscientist at the Massachusetts Institute of Technology in Cambridge, “their data don’t yet nail” whether this ability evolved or is learned by individuals over the course of their lifetime. Sheehan agrees that both individual learning and evolutionary adaptation might be at play and says the group is now trying to tease out this distinction.

If evolutionary adaptation is involved, it would be interesting to learn how animals with such small brains can accomplish such a complex task, says Chittka. “Does it require major reorganization of the brain, or could it be perhaps that fairly minor changes are necessary to evolve such a novel skill?”