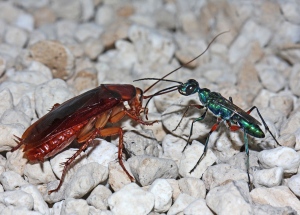 For a roach lover, this wasp (right) is a hygiene freak: its larva disinfects the innards of the host while it devours it from within.

When you're devouring a cockroach from the inside out, hygiene is a must. Anything living inside a roach — especially inside one that has fed on garbage or corpses — must contend with a slew of disease-causing microbes. Now, German scientists have shown that the larva of the emerald cockroach wasp actively disinfects its roach host by exuding a cocktail of antibacterial chemicals from its mouthparts.

The life of an emerald cockroach wasp (Ampulex compressa) begins on an American cockroach (Periplaneta americana) that the mother wasp has stung, dragged back to her burrow and stuck one of her eggs to. Upon hatching, the wasp larva burrows into the immobilized roach and feasts on its innards, eventually killing it. “The cockroach is both the larva’s only food source and its cradle,” says Gudrun Herzner of the University of Regensburg in Germany, a member of the research team.

Cockroach being disinfected by a wasp larva

Herzner watched the larvae by installing transparent panels into the sides of parasitized roaches, literally providing a window on the parasite’s behaviour (see video). She saw that the larvae regularly slathered large amounts of a clear liquid onto their hosts' tissues. “They virtually soak their cockroaches with chemical compounds,” Herzner says.

The team analysed the liquid and found mellein and micromolide, two substances that can slow the growth of certain microorganisms. Targets include virulent bacteria such as Serratia marcescens, the species that Herzner found most commonly in the cockroach tissues. Left unchecked, S. marcescens can rapidly kill insect larvae, but the wasp larva defends itself through its antibacterial secretions. The work appears online today in the Proceedings of the National Academy of Sciences1.

“This study breaks new ground by directly observing the larva’s behaviour,” says David Hughes, an entomologist from Pennsylvania State University in University Park. “The diversity of parasitoid wasps is enormous, with more than 80,000 species, but we know essentially nothing about the behaviour of the larvae, which account for most of the wasps’ lives.”

He adds, “The word parasite comes from ‘parasitos’, the Greek for people who eat at another's table. This parasite does that, but wipes the table down first.”

There are a few similar examples known. The larva of another parasitioid wasp, Pimpla turionellae, secretes antibacterial chemicals from its anus while inside its moth host2. And some parents prepare their offspring’s food for them. In an earlier study, Herzner showed that another parasitic wasp called the European beewolf (Philanthus triangulum) preserves honeybees for its larvae by embalming them with an oily secretion, which stops water from condensing and fungi from growing3.

Herzner suspects that such behaviours are common among parasitic insects. “Every species that uses potentially contaminated food sources, or that stores nutrient-rich provisions for prolonged periods of time, is expected to have some kind of strategy to prevent food-borne illnesses,” she says.