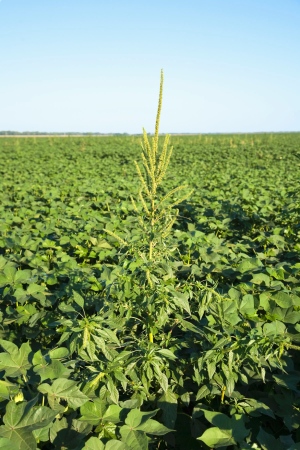 With its jumble of leaves and pointy, green, flower spikes, the plant known as pigweed or palmer amaranth (Amaranthus palmeri) isn’t much to look at. But to farmers in the southeastern United States, it is a formidable foe. Having evolved the ability to withstand glyphosate, the main ingredient in Monsanto’s popular herbicide Roundup, it now flourishes unchecked alongside crops such as cotton and soya bean that are genetically modified to be glyphosate tolerant.

And it is not unique, says agronomist Harold Coble at the Office of Pest Management Policy in Raleigh, North Carolina, part of the US Department of Agriculture (USDA), who notes that 383 known weed varieties have the genetic defences to survive one or more herbicides. “Weed resistance is a game changer for agriculture in the same way that drug resistance has been a game changer for the health-care industry,” says Coble, who spoke on 10 May at a Weed Summit in Washington DC convened by the National Academies. The problem has escalated since the widespread introduction of Roundup Ready and similar crops over the past decade allowed farmers to apply glyphosate more liberally. At the summit, distinctly different responses to the challenge were up for discussion.

The conventional approach is to switch to a different herbicide and engineer crops to withstand it. This has produced a wave of genetically modified crops under review by the USDA, which earlier this year made changes to speed up its approval process. Next to receive a green light could be maize (corn) that is tolerant to glyphosphate and 2,4-dichlorophenoxyacetic acid (2,4-D). Created by Dow AgroScience in Indianapolis, Indiana, the plants can break down both of the chemicals in Dow’s newly formulated herbicide Enlist. “You’re applying two different ways of killing the weed at the same time,” says Mark Peterson, global biology team leader at Dow. “The odds that you’re going to have a weed that’s resistant to both are very low.”

Environmental groups oppose Dow’s application, which drew more 365,000 public comments last month. News reports have drawn attention to the fact that 2,4-D was one of the ingredients (although not the most toxic) in the defoliant Agent Orange, used during the Vietnam War.

Researchers are also wary of engaging in a continuing arms race with nature. “A number of analysts feel that such an approach is short sighted and doomed to fail,” says agronomist Matt Liebman of Iowa State University in Ames. The chief worry is that new herbicide blends will accelerate the emergence of resistance to multiple chemicals. In a paper published in January, weed ecologist David Mortensen of Pennsylvania State University in University Park and his colleagues argue that the growing number of multiresistant weed varieties proves that “weeds can defy the probabilities” (D. A. Mortensen et al. BioScience 62, 75–84; 2012). Mortensen expects that increased reliance on two herbicides will favour plants with multiple mutations for resistance to each, as well as the emergence of plants with more general survival strategies, such as the ability to break up certain molecular structures or to confine herbicides in cell vacuoles. “These are traits that could overcome more than one chemical mode of action and see an increase in selection pressure,” says Mortensen.

How much of an increase depends on how widely the multitolerant crops are planted and how frequently the herbicide combinations are used. Although Dow will include a set of recommended management practices with its products, “there are no enforcement regulations”, says Carol Mallory-Smith, a weed scientist at Oregon State University in Corvallis. The threat of multiresistance has prompted a return to older methods of weed control. Stanley Culpepper, a weed scientist at the University of Georgia in Tifton, has shown that planting a cover crop of rye blocks sunlight and reduces the number of pigweed seeds that germinate by 75%. In Georgia and elsewhere, Culpepper says, herbicide resistance is already forcing farmers to combine such techniques with conventional herbicide use.

New machinery could also help. At the weed summit, agronomist Michael Walsh of the University of Western Australia in Crawley described the Harrington Seed Destructor, a harvester that collects weed seeds along with the crop, smashes up about 95% of them, and sprinkles the harmless remains in its wake.

“The weeds that have survived the crop season are the ones that are the most likely to have stacked resistance because they’ve survived herbicide applications, so that’s why we’re pushing these harvesting techniques,” says Walsh.

And then there are biocides. The USDA and the agrochemical industry are looking into the use of the natural chemical defences of plants and microbes to control weeds. On 17 May, the US Environmental Protection Agency approved a bioherbicide from Marrone Bio Innovations in Davis, California. Its primary component is derived from the soil bacterium Streptomyces and disrupts weed-cell division. Such solutions may be easier on the environment but if overused could still breed resistance.

Most agree that farming in a post-Roundup era will be more complicated. “The reality of weed management without the silver bullet of glyphosate is that we need to revert to a many-hammers approach — crop rotations, cultivations, tillage, appropriate herbicide application,” says agronomist Charles Benbrook, a research professor at Washington State University’s Center for Sustaining Agriculture and Natural Resources in Puyallup. “It’s going to take more time, it will take more management care, and it will probably cost more money.”