A combination of ice and wind pushes rocks across Racetrack Playa.

Ending a half-century of geological speculation, scientists have finally seen the process that causes rocks to move atop Racetrack Playa, a desert lake bed in the mountains above Death Valley, California. Researchers watched a pond freeze atop the playa, then break apart into sheets of ice that — blown by wind — shoved rocks across the lake bed.

Until now, no one has been able to explain why hundreds of rocks scoot unseen across the playa surface, creating trails behind them like children dragging sticks through the mud.

“It’s a delight to be involved in sorting out this kind of public mystery,” says Richard Norris, an oceanographer at the Scripps Institution of Oceanography in La Jolla, California, who led the research with his cousin James Norris, an engineer at Interwoof in Santa Barbara, California. The work was published on 27 August in PLoS ONE1.

Geologists previously speculated that some combination of wind, rain and ice would have a role. But few expected that the answer would involve ice as thin as windowpanes, pushed by light breezes rather than strong gales.

Visitors to Death Valley have to go out of their way to visit Racetrack Playa, which sits 1,130 metres above sea level and is a bumpy three-hour drive from the nearest town. The researchers began studying the region in 2011, setting up a weather station and time-lapse cameras and dropping off rocks loaded with Global Positioning System (GPS) trackers. The rocks were designed to start recording their position and speed as soon as something made them move. 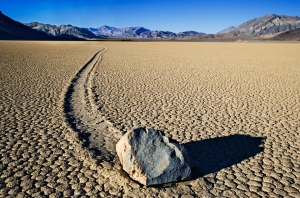 Rocks at Racetrack Playa seem to move on their own, leaving mysterious trails behind.

What was not clear was how long the Norrises would have to wait. Ralph Lorenz, a planetary scientist at the Johns Hopkins University Applied Physics Laboratory in Laurel, Maryland, has been studying the playa since 2007 as an analogy to lake beds on other planets. He had little faith that the GPS-equipped rocks would move in a time frame that anyone would capture. “I thought it was going to be the most boring experiment in the history of science,” he says.

But when the researchers travelled to the playa in December 2013 to check instruments and change batteries, they found a huge ice-encrusted pond covering about one-third of the 4.5-kilometre-long playa. After several days of camping, they decided to sit above the southern end of the playa on the morning of 20 December. “It was a beautiful sunny day, and there began to be rippled melt pools in front of us,” Richard Norris says. “At 11:37 a.m., very abruptly, there was a pop-pop-crackle all over the place in front of us — and I said to my cousin, ‘This is it.’ ”

They watched as the ice began moving past the rocks, mostly breaking apart but also shoving them gently. The rocks began to inch along, but their pace was too slow to spot by eye. “A baby can get going a lot faster than your average rock,” Richard Norris says.

But when the ice melted away that afternoon, they saw freshly formed trails left behind by more than 60 moving rocks. And on 9 January, James Norris returned to the playa with Lorenz and was able to record video of the roving rocks. “This is transformative,” says Lorenz. “It’s not just an anecdotal report, but we have before and after pictures, and meteorological information simultaneous with the event.” By the end of the winter, the farthest-moving rock had travelled 224 metres.

Racetrack Playa rocks move rarely — “maybe a few minutes out of a million,” Lorenz says. And the two events the scientists saw, with thin ice panes shoving the stones across a wet playa, do not necessarily explain every instance of rocks moving there. “But this breaks the back of the problem scientifically,” Lorenz says. “It is ice shove.”

Solving the Racetrack Playa mystery is not exactly a major scientific breakthrough, Lorenz says, but the work does show the rare combination of conditions that allow rocks to move seemingly on their own. And ice shove can have notable effects — in 1952, it uprooted enough telephone poles at a lake in Nevada to break a transcontinental telephone line.

One person who is happy to see the latest results is Dwight Carey. As a university student in the 1970s, he helped with an experiment in which two rocks were placed in a corral on the playa. Over the course of a winter, one stone moved out of the corral, unobserved, and the other did not2.

The new explanation “makes sense to me”, says Carey, who is now an environmental regulatory consultant in Brea, California. “Eventually you’re going to get enough force on the pile of ice behind the rocks to be able to move them.”