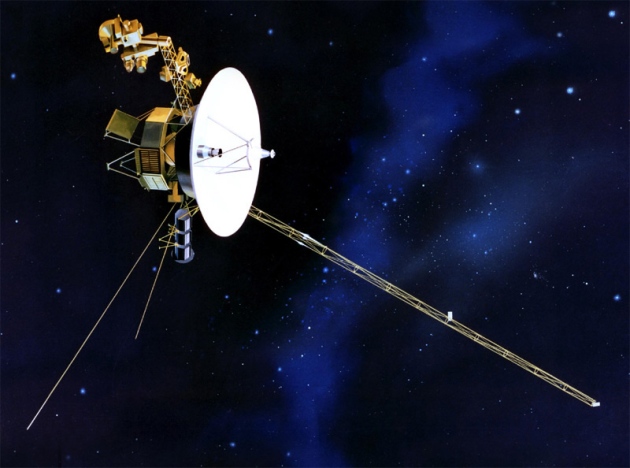 After 35 years in space, Voyager 1 is nearing the edge of the Solar System.

The debate is over. The venerable Voyager 1 spacecraft has entered the uncharted territory of interstellar space.

A team led by Don Gurnett, a space physicist at the University of Iowa in Iowa City, reports compelling evidence that Voyager has exited the heliosphere, the Solar System’s protective bubble of charged particles. The findings, published online today in Science1, settle an argument that has raged among members of the Voyager team for more than a year.

“This is a milestone,” says Ed Stone, a physicist at the California Institute of Technology in Pasadena, who has been the project scientist for the Voyager 1 and 2 spacecraft since 1972, five years before their launch. Voyager 1’s entry into interstellar space “ranks with circumnavigating the globe and the first steps on the Moon,” says Stone, who was not involved in the latest study.

The research is based on measurements of the ionized gas, or plasma, through which the spacecraft travels. The frequency at which the plasma vibrates is a sensitive indicator of its electron density, which is predicted to be about 100 times higher in the cold interstellar medium than it is within the warmer bubble of the heliosphere.

Gurnett and his collaborators calculate that recent increases in electron density found by Voyager 1 match the predicted density of the interstellar medium. The findings, combined with other spacecraft data, indicate that Voyager 1 left the heliosphere on or about 25 August 2012, when the craft was 121 astronomical units (18 billion kilometres) from the Sun.

Gary Zank, a theoretical physicist at the University of Alabama in Huntsville, calls the results definitive. “There is no doubt that we’re in interstellar space,” he says.

Previous data had suggested that the craft had already left the solar bubble. Evidence included a drop in the number of relatively low-energy cosmic rays that are thought to reside within the Solar System, along with a simultaneous upswing in higher-energy cosmic rays coming from outside the Solar System. However, that shift was not accompanied by a predicted change in the direction of the magnetic field in Voyager’s vicinity.

Gurnett says that the calculated electron densities should settle the controversy. Those oscillations were serendipitous, the team notes, because some energy source has to disturb the material to generate the vibrations. It takes a solar tsunami — shocks carried into space from eruptions on the Sun — to set the plasma in motion, ringing it like a bell, Stone says.

Stone is careful to say that, although Voyager 1 has exited the heliosphere, it has not left the Solar System. The Oort cloud, a distant reservoir of comets, lies far beyond the solar bubble in interstellar space, but it is part of the Solar System and gravitationally bound to the Sun.

But with Voyager 1 firmly outside the heliosphere, “it’s a whole new mission”, Stone says. Until about 2025, when the craft is expected to run out of its plutonium power source, Voyager 1 can explore the magnetic field, cosmic rays and density of interstellar space. Voyager 2, now 102 astronomical units (15 billion kilometres) from the Sun, is only a few years behind in joining its sister craft in the vastness of space beyond the solar bubble.