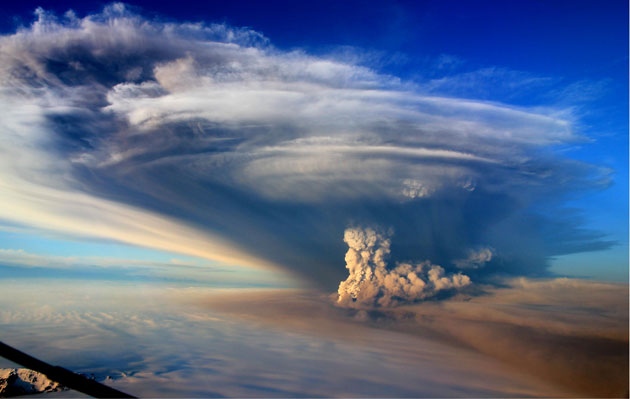 Ground near the Grímsvötn volcano in Iceland shifted half a metre just before a major eruption in 2011.

An Icelandic volcano that spurted out a 20-kilometre-high ash plume in May 2011 has given researchers another possible tool for forecasting future eruptions.

An hour before the Grímsvötn volcano erupted, a Global Positioning System (GPS) instrument perched on its flanks showed the ground shifting noticeably. Those data, streamed in real time back to volcanologists, revealed not only that the eruption was imminent, but also its likely size.

“A GPS site can tell you not only that there’s unrest at a volcano, but that it’s about to erupt and then how high its plume will be,” says Sigrún Hreinsdóttir, a geophysicist at the University of Iceland in Reykjavik. She and her colleagues report the discovery today in Nature Geoscience1.

Knowing that an eruption is about to occur helps emergency officials to prepare for a disaster by closing roads or evacuating nearby residents. And knowing how high a volcano’s ash plume may reach helps airlines to plan for whether they need to re-route flights, or even close airports. The 2011 Grímsvötn event, the largest volcanic eruption in Iceland in nearly a century, temporarily grounded flights in parts of the United Kingdom — a small reminder of the multimillion-euro losses that were incurred as a result of planes being grounded a year before that, when the Icelandic volcano Eyjafjallajökull erupted.

Grímsvötn is Iceland’s most active volcano, but it is difficult to monitor because it is buried beneath a vast ice sheet. Hreinsdóttir’s team put a GPS station on a rare rocky outcrop, which was kept ice-free by a pipe funnelling up geothermal heat from below. Shortly before the eruption, the ground began to shift, eventually lurching by more than half a metre.

Using equations that describe the physical characteristics of an underground magma chamber, the scientists translated the GPS-measured ground movement into changes in pressure inside the chamber. That in turn was linked strongly with the height of the ash plume that came from the eruption. “If you had water in a balloon and squeezed it really hard, then the height of the water coming out of the balloon would correlate with how hard you were squeezing,” says Hreinsdóttir. “It seems fairly simple, but we haven’t been able to show that before.”

Seismic instruments can detect an impending eruption, because earthquakes usually come fast and furious right before such an event. But only the GPS data hint at the actual size of the eruption to come, Hreinsdóttir says.

The work could prove useful at remote volcanoes, such as those in Alaska's Aleutian Islands, where there are few webcams watching to see whether an eruption is occurring. Pilots flying across the North Pacific often have to guess whether there is an ash plume they need to avoid.

But the biggest challenge may be monitoring more volcanoes in real time, says Paul Segall, a geophysicist at Stanford University in California. Many volcano observatories, including that in Alaska, have lost funding in recent years.

Hreinsdóttir also wants to observe another Icelandic volcanic event, to confirm that GPS can be used for forecasting. ”We need another eruption to prove we are right,” she says.

This story originally said that Paul Segall believed that installing GPS equipment would be the biggest challenge. In fact, he meant that getting more volcanoes monitored in real time would be the challenge. The text has been corrected to to reflect this.