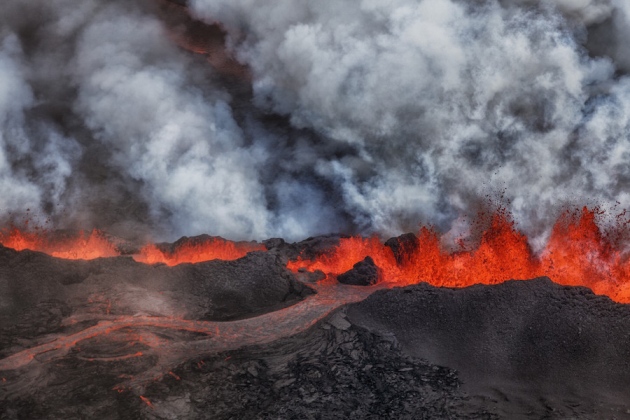 Lava from Earth's mantle has given scientists clues about the origin of the planet's water.

The origin of Earth’s water has puzzled scientists for decades. Icy comets smashing into the planet seemed like natural donors, but many comets have water chemistry different from that of Earth’s oceans. Rocky asteroids that contain water might have soaked the young planet, but analyses of meteorites — the asteroids’ remnants on Earth — show that the planet today is missing the material that those impacts should have left behind.

Research published today in Science1 provide evidence for a different theory: that water has been around since the Earth formed, trapped on grains of dust that aggregated to make a planet. Measurements of volcanic rock suggest that at least some of Earth's water might have such primordial origins.

Earth is like an avocado, says Steve Mojzsis, a geologist at the University of Colorado Boulder. The avocado’s skin and stone are like Earth’s crust and core, and in between sits the fruit — the mantle, in Earth’s case.

Over the course of the planet’s history, tectonic forces churned together the crust and the upper portions of mantle, adding new material to the mix as Earth collided with other rocky inhabitants of the Solar System. But the deepest parts of the mantle remained relatively untouched, and material from them that travels through volcanic plumes to the surface can provide clues about the planet’s early formation.

To search for a chemical signature of early water, Lydia Hallis, a planetary scientist then at the University of Hawaii in Honolulu, and her colleagues studied such volcanic rocks. The samples, from Iceland and Baffin Island in Canada, contained material that had sprung from the deepest recesses of the mantle.

When such material rises to Earth’s surface and spills out as lava, it can quickly harden and trap water and other compounds from the deep mantle in crystallized bubbles known as melt inclusions. After pinpointing the location of these regions with microscopes, the researchers were able to vaporize them and analyse their composition with a mass spectrometer.

The team examined the ratios of two isotopes of hydrogen — ordinary hydrogen and the heavier deuterium — either of which can pair with hydrogen and oxygen to form water. The ratio of the isotopes can serve as a signature of water’s origin.

The deuterium levels in the inclusions were relatively low compared to those of Earth’s oceans, but similar to those found in some families of meteorites — indicating that Earth and the meteorites’ parent asteroid may have formed in similar ways. The authors argue that the low ratio results from deep material with an even lower ratio rising to the surface and collecting deuterium from the upper mantle. They conclude that around 20% of the water in their samples may have been there when Earth formed.

This could be due to water sticking to dust grains in the swirling disk of the early Solar System, the paper suggests. Although it was hot at Earth’s location in the early disk, calculations2 suggest that if the grains had a fractal surface, they could have collected enough water.

“Regardless of all these uncertainties, this is an interesting measurement,” says David Jewitt, a planetary scientist at the University of California, Los Angeles.

Ultimately, Jewitt says, there is probably not a single origin for all of Earth’s water. “The water we have has got to be some mixture from all these different sources and conceivably from other ones that we haven't even thought about yet,” he says.

Hallis says that additional samples could shed more light on primordial water. “I would really like to go to Baffin Island to collect more samples,” she says. “I think it would be a really good field expedition.”