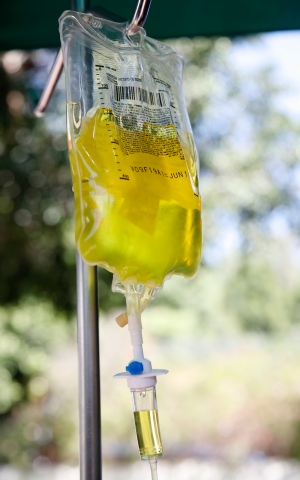 Vitamin C may reduce chemotherapy side effects when given intravenously.

People with ovarian cancer who receive high-dose vitamin C injections are less likely to report toxic side effects from chemotherapy than people who had chemotherapy alone, according to the results of a small clinical trial.

The study, published today in Science Translational Medicine1, was too small to assess whether the combination of chemotherapy and vitamin C combats cancer better than chemotherapy alone. But accompanying work in mice suggests that the two treatments could be complementary.

The results are the latest salvo in long-running controversy over the use of vitamin C against cancer. Early studies championed by Nobel-prizewinning chemist Linus Pauling in the 1970s suggested that vitamin C could help to fight tumours2. But larger clinical trials failed to substantiate those claims3, 4.

As a result, the very topic of vitamin C in cancer treatment is taboo among many scientists and physicians, says Melanie McConnell of Victoria University of Wellington in New Zealand, who has studied the effects of high doses of vitamin C on cancer cells grown in culture. “When you present this kind of work and you put up the first slide, everyone snickers,” she says.

Despite such attitudes, people with cancer are flocking to the treatment, says Jeanne Drisko, a physician who practises integrative medicine at the University of Kansas Hospital in Kansas City. Drisko and her colleagues, including cancer researcher Qi Chen, who is also at the University of Kansas, decided that the purported effects of the vitamin warranted a closer look. They noticed that earlier trials had partially relied on intravenous administration of high doses of vitamin C, or ascorbate, whereas the larger follow-up studies had used only oral doses of the drug.

This, they reasoned, could be an important difference: ascorbate is processed by the body in different ways when administered orally versus intravenously. Oral doses act as antioxidants, protecting cells from damage caused by reactive compounds that contain oxygen. But  vitamin C given intravenously can have the opposite effect by promoting the formation of one of those compounds: hydrogen peroxide. Cancer cells are particularly susceptible to damage by such reactive oxygen-containing compounds.

The team followed up on these results with a clinical trial in 25 people with ovarian cancer, 13 of whom received both chemotherapy and vitamin C injections. These people were less likely to report side effects from the chemotherapy treatment than those who received chemotherapy alone.

McConnell, who was not involved in the study, cautions that the approach might not work for every type of cancer. She notes that some cancers express low levels of a molecular transporter that takes up vitamin C, and therefore may not be as susceptible to the treatment.

But she agrees that it is time to do a larger trial to find out whether the approach is worthwhile, especially because people are already seeking out the treatment. “There’s a long way to go before people stop snickering,” she says. “If it works, then great. And if it’s doing more harm than good, then that’s something we need to know, too.”