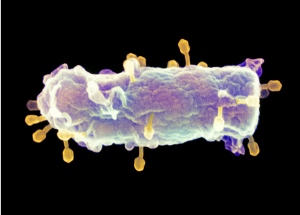 Viruses known as bacteriophages, seen here attacking an E. coli (in a coloured scanning electron micrograph), abound in the mucus of organisms across the animal kingdom, where they help keep bacteria in check.

“Mucus is everywhere,” says microbiologist Jeremy Barr. Almost every animal uses it to make a barrier that protects tissues that are exposed to the environment, such as the gut or lungs. Now, Barr and a team of researchers have discovered that mucus is also the key to an ancient partnership between animals and viruses.

Barr and his colleagues, who are based at San Diego State University in California, show that animal mucus — whether from humans, fish or corals — is loaded with bacteria-killing viruses called phages. These protect their hosts from infection by destroying incoming bacteria. In return, the phages are exposed to a steady torrent of microbes in which to reproduce. “It’s a unique form of symbiosis, between animals and viruses,” says Rotem Sorek, a microbial geneticist at the Weizmann Institute of Science in Rehovot, Israel, who was not involved in the research.

“It’s groundbreaking,” adds Frederic Bushman, a microbiologist from the University of Pennsylvania in Philadelphia. “The idea that phage can be viewed as part of the innate immune system is original and exciting.” The results are published in the Proceedings of the National Academy of Sciences1.

The study’s leader, microbial ecologist Forest Rohwer, has been collecting mucus from across the animal kingdom for years, and noticed that these samples contained over four times more phages than the surrounding environment. “One of the most exciting aspects about this symbiotic relationship is that it likely acts at all mucus surfaces, and has been evolving ever since mucus was first produced,” says Barr.

Mucus mainly consists of huge molecular complexes called mucins, which are made up of thousands of glycan sugars attached to a central protein backbone. The team showed that phages stick to these sugars, which Barr likens to a “large biological bottlebrush”.

The glycans are constantly changing and extremely variable, but the phages have equally diverse proteins in their coats, which allow them to cling to this inconsistent environment. The team showed that the presence of phages reduced the number of bacteria that can attach to mucus by more than 10,000 times.

Barr says he thinks that the phage strains found most often in mucus will be those that target the most common bacteria, providing a sort of 'mucus memory' against the most relevant local microbes. But because mucus is continuously being shed and replenished, these relationships are in constant flux. Barr, Rohwer and the team are now trying to simulate the evolutionary dynamics within this realm of mucus.

The researchers are also exploring the implications for human health. For example, Barr wonders if one could deliberately coat an individual’s gut with mucus-bound phages that are specifically directed against disease-causing bacteria. “This may provide an increased basal level of immunity against such infections,” he says.

Sorek adds that, in the past few years, scientists have started to appreciate how common phages are in the gut and how they influence human health by shaping the resident microbe communities. He wants to know if animals can recruit mucus-bound phages in a “smart” way, to select for beneficial bacteria over those that cause disease.

Barr thinks that this might be so. He notes that phages sometimes insert their genetic material into a bacterium’s genome rather than killing it outright — a process that can actually protect the bacterium against other phages. Barr speculates that in this way, mucus-borne phages might protect bacteria that benefit their animal hosts, while destroying those that cause harm.