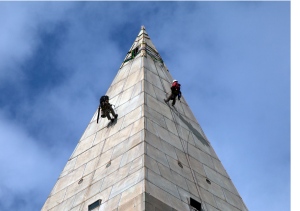 The surprise magnitude-5.8 earthquake that stuck central Virginia and rattled cities up and down the US East Coast last year was a record-breaker in more ways than one. Not only was it felt by more Americans than any previous tremor, it triggered landslides over a wider area than any other recorded quake anywhere in the world, scientists say. A detailed analyses of ground motions triggered by the event also indicates that Washington DC and other affected population centres could be at a higher risk of major ground movement than previously recognized.

Centred roughly 130 kilometres south-southwest of the US capital, near the town of Mineral, Virginia, the 23 August 2011 quake was the strongest to strike the eastern United States since 1897, Susan Hough, a seismologist with the US Geological Survey (USGS) in Pasadena, California, reported this week at the Geological Society of America's annual meeting in Charlotte, North Carolina. The quake was felt from Florida to southeastern Canada and as far west as Wisconsin, she noted.  By some estimates, as much as one-third of the US population was shaken by it.

Because of a variety of factors, including the age, type, temperature and density of the rocks underlying the eastern United States, seismic waves are transmitted more efficiently there than in the western states. The area shaken by the magnitude-5.8 quake was approximately the same size as that rocked by a much larger magnitude-7.2 tremor that struck Baja California in April 2010, Hough noted.

The Virginia quake was strong enough to do serious damage to some of Washington’s landmark buildings. The National Cathedral suffered about US$20 million in structural damage, including fallen statues and cracked gargoyles. At the Washington Monument, much of the damage was confined to the pyramid-shaped top of the 169-metre-tall obelisk. Analyses of seismic data gathered at an instrument near the monument suggest that accelerations due to ground motions did not exceed 0.07g. That would normally not be expected to cause damage, but Donald Wells, an engineering geologist at AMEC, a consulting firm in Oakland, California, says his team’s models suggest that passing seismic waves vibrated the tall, slim monument like a tuning fork.

Other data from the Virginia earthquake suggest that US cities on the eastern seaboard could be more affected by future earthquakes of a given size than previously thought. An unusually high fraction of the seismic energy radiating from last year’s quake was directed towards the northeast, where several major population centres lie, along the network of faults in the region, says Rufus Catchings, a seismologist with the USGS in Menlo Park, California. This preferential concentration and amplification of seismic energy has been noted in other fault-ridden regions of the world, but hadn’t been measured in the eastern United States, partly because substantial quakes are not that frequent there, he told the meeting.

Catchings suggests that more seismometers should be deployed in and around Washington and other cities along the eastern seaboard, to assess to what degree seismic waves generated in the region might be amplified. “My guess is, it’s going to be substantial,” he notes — possibly as much as three to five times the values normally expected. Besides shedding light on seismic risk, this exercise would reveal whether particular buildings need to be retrofitted in order to stand up to future quakes.

The unusually large ground motions for a magnitude-5.8 quake also triggered rockfalls across an unexpectedly large area, reported Randall Jibson, a geologist with the USGS in Denver. He and a colleague surveyed the area surrounding the quake for fresh landslides in the days immediately after the event. None of the rockfalls caused any damage or injuries.

Although individual landslides weren’t especially large, the pattern of rockfalls set a record. Previous studies suggested that a magnitude-5.8 quake shouldn’t trigger landslides more than 60 kilometres from its epicentre, says Jibson. But last year’s quake caused rockfalls at least 245 kilometres away, he reported. “This is by far the largest distance recorded for a quake that size,” he notes.