It usually takes two snakes — a female and a male — to make a litter of baby copperheads. But research now shows that copperheads (Agkistrodon contortrix) and their venomous cousins cottonmouths (Agkistrodon piscivorus) don’t always require a partner to establish the next generation. These vipers are capable of virgin births.

For some vertebrates, parthenogenesis — asexual reproduction in which embryos develop without fertilization — is the norm. The New Mexico whiptail lizard (Cnemidophorus neomexicanus), for example, is an all-female species that reproduces without any genetic contribution from a male. 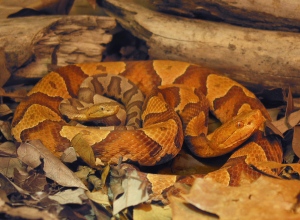 But in zoos and aquariums, zoologists have begun to document the strange phenomenon of facultative parthenogenesis: females of species that usually reproduce sexually, delivering offspring without mating. Surprise pregnancies have been documented among birds, sharks, snakes and Komodo dragons (Varanus komodoensis), but until now, only in captivity.

Warren Booth, a molecular ecologist at the University of Tulsa in Oklahoma, now reports the first known case of wild facultative parthenogenesis, publishing the study today in Biology Letters1.

In work conducted while he was at North Carolina State University in Raleigh, Booth and his colleagues captured pregnant wild copperheads and cottonmouths, which gave birth in the lab. The researchers suspected that some of the snakes had reproduced without male input: in comparison with those born from sexual unions, says Booth, asexually reproduced snake litters typically have a large number of failures in development such as stillborn babies, and few viable males. When he saw that some of the snakes had delivered broods with these characteristics, “these litters were at the top of my agenda to genotype”, says Booth.

Booth examined genetic markers in the mothers and offspring to check whether the young snakes had really been born as a result of facultative parthenogenesis, or were unusual broods sired by males that were genetically similar to the mother.

“When I got the results of the DNA sequencer, I was floored,” he says. The genotyping compared the genetic make-up of the offspring with the populations from which the snakes were collected; the results indicated that the chance of a male contribution was “infinitesimally small”. Researchers had always believed that facultative parthenogenesis took place in the wild, Booth notes, but he and his colleagues were “stunned” at finally finding the evidence.

It is not clear how asexual reproduction evolved in normally sexual species, but the absence of a process called genomic imprinting may have had a role. In mammals, genomic imprinting causes a set of genes from one parent to dominate over the other, and this interaction requires genes from both parents to create viable offspring. Reptiles don't undergo genomic imprinting, so mating isn't required for mothers to develop their young — but it is not known why.

Nor is it known what spurred the female snakes to reproduce asexually. Booth points out that isolation from males is not the key: the snakes were collected from habitats with males, which undoubtedly were on the lookout for females. For whatever reason, the females forsook their potential mates, or rejected sperm from pairings, to deliver parthenogenic litters. Booth says that the finding removes the “prevailing dogma” that facultative parthenogenesis occurs only when females are isolated.

Phill Watts, an ecological geneticist at the University of Liverpool, UK, agrees that the study calculated “a convincingly low probability for male parentage”. The discovery may motivate other researchers to search for further examples. “We still lack data to understand when and why facultative parthenogenesis happens in the wild,” says Watts. There are almost certainly other asexually reproducing snakes, sharks and lizards out there, but the biological impetus for their wonderful births is, as yet, a mystery.