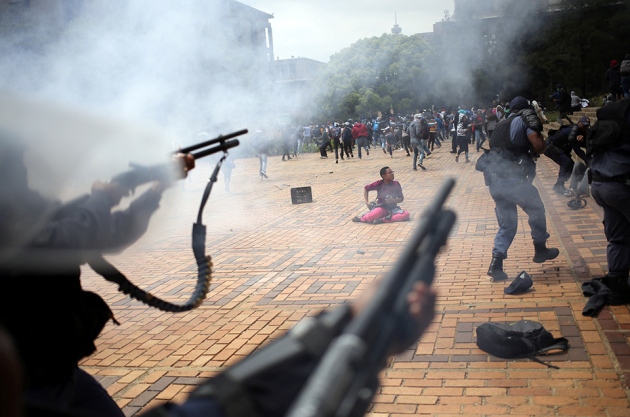 Police clash with students at protests in Johannesburg, South Africa, on 4 October.

A heavy security presence awaits academics at the University of KwaZulu-Natal campus in Westville, South Africa. After a library at the university’s nearby Durban campus was torched last month, police officers now regularly search staff and their cars for petrol bombs, says Kavilan Moodley, an astrophysicist there.

Still, the institution remains open for research and teaching. On the other side of the country, all classes and lab-based research at the Cape Peninsula University of Technology (CPUT) in Cape Town have ground to a halt. The lockdown follows a non-fatal attack late on 11 October in which three men were locked in a university building that was then set on fire. “The physical lockdown has been about a week. Since the arson attacks, we could not guarantee staff and students’ safety,” says Mellet Moll, assistant dean for research in the engineering faculty.

Campus violence is affecting many of South Africa’s 26 universities — and the impact is spilling over into research. Student protests against rising tuition fees began in 2015 as the #FeesMustFall campaign, which secured a freeze on fees for this academic year. But the protests flared up again and have become increasingly physically destructive since September, when the government announced that an 8% hike in fees would be permitted for the 2017 academic year. Many undergraduate classes around the country have been stopped, including those at the University of Cape Town (UCT), where face-to-face teaching has been suspended in all faculties. Last week, two security guards were attacked.

The effects on research are uneven. Scientists at the UCT, the University of the Witwatersrand in Johannesburg and the University of Pretoria say that, despite the distraction of protests and security, and difficulties in getting packages delivered, they are able to continue with their work. At the CPUT and the University of the Western Cape (UWC) in Cape Town, however, protests have been catastrophic for research. A senior academic at the UWC says that the situation is dire. With the university closed, funding is going unspent, causing international study visas and bursaries for master’s and doctoral students to expire with research not yet complete.

University administrators are in a bind. Steadily rising fees have enraged students, who connect the issue to the social and racial disadvantage that persists two decades after the end of apartheid. But higher-education institutions say that they rely on those fees to make up for declining government subsidies. “It’s a crisis we are all facing,” Moll says. “But it’s something that the universities themselves cannot do a lot about. We’ve become the battle-ground between the government and the youth.”

Academics are also worried that, in the longer term, the violence could damage universities’ reputations — which could put off foreign students and international collaborators, even at institutions that have not otherwise been affected by the protests. “I’m concerned that if we don’t resolve this within a reasonable timescale, we’ll be seen as dysfunctional, even if it’s not true,” says Don Cowan, director of the University of Pretoria’s Genomics Research Institute.

Researchers are also concerned at the prospect of falling budgets as the government — struggling with a combination of the student crisis, the country’s worst drought in decades and slow economic growth — looks to trim other areas of spending. The South African Medical Research Council, for example, has been given a 7% budget cut for the year 2017–18, says council head Glenda Gray.

For now, undergraduates are the main concern: universities across the country are holding emergency meetings, general assemblies and peace accords in a desperate bid to keep the academic year alive. “We are now reaching the ‘point of no return’ in terms of saving the academic year,” said UCT vice-chancellor Max Price in a notice to students and staff last week.