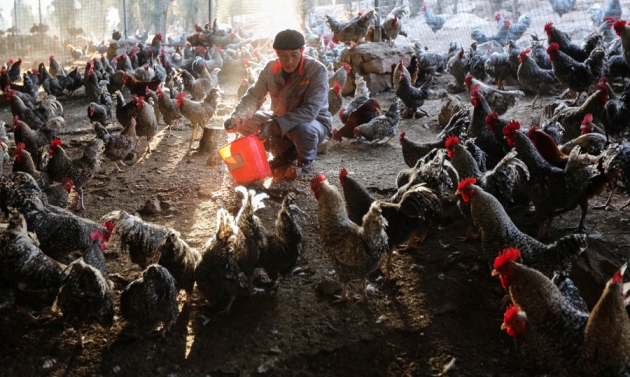 The H7N9 avian-influenza virus that has killed more than 100 people in China in the past year has for the first time been detected in a province bordering Vietnam, raising the prospect that the disease may take hold across Asia and beyond. It was found in poultry in the live-bird markets of southern China’s Guangxi province in late January, and has caused three known human cases in the region.

The news comes as a surge in human H7N9 flu cases in China since the start of the year shows signs of abating, possibly because of the re­introduction of control measures. Vietnam, which had already prepared response plans for such an H7N9 outbreak, has placed itself on high alert. “There is a very high likelihood of H7N9 entering the poultry sector in Vietnam,” says Peter Horby, a researcher at the Oxford University Clinical Research Unit in Hanoi.

H7N9 flu was first detected in China in March last year, and almost all of the human cases were reported the following month. They subsequently dropped off sharply after the prompt, temporary closure of live-bird markets, which were quickly identified as the places where most human infections occurred. Researchers say that the surge in cases since the start of the year is probably due to the arrival of winter and the intense poultry trading at live markets in the run-up to the Chinese New Year on 31 January.

So far, more than 200 human cases of H7N9 flu have been registered in China this year, compared with around 160 recorded in 2013 (see ‘Ups and downs’). This year’s outbreak has been centred in many of the same eastern provinces as last year’s, although with a coastal and southerly shift (see ‘The flu front line’). Zhejiang and Guangdong provinces are the worst affected. Last week, the first human case of H7N9 flu was detected in Jilin province in the far north of the country, raising a further risk of spread to North Korea and Russia, which border the province. 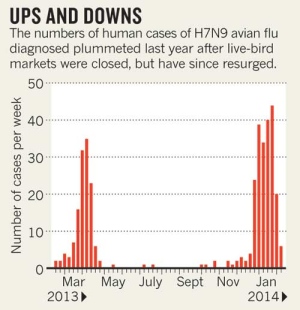 Vietnam, at least, is well prepared. The country was hit hard by another avian-flu virus, H5N1, a decade ago, and suffered enormous economic losses and more than 60 human deaths. Learning from that experi­ence, it has since introduced measures to prevent and mitigate avian-flu outbreaks, including boosting the number of veterinary surgeons and improving diagnostic facilities.

To specifically address the risk of H7N9 flu, Vietnam has banned the importation of poultry from China. It has also introduced twice-weekly monitoring for H7N9 in markets in the north of the country, and ordered their weekly disinfection.

In addition, the country’s health and agriculture ministries have developed contingency plans should H7N9 arrive, including closing markets and shutting down trade routes. “Vietnam’s preparedness and response actions should be seen as a model for the region,” says Scott Newman, senior technical coordinator at the Vietnam branch of the Emergency Centre for Transboundary Animal Diseases, part of the Food and Agriculture Organization of the United Nations. 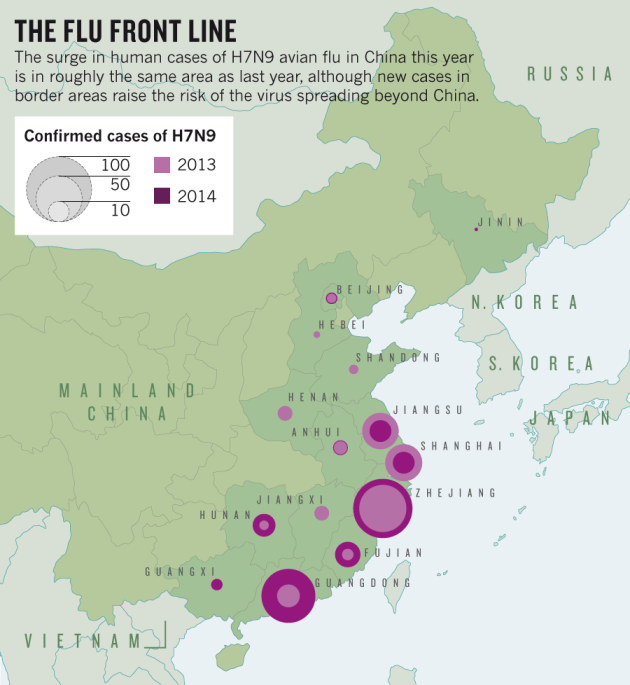 Some researchers are surprised that Chinese cities did not begin to close markets as soon as cases started rising in late December. Zhejiang province began closing markets in cities only at the end of January, for example, and extended this to the rest of the province only on 15 February. The heavily populated city of Guangzhou in Guangdong province began closing its markets on that day too.

“Interventions were clearly less stringent this year,” says Ben Cowling, a flu epidemiologist at the University of Hong Kong. “My impression is that financial concerns had a greater influence this winter compared to last spring.” The Chinese poultry industry has vigorously protested against the policy of shutting down markets.

But the surge in H7N9 flu cases highlights the continuing public-health — and possibly pandemic — threat that it poses. The virus’s epidemiology remains largely unchanged from last year: it is still, essentially, an avian virus that is sporadically infecting humans from a reservoir in poultry, and there is no evidence of any continued human-to-human spread. But the virus is being sustained in unknown reservoirs in the poultry supply chain, making future outbreaks likely, and its geographical expansion is a reminder of the threat beyond China. Furthermore, although case numbers have shown signs of dropping in the past two weeks, it is too early to tell if this marks a clear trend.

One year on from the first outbreak, researchers are still struggling to understand the origins and dynamics of the virus’s reservoirs and spread. H7N9 surveillance is difficult, in part because the virus causes only mild disease in poultry and thus spreads silently, with human cases typically the first warning of a poultry outbreak. H5N1, by contrast, is lethal to birds, making outbreaks easier to spot and control. And despite extensive sampling of farms, wholesale markets and other parts of the poultry supply chain, the only strong link to H7N9 found so far is live-bird markets.

The difficulty of surveillance and of sampling China’s huge poultry industry — it produces 6 billion birds annually — means that this is unlikely to be the full picture, however. Such uncertainty is also hampering efforts to develop effective control measures that are less drastic than closing the markets, says Cowling.