NASA’s Dawn spacecraft won’t end its 13-month-long visit to Vesta, the Solar System’s second-biggest asteroid, until August, but researchers have now solidified the rock’s reputation as an archetype for understanding planetary evolution. In six reports in the 11 May edition of Science1–6, Dawn mission scientists have confirmed several long-held assumptions about Vesta, and detailed some puzzles about the roughly 520-kilometre-diameter body. 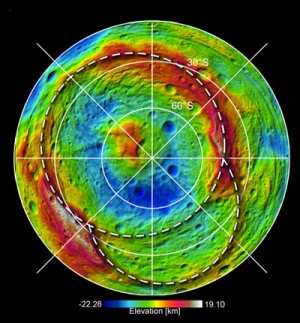 Dawn, which began orbiting Vesta last July and lowered itself to within 200 kilometres of the asteroid over the following months, has gathered strong evidence that Vesta is indeed the source of the 'Vestoid' family of asteroids as well as the howardite-eucrite-diogenite meteorite family, which accounts for 6% of meteorites. The craft’s observations reveal that the surface composition of Vesta matches that of the Vestoids, and that a collision that gouged a large crater at the asteroid’s south pole could have blasted enough chunks into space to account for the Vestoids and the meteorites.

Although previous chemical analysis of the meteorites and studies of the orbits of the Vestoids had indicated that was almost certainly the case, the ground truth from Dawn means “we can, for the first time, connect meteorites with not only a specific asteroid, but a specific crater on a specific asteroid”, says Erik Asphaug, a planetary scientist at the University of California, Santa Cruz. The data, he adds, “will shed a whole new light on lunar and terrestrial cratering data, and on our understanding of smaller asteroids and meteorites”.

Dawn's observations also provide evidence that Vesta assembled only about 2 million years after the first solids in the Solar System coalesced and is an original survivor of the planet-forming process. “What is so mind-blowing about the Vesta results, is that we are seeing, exposed and frozen in time, what it means to become a planet,” says Asphaug. "Vesta lies in the middle of a broad, mostly unknown, continuum, and we will be studying these data sets for many years."

Dawn’s confirmations “are absolutely important for us to proceed in understanding the Solar System”, says Dawn team leader Chris Russell of the University of California, Los Angeles.

To the team’s surprise, Dawn found evidence for not just one but two large, overlapping craters (see dashed lines in accompanying image), one older than the other, at the south pole. The team presented preliminary evidence for that last autumn (see 'Dawn mission revealing secrets of the early Solar System'), but has now firmed up the finding. Hubble images of Vesta, including those taken more than a decade ago, were only sharp enough to have discerned one very large basin there.

“Vesta is much more complicated than we thought (or feared) it might be,” says Dawn scientist Paul Schenk of the Lunar and Planetary Institute in Houston, Texas.

The south-polar impacts peeled away the near-surface deposits of the light-weight mineral eucrite to reveal the deeper deposits of the heavier mineral diogenite. The impacts were also powerful enough to create a central peak within the basin that rivals the biggest mountain known in the Solar System, Mars’ Olympus Mons. “Seismic impulses of this magnitude could take days to dissipate on an asteroid the size of Vesta, so I believe there are novel terrain types to be identified, or exotic forms of known terrain,” says Asphaug.

Shock waves from the two impacts also seem to have sent Vesta ringing like a bell, creating separate sets of troughs that girdle the asteroid’s equator. One set of troughs is easy to see and corresponds to the older and larger impact basin, Rheasilvia, notes Asphaug. The other set is harder to see and not everyone accepts the idea of a second, younger polar basin, “but the alignment of troughs makes for a good story”, he adds. “We certainly don't yet understand the relationships between craters and troughs.”

The Science reports also reveal another surprise: the two polar basins are relatively young, one billion to two billion years old, although the team had first guessed they were 3.5 billion to 4 billion years old and were created during the era known as the late heavy bombardment, when the asteroid belt was thought to be much denser and collisions more common. However, the size distribution of the Vestoid asteroids — many more smaller bodies than bigger ones — suggests that the impact that created them was relatively recent, notes Bill Bottke of the Southwest Research Institute in Boulder, Colorado.

The team is still puzzling over bright and dark markings on Vesta’s surface. These could be due to material brought to Vesta from farther out in the asteroid belt or the result of ancient volcanic activity inside the asteroid, Schenk says.