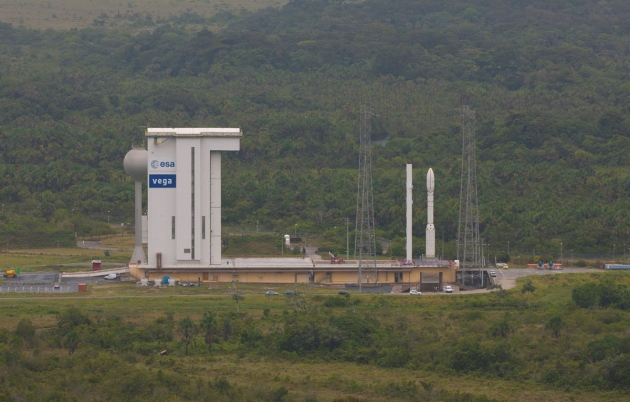 If all goes to plan, the diminutive Vega rocket will lift off from a launch pad in French Guiana next week.

It has been a long countdown. After 25 years, several delays and more than €700 million (US$924 million), the European low-cost rocket Vega is ready for lift-off next week.

Vega is the smallest of three rockets owned by the European Space Agency (ESA), alongside the heavy Ariane V and the intermediate Soyuz. ESA hopes that the new launcher will tap into a market for small scientific satellites, making space research affordable for institutions such as universities.

A 4-stage, 30-metre launcher, Vega is designed to lift satellites weighing between 300 and 1,500 kilograms into orbit at around 700 kilometres above Earth. The idea for the rocket was first developed in the late 1980s, as a project of the Italian government. It was later taken on by ESA, although Italy has remained its main funder, covering about 60% of the budget.

Vega was originally scheduled to launch in 2005, but the programme has suffered repeated delays as a result of technical problems affecting both the development of the rocket and the ground infrastructure at the launch pad in Kourou, French Guiana. The rocket is now on the pad, and ESA director-general Jean-Jacques Dordain has set 9 February as the target launch date.

Quick off the mark

Unlike most inaugural flights — in which rockets carry only a dead load to minimize risk — Vega's first launch will take nine satellites into orbit. The main payload is the Italian Space Agency's Laser Relativity Satellite (LARES), which will study the Lense–Thirring effect, a distortion of space-time caused by Earth's gravity and predicted by general relativity. Vega will also carry ALMASat-1, a demonstration Earth-observation microsatellite from the University of Bologna, Italy, and seven CubeSats — standardized minisatellites developed by various European universities as educational projects. Their applications range from Earth imaging to testing solar panels and radio technologies.

If all goes well with the first launch, five further Vega flights will lift off before 2016, paid for by ESA to promote the rocket. Payloads will include ESA's Earth-observation satellites Sentinel 2, Sentinel 3, Proba-V and Aeolus, as well as the agency's LISA-Pathfinder satellite, which will conduct research on gravitational waves. After that, the rocket will have to find its own market among national space agencies, universities and private companies.

Antonio Fabrizi, ESA's director of launchers, says that Vega will be used mostly to launch Earth-observation satellites. "Whereas astronomy satellites tend to become bigger and bigger, for Earth observation you can see the opposite trend,” he says. “A lot can be done with small satellites, and the economic crisis is making them interesting again.” But, he adds, Vega will not be able to launch telecommunications satellites, the richest market for launchers, because they work at orbits that it cannot reach.

In principle, Vega should become the launcher of choice for small satellites developed by Europe’s national space agencies, which currently use mainly the Russian Dnepr launcher and the Indian Polar Satellite Launch Vehicle (PSLV). David Parker, director of science, technology and exploration at the UK Space Agency, says that his agency will consider Vega for satellites such as the NovaSAR-S Earth-observation mission, depending on cost.

But Avri Selig, head of Earth and planetary science at the Netherlands Institute for Space Research in Utrecht, says that things have changed since Vega was conceived. “In the 1990s it was more common for national space agencies to invest in their own small satellites. Now many of them prefer to build instruments for large ESA and NASA missions.”

CubeSats and other minisatellites will probably be the usual passengers on Vega. “We can always find room for them,” says Fabrizi, “and they are a great opportunity for universities.” But scientists who have developed payloads for the first launch say that ESA will have to change some of its procedures to adapt to working with small research groups. “They apply the same rules as they use for large missions, and request a lot of paperwork and expensive tests which are a problem for universities. That does not happen with Russian launchers,” says Filippo Graziani, an aeronautical engineer at the University of Rome La Sapienza, whose team developed UniCubesatGG, which will be launched on Vega to test a system of solar panels.

Fernando Aguado, a telecommunications engineer at the University of Vigo, Spain, leads XaTcobeo, another CubeSat on the first flight that will measure the ionising radiation that hits the satellite and test a system to reprogramme the onboard instruments while in orbit. He says that working to ESA's high standards can be good for students, because it shows them how satellite research is done. But he would like to see a version of those standards tailored for universities.

For now, ESA's main concern is the success of Vega's first flight. The launch window is very small: a cargo-transfer module for the International Space Station has to lift off from Kourou in early March, and it takes precedence should Vega's launch not be completed before then. Should some new technical problem arise this week, Vega might be delayed indefinitely — once again.

The European Space Agency has annouced that Vega's first flight has been delayed to 13 February.