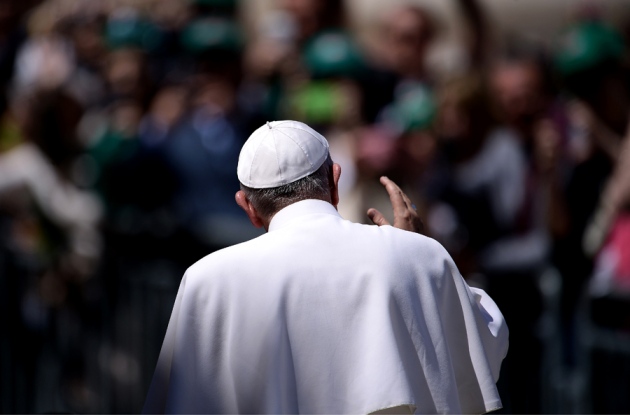 Pope Francis says that humanity has “slapped nature in the face”.

Pope Francis has drawn attention for his progressive teachings on sexuality, contraception and abortion. Now he and the Catholic Church are tackling another contentious issue: climate change.

On 28 April, scientists, religious figures and policymakers will gather at the Vatican to discuss the science of global warming and the danger posed to the world’s poorest people. The meeting comes as Francis prepares an encyclical letter to bishops on climate change for release this summer, ahead of United Nations climate negotiations in December. The Pope’s strong feelings on the matter are apparent: in January he said that people were “mostly” responsible for recent warming and that they have “slapped nature in the face”.

Two scholarly Vatican groups that advise the Pope on scientific issues are organizing the meeting. One, the Pontifical Academy of Sciences, has held several related conferences, including a 2011 meeting on melting glaciers and another last year on sustainable development. But the climate gathering this week is the first at the Vatican to include religious leaders as well as scientists.

Roughly 20–25 individuals representing religions such as Protestant and Orthodox Christianity, Judaism and Islam will join a similar number of scientists. Nobel Prize-winning chemist Paul Crutzen, climatologist James Hansen and former UK Royal Society president Martin Rees were scheduled to attend, along with UN secretary-general Ban Ki-moon and Italian President Sergio Mattarella. All participants will be asked to sign a statement “on the moral and religious imperative of sustainable development”.

Peter Raven, a botanist at the Missouri Botanical Garden in St Louis and an organizer of the meeting, says that such messages are crucial for winning public support for policies to reduce greenhouse-gas emissions. “The only way politicians can put binding agreements in place is if they are convinced that enough people care about the problem,” he says. “And that will only happen if the problem has a strong ethical component.”

Among the moral arguments for action on climate change is the idea that society must preserve Earth for future generations, says another meeting organizer, climate scientist Veerabhadran Ramanathan of the Scripps Institution of Oceanography in La Jolla, California. A further argument is that the world’s 3 billion poorest people produce a fraction of humanity’s annual greenhouse-gas emissions — about 5% — but are predicted to suffer disproportionately from the impacts of climate change, such as more extreme weather.

Francis is not the first major religious leader — nor even the first pope — to speak out on climate change. In a 2009 statement, Archbishop of Canterbury Rowan Williams and other UK religious representatives recognized a moral imperative to address the causes of global warming. And last month, the presiding bishop of the US Episcopal Church, Katharine Jefferts Schori, described those who attribute global warming to purely natural causes as “often driven by greed and self-centred political interests, and sometimes by wilful blindness”.

Closer to home, Francis’s predecessor Benedict XVI made numerous statements on the environment, describing climate change in 2011 as a “worrying and complex phenomenon”. But Ramanathan thinks that the huge popularity of the current pope presents a unique opportunity to raise awareness. “Pope Francis has become a Kennedy-like figure who goes beyond Catholicism and appeals to the whole world,” he says.

Even a popular pope can stir controversy, however. Francis’s support for action on climate change has raised hackles among some conservative Catholics, such as Steve Moore, who is chief economist at the Heritage Foundation, a free-market think tank in Washington DC. Francis has “allied himself with the far left”, Moore says.

But Dan Misleh, executive director of the Catholic Climate Covenant, an environmental group in Washington DC, says that Francis is unlikely to endorse specific policies to fight climate change. “I don’t think he is going to say that a carbon tax is preferable to a cap-and-trade programme,” Misleh says. “But I think he will say that there is a connection between how we treat the planet and how we treat one another.”

Such a strategy will allow Francis to avoid seeming “ideological” while still speaking clearly about the role of humans in climate change, says James Bretzke, a Catholic theologian at Boston College in Massachusetts. Already, he says, several Vatican figures who are likely to be involved in drafting the Pope’s encyclical have made unequivocal statements on global warming. Last year, for example, Bishop Marcelo Sánchez Sorondo, chancellor of the Pontifical Academy of Sciences, said that “essentially all documents published now accept as a scientific truth that climate change is due to human activity”.

The document to be signed at this week’s meeting contains a very similar statement, according to co-organizer Partha Dasgupta, an economist at the University of Cambridge, UK. Attendees were scheduled to discuss the physical and chemical processes that underlie global warming, he says, but a debate on the idea that human activities drive that warming was not planned. “Religious leaders might ask whether other scientists have different views,” says Dasgupta, adding that the small minority of scientists who are sceptical of climate change will not be represented at the meeting.

Still, the Pope will be careful to point out where scientific uncertainties remain, Bretzke predicts. Such caution is borne of the Vatican’s famous over-certainty in the past. “Centuries ago, the Church got on the wrong end of cosmological arguments,” he says. “It has been chastened by that.”