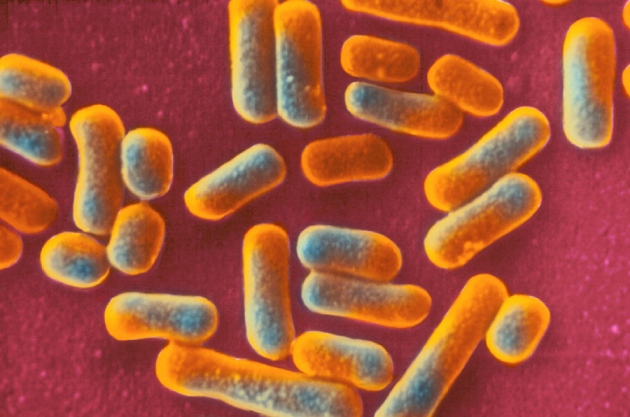 The antibiotic lactocillin was isolated from a Lactobacillus bacterium (shown here).

Bacteria living on human bodies contain genes that are likely to code for a vast number of drug-like molecules — including a new antibiotic made by bacteria that live in the vagina, researchers report in this week's issue of Cell1.

The drug, lactocillin, hints at the untapped medical potential of this microbial landscape.

“They have shown that there is a huge diverse potential of the microbiome for producing antimicrobial molecules,” says Marc Ouellette, a microbiologist at the University of Laval's Hospital Centre (CHUL) in Quebec, Canada, who was not involved in the research.

Studies have suggested that the composition of our microbiomes — the whole suite of bacteria living on our bodies — has huge impacts on our health, but it has been difficult to show exactly how this works.

Michael Fischbach, a microbiologist and chemist at the University of California, San Francisco, led a team that aimed to fill in those blanks. The researchers built a machine-learning algorithm, training a computer program to recognize genes that are already known to make small molecules that could act as drugs. Then they asked the program to hunt for similar genes in the human microbiome. The search yielded thousands of these drug-making genes within microbes living on and in the body. Some are similar to drugs being tested in clinical trials, such as a class of antibiotics called thiopeptides.

“We used to think that drugs were discovered by drug companies and prescribed by a physician and then they get to you,” Fischbach says. “What we’ve found here is that bacteria that live on and inside of humans are doing an end-run around that process; they make drugs right on your body.”

Fischbach’s team then purified one of these: a thiopeptide made by a bacterium that normally lives in the human vagina. The researchers found that the drug could kill the same types of bacteria as other thiopeptides — for instance, Staphylococcus aureus, which can cause skin infections. The scientists did not actually show that the human vaginal bacteria make the drug on the body, but they did show that when they grew the bacteria, it made the antibiotic.

Finding specific molecules like these and studying what they do will help researchers to understand how the microbiome interacts with our bodies, says microbial genomicist Derrick Fouts of the J. Craig Venter Institute in Rockville, Maryland.

“This is a great example of the power of bioinformatics to not merely identify genes of interest from 'big data' 'omics, but to connect together cassettes of genes to increase our fundamental understanding of how commensal bacteria maintain a healthy human microbiome,” Fouts says.

Other researchers say that the paper also demonstrates how the microbiome might be mined for new drugs. Scientists have long argued that the suite of microbes living on human bodies could be a rich source of such drugs, and many drug companies are trying to capitalize on that idea; Fischbach advises two of them.

“To my knowledge, this is the first work that isolates new compounds with strong drug potential from the human microbiome,” says Rob Knight, a microbial ecologist at the University of Colorado, Boulder. “This work provides an exciting platform for mining our microbiomes for new compounds of medical interest.”

A similar drug is in development at Novartis, but Fischbach doesn't plan to develop the antibiotic that he has discovered into a drug. Instead, he wants to find novel types of molecule that are made by the microbiome. Studying these molecules might help researchers to understand how the microbiome influences our susceptibility to disease, he says.

“People are eager to learn what exactly helpful bacteria are doing,” Fischbach says. “Nobody had anticipated that they have the capability to make so many different kinds of drugs. I don’t think this is the only thing they do, but it’s a big thing.”