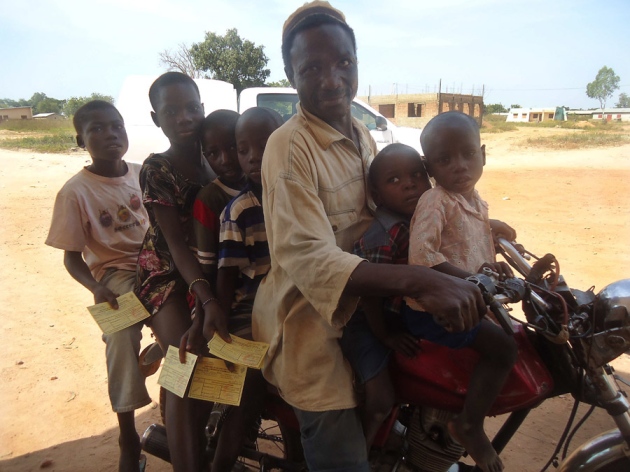 A Benin family takes part in the first test of a novel mass-vaccination strategy.

An immunization campaign in West Africa has shown that vaccines can be delivered to remote areas without using ice boxes, and still remain viable. The finding challenges decades-old dogma that vaccines must be kept cool at every step of the chain from manufacture to use.

Julien Potet, a vaccines-policy adviser at Médecins Sans Frontières (MSF; also known as Doctors Without Borders) in Paris, says that the findings set "a very positive precedent". He recounts how an MSF campaign in Chad in 2010 that vaccinated half a million people against measles required 22,000 ice packs in just 11 days. "If you eliminate the need for icepacks from vaccine carriers in the last stretch of a vaccine’s journey, it would help us reach more kids, much more easily," he says.

The anti-meningitis campaign, carried out in Benin in December 2012 by the country's health ministry and researchers from the World Health Organization (WHO) and PATH, a non-profit body based in Seattle, Washington, tested delivering a vaccine against deadly meningococcal meningitis A that was stored at temperatures of up to 40 °C for up to four days. Its findings, published today in Vaccine1, mark an unequivocal success, with only 9 of the more than 15,000 vials needing to be discarded, none of them for heat damage.

As biological products, almost all vaccines are sensitive to damage from excessive warming or freezing. National regulatory authorities, and the WHO, license them exclusively for use under conditions where they are stored and distributed between 2°C and 8°C, the so-called cold chain.

But many vaccines are actually thermostable outside that range, and some newer ones in particular can often remain viable for days, weeks or even months after exposure to higher temperatures. This has prompted interest in a 'controlled temperature chain' (CTC) that would allow vaccines to be stored for short periods at higher temperatures for the 'last mile' of distribution, something that would be especially helpful in hot developing countries where electricity and refrigeration is lacking. 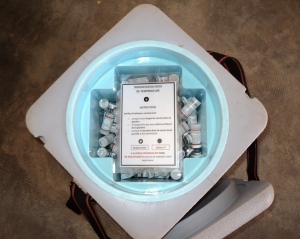 The study used vaccines transported in containers with heat-exposure indicators.

In the Benin trial, health workers delivered MenAfriVac, the first vaccine to get licensing approval for CTC distribution, to more than 155,000 people in 150 villages just using coolers similar to picnic boxes, with no ice. All vials carried stickers that measured the cumulative heat exposure over time and changed colour when a vaccine needed to be discarded. As an extra precaution, the researchers placed inside each cooler a card that changed colour if the peak temperature ever exceeded 40 °C. The results were striking: of the 15,000 vials of vaccine, each of which held 10 doses, none had to be discarded because the stickers or cards indicated that they had exceeded their heat limits. The only vials that had to be thrown out had been stored at room temperature for longer than the approved four days.

The findings mean that countries planning MenAfriVac campaigns can consider using CTCs with the the blessing of regulators and the WHO. Simona Zipursky, a co-author of the study who works in the WHO's Expanded Programme on Immunization, hopes that the study will open the way to other vaccines being approved for CTCs.

"For a long time, there was a feeling that this couldn’t be done,” she says. ”Manufacturers wouldn’t do CTC studies, regulators wouldn’t approve CTC licenses, the WHO wouldn’t develop CTC guidance and countries wouldn’t want to deviate from the dogma of 2–8 °C." Researchers are careful to emphazise, however, that not all vaccines will be amenable to the practice and each vaccine has its own thermostability and therefore will require its own protocols.

The major vaccination players have welcomed the trial's findings. Benjamin Schreiber, who leads work on the cold chain for UNICEF, the United Nations children's charity, says that approved CTC protocols could ease strain on overstretched supply systems. It could also provide important savings, he notes. A study published2 in the Bulletin of the World Health Organization estimated that delivering MenAfriVac using a CTC would cut costs in half.

"In many countries where the cold chain is critical and can be a challenge, this new innovative approach could be a game changer," says Stefano Malvolti, director of vaccine implementation at the GAVI Alliance, a public–private health partnership based in Geneva.