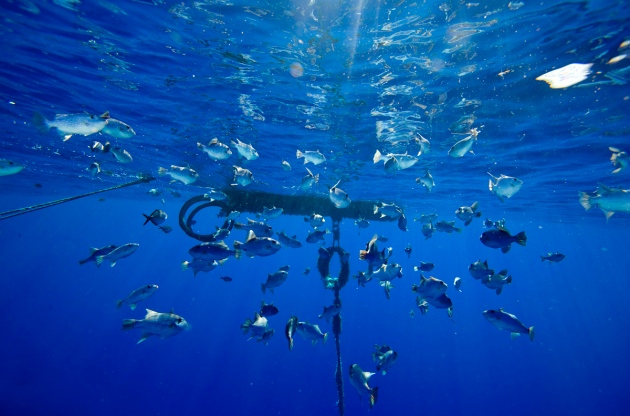 Fish gather next to an illegal fish aggregation device in the waters of Palau.

Across the world’s oceans float thousands of rafts, placed there by fishermen to try and increase their catches. Although this technique has been used for centuries, its increasing prevalence and concerns over the impact this could have on fish stocks are driving calls for restrictions on its use.

At their most basic, the rafts, known as fish aggregating devices (FADs), can be simply floating tree logs, shelters under which fish tend to congregate. Fishermen have long recognized this behaviour, and have created FADs ranging from wooden rafts with ropes hanging below to steel and foam constructions complete with radio transmitters for signalling their location. By some estimates there may be tens of thousands of these devices now deployed. But there is little regulation or monitoring of them.

“The regulation of FADs is something that is a real issue that I don’t think is being addressed,” says Farah Obaidullah, an oceans campaigner at Greenpeace in Amsterdam.

The main concerns of campaigners such as Obaidullah are that FADs assist fishing of populations that are already over-fished, such as tuna, and that they can attract endangered animals, such as turtles, which are then taken up along with the targeted species — a consequence known as 'bycatch'. 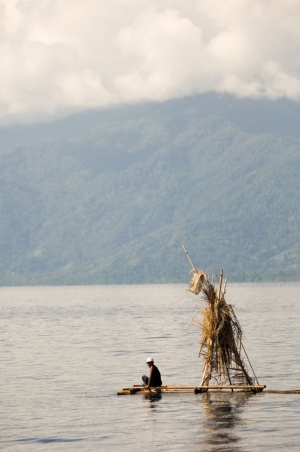 A fisherman sitting on a more traditional form of FAD off West Papua, Indonesia.

Researchers are now increasingly trying to quantify the effects of FADs in an argument that has grown increasingly heated, while largely remaining under the public radar.

“FADs are a concern,” says Tim Davies, a marine-conservation researcher at Imperial College London. “We need to know how they’re being used and their effects on the ecosystem. Those two things, they are pressing issues.”

But Davies does not advocate for a ban on FADs. Although they do have downsides such as bycatch, they can a relatively ‘clean’ form of fishing for tuna compared with methods such as long lines of baited hooks, he says.

In a paper published earlier this month in Marine Policy1, Davies and his colleagues assess the use of these devices in the Indian Ocean. They conclude that the use of FADs has dramatically improved the ability of the tuna fleet in this area to catch fish

But, the authors warn, management of these fishing aids has not kept pace, and there is currently little regulation of when and where they can be used. “Explicit management of the use of FADs is undoubtedly a necessity to ensure future sustainability of the fishery,” Davies and his team write.

A key question about FADs is whether they are encouraging existing fish to school in the shelter they provide, or whether they are actually driving an increase in the number of commercially desirable fish in the sea by providing more suitable habitat.

May Lim, who studies complex systems at the University of Philippines Diliman in Quezon City, and her colleagues have been modelling the effect of FADs in the western Pacific, and published their analysis last week in ICES Journal of Marine Science2. The results suggest that “when the fishery is already overfished, using FADs can only accelerate fisheries collapse”, the authors wrote in an email to Nature.

However, the modelling also indicates that there may be a flipside to FAD use. Lim and her team suggest that FADs could be used to protect fish stocks, by deploying these rafts and then either banning or heavily regulating fishing. This would transform FADs into FEDs: fish-enhancing devices, the researchers suggest. FEDs could protect highly mobile species that are inclined to swim out of traditional marine protected areas, or function as extensions of a reef system.

“FADs and FEDs can benefit small-scale fisheries, if properly managed,” the authors say.