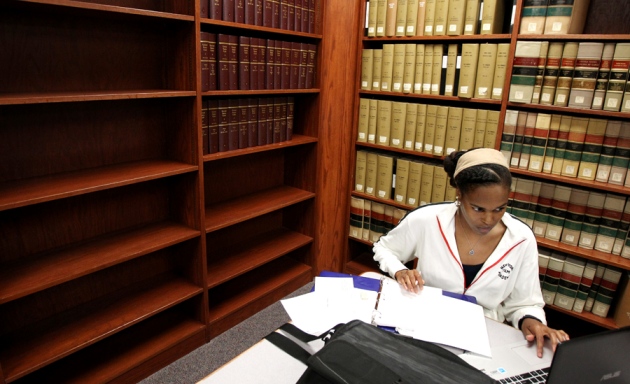 The received wisdom that women are more likely than men to drop out of academia at every stage of a scientific career is now false, psychologists say — at least in the United States. An analysis of survey data finds that, since the 1990s, men and women in the country have converted their bachelor’s degrees into science, mathematics and engineering PhDs at roughly equal rates. The study adds to encouraging signs that fewer women are dropping out of science careers than used to be the case.

“The bachelor’s-to-PhD pipeline no longer leaks more women than men, although it did in the past,” says psychologist David Miller of Northwestern University in Evanston, Illinois, who is a co-author of the study, published on 17 February in Frontiers in Psychology1.

Working with Jonathan Wai, a psychologist at Duke University in Durham, North Carolina, Miller used national surveys of college graduates and doctoral recipients to track cohorts of US science students. More than 4% of male graduates in the physical sciences, engineering, mathematics and computer science who graduated in the 1970s went on to earn a PhD a decade later, the researchers found — compared with less than 3% of female graduates. But for the classes of the 1990s, both men's and women’s conversion rates were around 3%. In the life sciences, the study found similar convergence, but with less statistical confidence that the gap has closed.

Previous studies had underestimated this trend, Miller says, because they directly compared women's share of US bachelor's degrees with their share of doctorates in the same field a decade later. This can be misleading because many US doctorates are now earned by researchers who transferred from different fields, or who obtained their bachelor's degrees outside the United States. 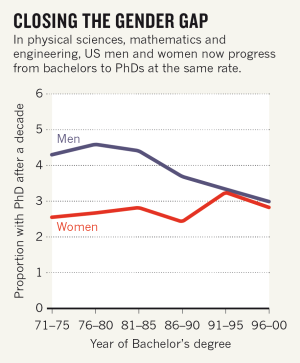 But some people are not sure that the findings are wholly positive: the data suggest that, in many fields, the gender gap has closed mainly because US men are becoming less likely to progress to PhDs. "I don't see a basis for saying things are getting better for women — just worse for men", says Curt Rice, a linguist at the University of Tromsø in Norway who is head of Norway's Committee on Gender Balance and Diversity in Research. But Miller says the data are ambiguous: they could suggest that women have made progress despite falling PhD completion rates.

“These numbers show how unattractive PhDs are becoming for both men and women,” argues Simone Buitendijk, vice-rector of Leiden University in the Netherlands.

Men still hold three-quarters of US PhDs in engineering, mathematics and the physical sciences. But that is largely because many more men than women applied to study them at undergraduate level. “It’s much earlier in life that women think they shouldn’t go into engineering or mathematics,” comments Shulamit Kahn, a labour economist at Boston University in Massachusetts who studies gender differences in academic science but was not involved in the study. “We have to focus on how they perceive these subjects at high school.”

Some progress has been made at other stages of the pipeline. Women still make up less than one-quarter of professors, even though they earn almost half the doctorates in the United States, according to the US National Science Foundation (NSF). But those figures hide a mixed story. Kahn’s research has cast doubt on the existence of a leaky pipeline for the physical sciences post-PhD2. In these fields, women are now just as likely as men to have a tenure-track appointment within five years of their PhD, she says.

Instead, it is in economics, social sciences, life sciences and psychology that women drop out at greater rates after obtaining their PhD, Kahn says. “It is the very fields in which women are best represented that one sees attrition between baccalaureate and assistant professorship,” says Stephen Ceci, a psychologist at Cornell University in Ithaca, New York. Last year, he, Kahn and their colleagues wrote a review of the field, flagging up the difference in gender attrition rates between the physical and life sciences3. “We find women are flocking to other health fields outside academia, such as becoming doctors, dentists or vets,” Kahn adds.

Broad statistics may also be hiding persistent disadvantages for women, especially because not all PhDs and jobs are equally prestigious, says Rice. “The research is important, but they have an insufficiently nuanced conception of the pipeline,” he says.

But even here there are hopeful signs, Miller says. In a separate, unpublished analysis of an NSF survey of earned doctorates, he found that, between 2006 and 2012, women's representation among PhD earners at elite institutions was slightly higher than among all US universities — although those figures include researchers from other countries, so don't necessarily apply to the domestic bachelors-to-PhD pipeline.

Still, Miller agrees that gender bias could be hidden from broad statistics. In recent years, for example, studies have found that elite labs tend to hire more men than women4, and that professors offer lower salaries, and are less willing mentors, to students with female names on their CVs5. “Gender equality in numbers doesn’t necessarily mean gender equality in opportunities,” he says.