Immigration ban Scientists and engineers were among those affected by US President Donald Trump’s decision to close US borders to all nationals from Iran, Iraq, Syria, Sudan, Libya, Yemen and Somalia. The White House said that the ban, enacted on 27 January and active for 90 days, would enhance US national security — but it sowed confusion at airports and drew wide criticism. Many scientists and students were unable to return to their US universities after visiting their home countries, and others cancelled plans for international work. The American Association for the Advancement of Science was one of many organizations to speak out against the ban, calling it harmful to “the free flow of international scientific talent”. An online petition calling for academics to boycott international conferences held in the United States had attracted some 3,000 signatures as Nature went to press.

Trump resurrects opposed oil pipelines US President Donald Trump signed executive orders on 24 January to support construction of the Keystone XL and Dakota Access oil pipelines — a blow to environmentalists and Native American tribes who campaigned against the projects. Trump also signed an order to expedite environmental reviews of such projects. In 2015, former president Barack Obama cancelled the Keystone pipeline, which would transport crude oil from tar sands in Canada to the Gulf of Mexico and is controversial in part because tar-sands oil is more polluting than conventional crude. The Dakota pipeline’s route requires a tunnel beneath a lake by the Standing Rock Sioux Native American reservation, which protesters say could contaminate water sources. 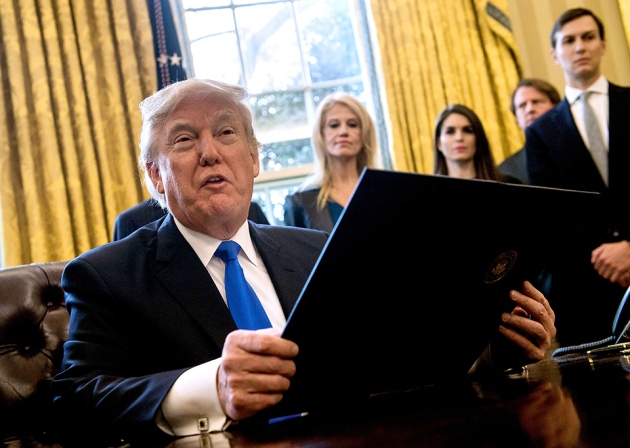 US President Donald Trump signed orders on 24 January to revive the construction of two oil pipelines.

US gagging orders Confusion over what US federal scientists can and cannot say about their research turned to uproar during President Donald Trump’s first week in office. A series of official memos sent to various agencies, including the Environmental Protection Agency (EPA) and the departments of agriculture and of health and human services, ordered restrictions on what could be communicated on social media, in press releases and to reporters or members of Congress. The move provoked criticism (and a proliferation of ‘rogue’ agency social-media accounts), and many of the orders were rolled back within days. But the EPA continued in limbo; Trump’s communications director for the agency told the Associated Press that “everything is subject to review”, including the contents of web pages and the gathering of scientific data. The American Geophysical Union wrote to the EPA on 26 January, saying that such directives “may violate your agency’s scientific integrity policy”.

Treason arrest A leading Russian security researcher has reportedly been detained on charges of treason. Ruslan Stoyanov, who was head of the ‘incidents investigation’ team at the Moscow-based cybersecurity firm Kaspersky Lab, was arrested last December as part of a probe into a breach of state security, according to the Russian newspaper Kommersant. In a 25 January statement, Kaspersky Lab said that it had no details about the investigation, which it says relates to a period before Stoyanov worked at the firm. Kommersant reported that his arrest might be linked to an inquiry into Sergei Mikhailov, a senior official in Russia’s federal security service, the FSB, who was reportedly also arrested in December.

Caffeine-test error Northumbria University in Newcastle, UK, was fined £400,000 (US$500,000) on 25 January, after a botched experiment with caffeine put two students in a life-threatening condition. The students had volunteered to take part in a study to measure the effect of caffeine on exercise performance in 2015. But a calculation error on a mobile phone meant that, instead of 0.3 grams, they were given 30 grams — equivalent to 300 cups of coffee. A dose of 18 grams can be lethal, a court heard. Both students have reportedly made a full physical recovery.

EU nuclear body Scientists reacted with shock at the confirmation by the UK government on 26 January that Britain is set to leave Euratom, Europe’s nuclear body, as part of its Brexit arrangements. The plan was revealed in notes attached to a parliamentary bill that is intended to allow the prime minister to trigger the Brexit process. Euratom ensures compliance with nuclear safeguards, and through it the United Kingdom is a member of the nuclear-fusion experiment ITER in France. The Joint European Torus, a test bed for ITER in Culham, UK, also receives funding from Euratom. The government has not yet indicated what the consequences of pulling out will be, or what future arrangements might be made. The plan’s quiet disclosure angered many scientists.

NASA twin study Preliminary results from NASA’s unprecedented twin study released on 26 January have provided clues about the physical demands of space travel. The study probes genetic differences between two astronauts, Scott Kelly (pictured, right), who spent 340 consecutive days in space in 2015–16, and his identical twin Mark, who was on Earth. Measurements of biological markers taken before, during and after Scott’s mission revealed several changes that could be related to his time in orbit. Scott’s telomeres — the caps on the ends of chromosomes — lengthened in space, the opposite to what scientists had predicted. And larger-than-normal changes in his gene expression could be down to stress factors, such as trying to sleep while floating in space. 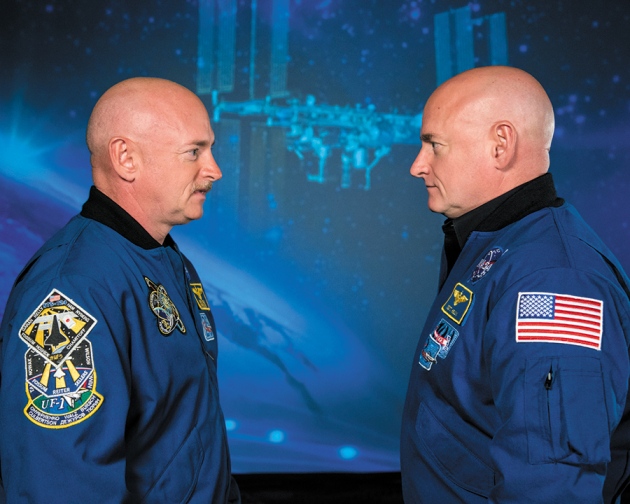 Five get Moon shot Five teams have made the final stage of the Google Lunar X Prize competition, it was announced on 24 January. One of the teams is an international effort; the others are from Israel, the United States, India and Japan. To win the US$20-million grand prize, a team must be the first to launch its lunar craft by 31 December and perform tasks on the Moon’s surface, including roaming and beaming back video. To reach this stage, the teams had to book their launch contracts by the end of last year and have the agreements verified by the X Prize Foundation, based in Culver City, California. The prize was launched in 2007 to encourage innovation in enabling low-cost access to the Moon.

Global-health boost The University of Washington’s Institute for Health Metrics and Evaluation, the world’s premier centre for research into how public-health spending can reduce death rates and disease burden, is to receive a US$279-million cash injection from the Bill & Melinda Gates Foundation in Seattle, Washington.

Dark-matter signal? Astrophysicists have detected an X-ray signal from the edges of the Milky Way that could have resulted from the decay of a dark-matter particle. Using observations by NASA’s Chandra X-ray Observatory of the Galaxy’s ‘halo’ — the part of the sky away from the visible region of the Milky Way — researchers detected a peak of X-ray photons at about 3.5 kiloelectronvolts of energy. A theorized dark-matter particle called a ‘sterile neutrino’ could produce a pair of such photons when it decays. Similar signals have been spotted from several galaxy clusters and from the Milky Way’s centre, but their dark-matter origin has remained controversial. The work, which has not been peer-reviewed, was posted online on 27 January (N. Cappelluti et al. Preprint at https://arxiv.org/abs/1701.07932; 2017).

On 26 January, the Bulletin of the Atomic Scientists moved the hands of its symbolic Doomsday Clock 30 seconds closer to midnight — signalling the greatest threat of apocalypse since 1953. Governments’ “reckless” talk about nuclear weapons and a growing disregard for scientific expertise pushed the clock hands to 2.5 minutes to midnight. A move of less than a full minute is unprecedented, a decision that the Bulletin explained simply: “Donald Trump has been the US president only a matter of days.” 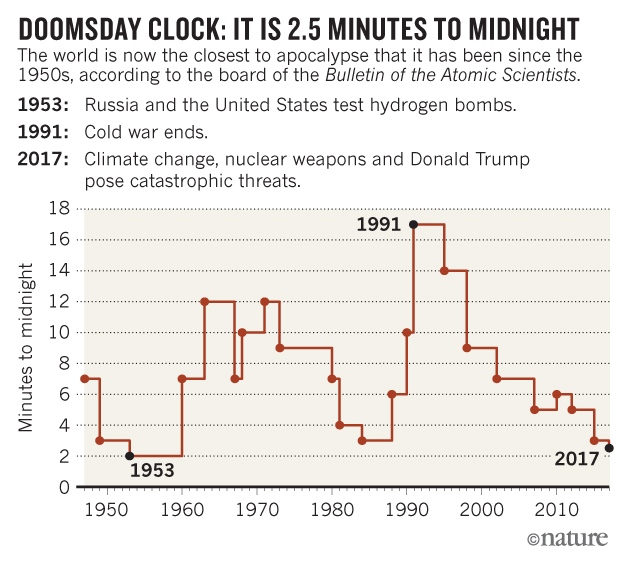 2–5 February
The evolution of addiction treatment is discussed at a conference in Los Angeles, California.
go.nature.com/2jpi0le

5–9 February
Faecal transplants and inflammation-driven cancer are on the agenda at the Microbiome in Health and Disease meeting in Keystone, Colorado.
go.nature.com/2jy1z63