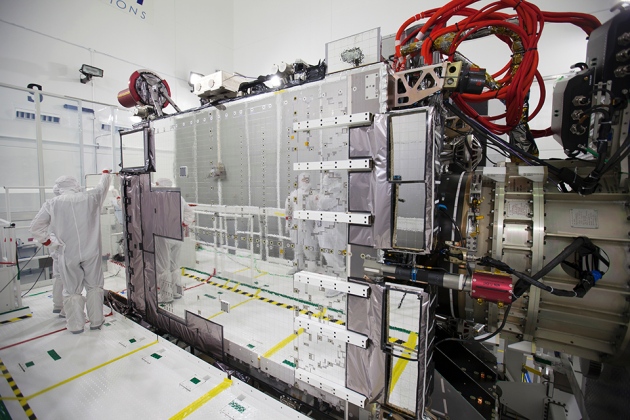 The most scientifically capable weather satellite the United States has ever launched is slated to soar into orbit on 19 November. From its vantage point 35,800 kilometres up — nearly one-tenth of the way to the moon — the Geostationary Operational Environmental Satellite-R Series (GOES-R) will snap images of weather and atmospheric phenomena as they roll across the United States.

GOES-R can take pictures as often as every 30 seconds, much faster than the several-minute intervals of current GOES weather satellites. That rapid-fire imagery allows the satellite to track developing changes in thunderstorms, hurricanes and other severe storms. It also enables meteorologists to follow plumes of wildfire smoke or volcanic ash as they spread. And it helps emergency responders to better prepare for where to deploy resources as a storm advances, says Louis Uccellini, director of the National Weather Service.

The next-generation satellite can also take pictures with a sharper focus and in a broader range of wavelengths than the current GOES satellites. “It’s like going from black-and-white to a super-high-definition television,” says Stephen Volz, an assistant administrator with the National Oceanic and Atmospheric Administration (NOAA) in Silver Spring, Maryland.

GOES-R is comparable to the Japan Meteorological Agency’s Himawari-8 satellite, which launched in 2014, and Himawari-9, launched on 1 November. All carry an advanced imaging instrument that observes Earth in 16 different wavelength bands, ranging from visible to near-infrared, for different views of atmospheric phenomena. Already, the images produced by Himawari-8 are enabling meteorologists to precisely measure the spread of pollutants across East Asia1.

US meteorologists have been testing the new forecasting capabilities of GOES-R with the two current GOES satellites (there are always two operational at any given time: one positioned over the eastern United States and one over the west). At various points over the past several years, including during Hurricane Sandy in 2012, NOAA switched one of the GOES into an experimental super-fast scan mode that refreshed data as fast as every minute.

By examining these test data, forecasters could better identify the beginnings of strong atmospheric mixing, a precursor to severe storms2, and track wildfires as they developed — sometimes dispatching firefighters before anyone even called for help3. Other tests tracked the appearance and decay of fog at major airports, helping flight controllers to more efficiently route planes in and out.

GOES-R has other jobs as well. It carries a suite of updated space-weather instruments to measure particles streaming from solar outbursts. It also has a sophisticated lightning mapper to catalogue flashes day and night every 20 seconds or faster.

All this technology comes at a price: nearly US$11 billion in total for GOES-R and the three similar satellites that will follow it sequentially through the year 2036.

After launch, GOES-R will go into a temporary orbit as operators calibrate its instruments. Then NOAA will guide it into a permanent position over either the eastern or western part of the country.