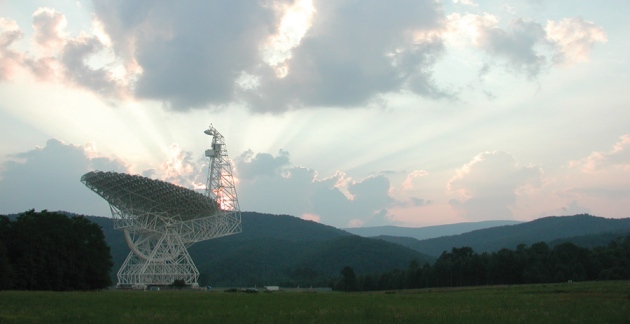 Astronomer D. J. Pisano got to spread some good news last month. He and his colleagues at West Virginia University in Morgantown announced a US$500,000 grant from the National Science Foundation (NSF). The money will allow his team to build an antenna-like detector to speed up sky surveys at the Green Bank Telescope (GBT), the nearby 110-metre-wide radio dish that is the largest steerable radio telescope in the world.

There is just one problem. Even as the NSF funding goes towards improving the telescope, the agency is trying to get rid of it.

Following an independent ‘portfolio review’ in 2012 (see Nature 488, 440; 2012), the NSF is exploring closing the GBT and nine other telescopes it operates (see ‘Closing time’). The alternative is to find partners to share the cost. West Virginia University has already shelled out $1 million to buy time on the GBT to bolster its growing astronomy faculty — a first hint of what a future for these jettisoned telescopes might look like.

Still, such partnerships are frustratingly hard to achieve. Last month, the NSF reported that, thanks to the slow pace of discussions and the complex environmental reviews required to shut national facilities, it is not close to making any permanent decisions. That leaves the future of the telescopes in limbo — and puts the careers of astronomers such as Pisano on edge. “We were obviously upset by it, we were somewhat confused,” he says.

For the NSF, there is some urgency to replace the old with the new. By offloading the old telescopes, the agency could free up about 10% of its $233-million astronomy budget. That would allow more money for research grants. More importantly, it would regain money for future telescopes, such as the Large Synoptic Survey Telescope, which astronomers are slated to begin building in Chile this year (see Nature 505, 461–462; 2014). “Our job is to foster frontier science,” says James Ulvestad, who heads the NSF’s astronomy division. “Within a constrained budget there is nothing you can do that isn’t going to hurt somebody.”

Among the possible closures, the GBT stands out: it first saw light only in 2000 and still produces high-quality science. “It’s too early to be considering shutting this instrument down,” says Anthony Beasley, director of the National Radio Astronomy Observatory (NRAO) in Charlottesville, Virginia, which operates the facility. “The GBT hasn’t hit strong middle age yet.”

The GBT is in the mountains of West Virginia, near the heart of a federally designated ‘radio quiet zone’, where radio broadcasts and similar transmissions are banned. Visitors must use old-fashioned pay phones to make calls out of the rural valley. The area, known as Green Bank Observatory, is ideal for radio astronomy: in 1960, astronomer Frank Drake conducted the first search for extraterrestrial intelligence using the observatory’s Howard Tatel telescope.

When the GBT was completed 14 years ago, it became the premier telescope at the observatory. But it took some time to hit its stride. The circular track on which the 7,300-tonne dish sits deteriorated faster than expected, and had to be replaced in 2007. Soon afterwards, scientists extended the high-frequency end of the telescope’s observing range to 100 gigahertz, at which it can probe dense gas in galaxies and inter­stellar molecules.

Today, the GBT is known for its wide range of wavelengths, its high angular resolution and its ability to point to 85% of the sky. Pisano uses it to map hydrogen gas within and between galaxies (see S. A. Wolfe et al. Nature 497, 224–226; 2013), and pulsar astronomers use it to clock the millisecond flashes coming from spinning neutron stars. This month, a team led by the NRAO’s Scott Ransom reported discovering such a millisecond pulsar. It is accompanied by two white dwarf companion stars, a rare triple system that could allow scientists to test a particular aspect of general relativity (see S. M. Ransom et al. Nature 505, 520–524; 2014).

“It’s too early to be considering shutting this instrument down.”

Ransom is part of a worldwide consortium of astronomers who hope that, by looking for tiny variations in the rotation rate of pulsars, they can be the first to detect long-sought gravitational waves rippling through the fabric of space and time. The North American part of that hunt relies on the GBT and the 305-metre-wide Arecibo radio telescope in Puerto Rico. Arecibo has a larger dish than the GBT but it is fixed, so it sees a smaller fraction of the sky, and follows fewer pulsars. “In my opinion, the GBT is the best pulsar telescope in the world,” Ransom says.

Still, the NSF says that it cannot afford the roughly $8 million required to operate the GBT annually. It needs partners to contribute at least half of that cost, says Ulvestad — otherwise, observing time on the telescope could be cut back, or the facility could be mothballed or even dismantled.

In theory, West Virginia University could become a senior partner in managing the Green Bank site, or even take over operations itself. The state has powerful political advocates in its two Democratic senators Jay Rockefeller and Joe Manchin, who helped to steer the university’s $1 million towards the GBT. More money may eventually be forthcoming, but discussions with the NSF are essentially on hold, says physicist Earl Scime, the interim associate vice-president for research at West Virginia University. The university is waiting to see which organization bids to manage the NRAO after the current agreement expires in 2015; an announcement for that competition is expected in the coming months.

For Pisano, there is little to do but wait and see. Since joining West Virginia University five years ago from the NRAO, he has spent an average of 350 hours a year observing with the GBT. He says: “Having done some great science with that telescope, I would hate to see it go.”