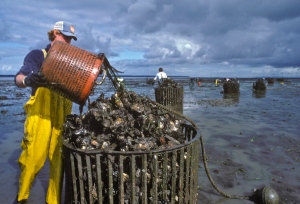 As leading producer of farmed shellfish in the US, Washington's industries are being adversely affected by ocean acidification

Washington state, the leading US producer of farmed shellfish, today launched a 42-step plan to reduce ocean acidification1. The initiative — detailed in a report by a governor-appointed panel of scientists, policy-makers and shellfish industry representatives — marks the first US state-funded effort to tackle ocean acidification, a growing problem for both the region and the globe.

The state governor Christine Gregoire,  says she will allocate $3.3 million to back the panel's priority recommendations.

“Washington is clearly in the lead with respect to ocean acidification,” says Jane Lubchenco, administrator of the US National Oceanic and Atmospheric Administration (NOAA).

As growing carbon dioxide gas emissions have dissolved into the world’s oceans, the average acidity of the waters has increased by 30% since 1750. Washington, which produces farmed oysters, clams and mussels, is particularly vulnerable to acidification, for two reasons: seasonal, wind-driven upwelling events bring low-pH waters from the deep ocean towards the shore, and land-based nutrient runoff from farming fuels algal growth, which also lowers pH.

As a result, the region is already experiencing levels of acidity three-fold greater than the global ocean average, with devastating impacts on the state’s US$270-million shellfish industry. Acidic waters are corrosive to many larval shellfish, and they reduce the amount of available carbonate, which some marine organisms need to form calcium carbonate shells or skeletons.

The panel recommends creating of an "acidity" budget to account for natural and human-influenced sources of acidity; improved methods of forecasting corrosive conditions; and finding ways to use sea grasses to soak up carbon dioxide in shellfish hatcheries.

Improved monitoring will be crucial for better understanding acidification trends, its contributing factors and the biological responses of marine organisms. “We lack real-time, high resolution data — which is key because conditions are so variable,” says panel member George Waldbusser, a marine chemist at Oregon State University in Corvallis.

Sensors to measure pH and carbon dioxide abundance have so far been added to 17 existing observing systems nationally, says Dick Feely, a panel member and marine chemist with the NOAA Pacific Marine Environmental Laboratory in Seattle, Washington. The NOAA plans to have 60 such monitoring sites nationally in the next few decades. “It’s an early warning system we’re trying to put together to help industry adapt to changing, sometimes severe, conditions,” says Feely.

The effort to find comprehensive, creative solutions regionally is impressive, says Scott Doney, a marine chemist at the Woods Hole Oceanographic Institution in Massachusetts, who was not involved with the panel. “It’s interesting how they tailored applied science to help aquaculture with a broader research agenda to understand the factors affecting the shellfish industry,” he says.

Despite the report’s regional focus, the authors clarify that the most urgent need is to reduce global carbon dioxide emissions. “Reducing carbon emissions is crucial, but it’s not a problem that Washington alone can solve,” says panel co-chair Jay Manning, an environmental lawyer at Cascadia Law Group in Olympia, Washington, and former director of the Washington Department of Ecology.

Lubchenco emphasizes that the report highlights the need to formulate adaptation strategies to ocean acidification as well as the urgency to create a stronger momentum to reduce global carbon emissions. "We don't have the luxury of doing one or the other," she says. "We have to do both."