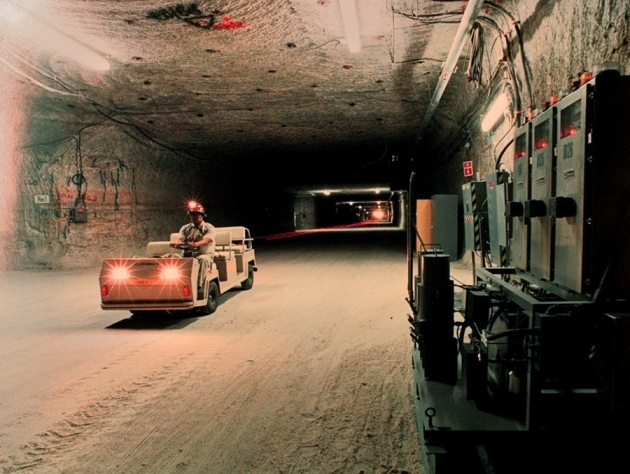 A radiation leak has raised questions about the safety of the United States’ only deep nuclear-waste repository, and has given fresh voice to scientists calling for more research into underground waste storage.

On 14 February, radioactive plutonium and americium leaked out of the Waste Isolation Pilot Plant (WIPP) near Carlsbad, New Mexico, where thousands of drums of contaminated material from the US nuclear-weapons programme are stored in salt beds more than half a kilometre below the surface. The health and environmental impacts seem to be minor, but 13 employees have tested positive for low-level contamination. The Department of Energy (DOE) and its contractors are still working on a plan to re-enter the WIPP and find out what caused the leak.

The incident also brings renewed attention to a problem that policy-makers have been avoiding: what to do with a mounting stockpile of spent fuel from commercial reactors, which is currently stored at reactor sites. In 2010, the DOE mothballed plans to develop Yucca Mountain in Nevada, which since 1987 had been designated as the future site of an underground repository (see Nature 473, 266–267; 2011). Researchers at the DOE and universities want to explore a variety of alternatives. But they say that they have been hobbled by small budgets and the Nuclear Waste Policy Act, which prevents the DOE from investigating any specific site apart from Yucca Mountain.

“Basically, all of the old ideas have come back out of the woodwork,” says Michael Driscoll, a nuclear engineer at the Massachusetts Institute of Technology in Cambridge. “But the first thing we need is Congress to wrestle with this and revise the Nuclear Waste Policy Act.”

For now, researchers are pursuing generic repository science that does not conflict with the law. In one large proposed experiment, DOE scientists wanted to assess whether salt beds at the WIPP could store radio­active waste that is hotter than the material they currently hold. In 2011, the team began developing a US$31-million experiment that would have tested how the salt deforms when it is heated, and how water moves through it.

“Basically, all of the old ideas have come back out of the woodwork.”

Other researchers are investigating the concept of dropping cylinders of nuclear waste into 5-kilometre-deep boreholes in hard rock such as granite. Sandia National Laboratories in Albuquerque, New Mexico is leading a consortium of researchers and companies seeking to drill an experimental borehole costing approximately $25 million. The hot-salt and borehole proposals are now competing for funding within the DOE’s relatively small $15-million annual budget for this kind of research. “Big tests like either of those would completely overwhelm the current budget,” says Peter Swift, who heads the DOE’s nuclear-waste science programme at Sandia.

In Europe, scientists have developed expertise with other types of rock. Finland and France have homed in on proposed underground repositories in granite and shale, respectively. Germany has buried low- and medium-level wastes in underground domes of salt, and it is evaluating the terrain for a controversial high-level waste repository.

International collaboration gives researchers access to the basic science on all of these environ­ments, says Jacques Delay, secretary-general of the Implementing Geological Disposal of Radioactive Waste Technology Platform in Bure, France, a consortium that guides a roughly €10-million (US$14-million) joint research programme under the European Commission. “What is tricky is to make the link between the academic science and our projects,” he says.

But basic research can go only so far, because the scientific assessment of repository safety is specific to local geology. After choosing a site, researchers must study the density, porosity and heat conductance of the rock there, and characterize any fractures and groundwater movement. Modelling and experiments help to determine how the rock will respond to the heat generated by the nuclear waste.

The United States spent more than $15 billion on Yucca Mountain before then-energy secretary Steven Chu pulled the plug, saying that the site was not a “workable option” — broadly interpreted to mean that it was doomed politically, if not technically. The United States has evaluated few alternatives. The city of Carlsbad, which hosts the WIPP, is politically inclined to expand its nuclear-waste portfolio. But few other communities have shown interest in storing nuclear waste.

Some DOE researchers favour a serious exploration of borehole disposal, in part because no one has tested the idea, which dates back to the 1970s. Swift estimates that just 800 boreholes would take care of the existing US waste stockpile, as well as spent fuel from current reactors until about 2050. There is suitable rock at various depths across the country. “You could spread these things out, and you wouldn’t have to put all of your money on one site,” says Patrick Brady, a geochemist at Sandia who is part of the lab’s borehole consortium.

Drilling constraints might limit these boreholes to less than 50 centimetres in diameter, so spent fuel rods, currently stored in large canisters, would need to be repackaged. However, a hole that size would be perfect for a major source of waste that the DOE is trying to dispose of: 2,000 highly radioactive capsules containing caesium and strontium from the Hanford Site, a decommissioned plutonium-production facility in Washington state. These capsules are 52–56 centimetres long and up to 9 centimetres in diameter, and they contain 38% of Hanford’s radioactivity. Swift says that they could all fit into a single borehole.

With research worldwide concentrating on underground repositories, Swift says that it is time to try a new concept: “If we make a borehole, it will be the one that the rest of the world comes and looks at.”