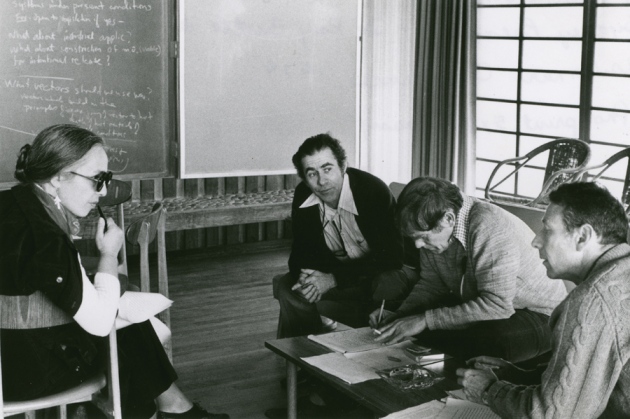 The 1975 Asilomar conference helped set rules for research on DNA.

The initiative follows the April announcement that researchers had used a gene-editing system called CRISPR-Cas9 to remove a mutated gene from a human embryo. The work involved a small number of embryos and was only partially successful, but it has sparked wide debate about the ethics of editing human genomes in ways that can be passed on to future generations.

Although researchers and ethicists disagree on whether such research should continue, most agree that its ethical and legal ramifications should be discussed further before a modified embryo is implanted into a human. Many countries ban human germline editing outright. The United States forbids the use of federal funds for such research, although it is legal in most US states.

The academies will hold an international summit this autumn, including scientists, ethicists, patients' groups and others yet to be determined. The academies will also establish a working group to study the ethical, legal, social and scientific issues involved in germline editing and develop a consensus statement on the practice. A separate advisory committee will be appointed to guide future decision-making. An NAS spokesperson says that the academies expect to announce the members of these committees in a few months.

“​I am delighted that the NAS and the NAM are leading a discussion of these important issues,” says Jennifer Doudna, a biochemist at the University of California, Berkeley, and an inventor of the CRISPR technique, who has called for more discussion on the ethics of editing the human genome. “This is indeed the kind of response we hoped to trigger,” she adds. “Whether a larger or more public forum is needed depends on how the initiative proceeds.”

The NAS sees the effort as similar to the landmark 1975 Asilomar conference. Then, scientists and ethicists agreed to suspend research that involved mixing DNA from multiple species until new guidelines could be drawn up to ensure the safety of such practices.

But there are important differences between the Asilomar era and today, says NAS president Ralph Cicerone. In 1975, few researchers were pursuing recombinant DNA research, whereas modern genome-editing techniques are easy to use and thus widely accessible. The situation calls for a review that is “really more international than Asilomar ever had to be,” Cicerone says.

Others reject the idea that Asilomar should be the model for all such bioethics debates. “That was not an inclusive meeting,” says Marcy Darnovsky, director of the Center for Genetics and Society in Berkeley, California.  “It was an effort at fending off any sort of binding policy in favour of self-regulation.”

The debate on human germline editing, she says, needs to engage people outside the scientific community, including politicians, religious groups and human-rights organizations, among others. The science academies' panel should be one among many forums for public discussion on the issue, Darnovsky adds.

Cicerone says that the NAS and the NAM will reach out to science academies in other countries, and to physicians who might get demands for gene-editing technologies from patients worried about passing genetic diseases on to their children.

Biochemist Paul Berg at Stanford University in California, who organized the Asilomar conference, agrees. “The idea is to get the idea out, and to get it out by a highly focused conference with the expectation that this is going to resound much louder and wider,” he says. ”Then there will be different ways of dealing with those [ideas].”