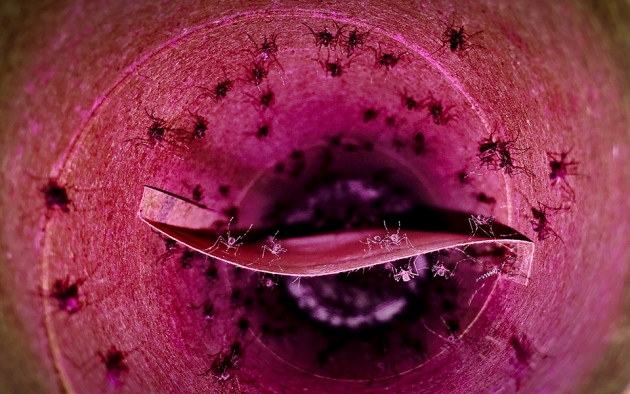 The United States could soon become the first country to approve the commercial use of a common bacterium to fight the spread of mosquitoes that can transmit viruses such as Zika, dengue and Chikungunya.

The US Environmental Protection Agency (EPA) is reviewing an application from the biotechnology start-up MosquitoMate to use the bacterium Wolbachia pipientis as a tool against the Asian tiger mosquito (Aedes albopictus). The company plans to market Wolbachia as a pesticide — one that kills only mosquitoes, and leaves other insects untouched. The EPA’s decision on the matter will come after a public-comment period that ends on 31 May.

MosquitoMate’s strategy involves rearing mosquitoes infected with a particular strain of Wolbachia and releasing the males into the environment. When these male mosquitoes mate with wild females who do not carry the same strain of Wolbachia, the resulting fertilized eggs don’t hatch, because the paternal chromosomes do not form properly. As infected male mosquitoes continue to be released to breed with wild partners, the pest population dwindles.

Eight countries have now reported cases of microcephaly or other fetal birth defects that are probably caused by Zika, leading officials in many areas to consider new options for reducing mosquito populations. “We need as many effective tools as we can get, so we need to give Wolbachia a try,” says Tom Scott, an entomologist at the University of California, Davis. “That will require a well-developed plan for how trials would be done.”

MosquitoMate is also using Wolbachia to target the mosquito Aedes aegypti, which is thought to be the main vector for Zika. The firm began field trials this month of infected A. aegypti mosquitoes in Clovis, California, and has applied to conduct similar tests in Florida and in Orange County, California.

Other groups are also investigating Wolbachia’s ability to stamp out A. albopictus. Researchers from Sun Yat-sen University in Guangzhou, China, and Michigan State University in East Lansing began field trials of Wolbachia-infected mosquitoes last year on Shazai Island in Guangzhou.

In March, the tests expanded to Dadao Island, also in Guangzhou. The researchers are releasing 1.5 million male A. albopictus per week, with plans to increase that to 5 million per week by the end of August. “Our mosquito factory is currently the largest one in the world,” says Zhiyong Xi, a medical entomologist and microbiologist at Michigan State, who oversees the project.

“We need as many effective tools as we can get.”

But such large, ongoing releases of mosquitoes may be too expensive for many countries or cities. With this in mind, the non-profit international collaboration Eliminate Dengue is testing an approach that requires the rearing of many fewer mosquitoes. Instead, it uses a starter set of mosquitoes that carry Wolbachia to infect an entire wild population.

The resulting offspring harbour the bacteria yet develop normally. But the Wolbachia infection prompts an immune response and consumes key cellular resources, which helps to prevent viruses — such as Zika and dengue — from growing and replicating in these mosquitoes (H. L. C. Dutra et al. Cell Host Microbe http://doi.org/bhsh; 2016).

“We’re not trying to kill or suppress the mosquito population, we’re just making them ineffective at transmitting a range of pathogens to people,” says Scott O’Neill, head of Eliminate Dengue and dean of science at Monash University in Melbourne, Australia. The group is testing the technology against A. aegypti in open trials in Indonesia, Vietnam, Australia, Brazil and Colombia. O’Neill hopes to make the system affordable for developing countries at a cost of about US$1 per person.

But using Wolbachia to suppress or infect mosquito populations has never been proved to reduce the incidence of Zika or dengue in humans. O’Neill says that the Eliminate Dengue group has seen “a collapse of dengue transmission” where it has released Wolbachia-infected mosquitoes. The group is trying to verify those observations with controlled, randomized studies that are now under way in Indonesia and Vietnam.

So far, tests of mosquitoes infected with Wolbachia have prompted little public resistance. By contrast, US residents have used yard signs, social-media campaigns and a petition to protest against proposed trials of genetically engineered mosquitoes developed by Oxitec of Milton Park, UK. Oxitec and MosquitoMate each alter male mosquitoes using a lethal reproductive weapon before releasing them into the environment to mate with and suppress their own kind. But Oxitec modifies its mosquitoes with a gene, whereas MosquitoMate uses a bacterium.

The US Food and Drug Administration, which is considering Oxitec’s proposal for a field trial in Florida, received more than 2,600 public comments on the plan. But as Nature went to press, the EPA, which is accepting public input on MosquitoMate’s plan until 31 May, had received just one comment.