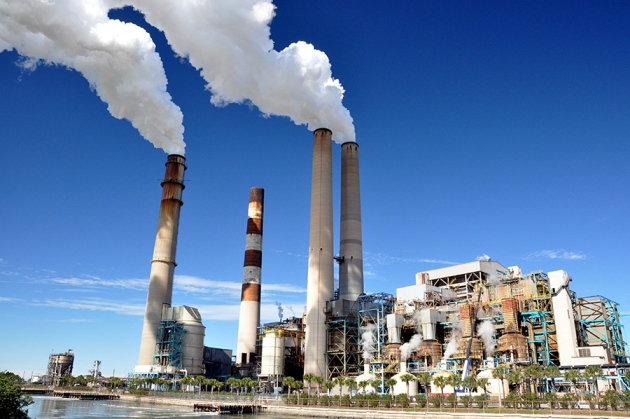 A carbon tax would increase the cost of energy from power stations that run on coal.

A group of senior US Republicans has proposed an entirely sensible climate policy: put a substantial and steadily rising tax on carbon, and then send the proceeds back to citizens to offset the economic pain of higher energy prices. It is dubbed a conservative solution for climate change and, if implemented properly, could represent just that. Unfortunately, these stalwart conservatives — led by the likes of James Baker, who served as secretary of state under president George H. W. Bush, and Henry Paulson, who headed the Treasury under George W. Bush — hark from another era. The Republicans who currently control both chambers of the US Congress and the White House are dismissive of, if not openly hostile towards, climate policy — be it conservative, sensible or any other kind.

The Republicans behind the proposal, who have formed what they call the Climate Leadership Council, briefed US President Donald Trump’s staff on the idea last week, and called the response “encouraging”. White House officials were less enthusiastic in their statements to the press, and there is no indication that the proposal is going anywhere anytime soon. Republicans on the House science committee spent the bulk of a hearing last week on the role of the US Environmental Protection Agency raising questions about climate science and the full suite of regulatory activities at the agency.

Nonetheless, there is plenty for conservatives to like in this proposal. Most importantly, it would scrap the patchwork of climate regulations that former president Barack Obama put in place, including complex rules intended to curb carbon pollution from new and existing power plants. Rather than regulating business behaviour from on high, the carbon tax would shift the economics to account for the dangers of greenhouse gases. Starting at US$40 per tonne of carbon dioxide and rising over time, the tax would hit coal users hardest, followed by oil and natural-gas users. Renewable energy sources and nuclear power would become more competitive. This would give the business sector a powerful incentive to switch fuels and invest in research and development that would drive clean-energy prices down even further.

The proposal also caters to the conservative mindset by ensuring that the carbon tax is revenue-neutral — meaning that it won’t lead to an increase in revenue to be spent by ‘big government’. An unrelated analysis of carbon tax options by the US Department of the Treasury, released in January, suggests that 70% of Americans — those at the lower end of the income spectrum — would actually benefit from such a framework, because they use less energy. Finally, the council’s plan would address issues of international competitiveness by levying fees on imports from countries that do not have comparable policies. Similarly, US businesses would receive rebates on carbon taxes they have paid when exporting to those countries. This would help to ensure that US businesses are not at a disadvantage — ‘American first’, in the Trump mindset — while encouraging other countries to act as well.

“A carbon tax would give the business sector a powerful incentive to switch fuels.”

Economists have long preferred the carbon tax as a simple and efficient way of reducing emissions, but the idea has struggled to gain ground among policymakers. Australia instituted a carbon tax starting at roughly Aus$24 (US$18) per tonne of CO2 in 2012, only to repeal it less than two years later. In Canada, British Columbia has a carbon tax of around Can$30 (US$23), and Alberta initiated a Can$20-per-tonne tax this year. But more often, governments have opted for a carbon-trading system such as that of the European Union. China is rolling out what could become the world’s largest carbon-trading system this year. Such cap-and-trade systems provide more certainty because they set an upper limit on emissions, but they do not necessarily send a stronger signal to the business sector than does a carbon tax. The carbon price in Europe is currently below €4 (US$4.2) per tonne.

The Climate Leadership Council cites relevant studies to argue that its tax-and-dividend plan would do more to reduce greenhouse-gas emissions than Obama’s regulations. That may well be true, because a comprehensive carbon tax would affect all sectors of the economy. Of course, the reason Obama took the regulatory route in the first place was that Republicans in Congress declined the Democrats’ proposal for a national cap-and-trade system in 2009. Republicans have yet to make a counter offer, but this would be a good place to start — if and when they decide to face up to the risks posed by global warming.